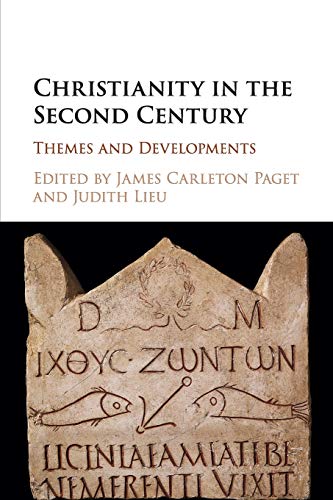 Christianity in the Second Century: Themes and Developments

Studies on second century Christianity are drawing greater attention. This time period is recognized as one in which Christian identity was being defined. The apostles were gone, persecution had increased, and the Christian faith was distinguishing itself from a much larger Judaism. Frequently, the second century has been viewed to be a time when the church moves to being more institutionalized and strengthens itself against heretics. New research, however, has argued that there was a greater diversity within this period than was previously thought. New questions about this century include whether there was a predominant Christian narrative or no narrative, whether Christianity represented a distinct voice or was an expression of wider movements in the second century, what texts describe it best, what role do texts like those from Nag Hammadi have, and what characteristics define Christian identity. These can be added to traditional concerns such as the relationship between Judaism and Christianity and the development of institutionalization.

Christianity in the Second Century is a compilation of papers that were presented at a conference called “The Christian Second Century” which was held at the Centre for Research in the Arts, Social Sciences and Humanities at the University of Cambridge in 2013. The book is composed of 18 different articles which are divided into the following different sections: (1) contexts, (2) discerning continuity and discontinuity in early Christianity, (3) interpreting texts and engaging in practice, and (4) modelling identities. The authors include a large number of established international scholars largely from the United Kingdom but also from Norway, Belgium, and the United States.

The first section contains four articles regarding the context of the second century. In “Empires, Diasporas and the Emergence of Religions,” Greg Woolf identifies the second century as being an age of empires. He draws attention to the changing political structures at this time, which influence one’s evaluation of Christianity in that time period. Instead of seeing Christianity and other religions forcing their way into history against the social climate, Woolf views religions as fitting into the changing power dynamic. His article also challenges the viewpoint that Christianity is exceptional. He advocates for an evolutionary approach to religious change happening at the time.

Several articles support a greater sense of continuity within early Christianity. James Carleton Paget evaluates the second century from the perspective of the New Testament. He rightly points to how this time period can date the New Testament documents and define the narrative of Christian history. He also discusses the terms trajectory and reception that have been used in the understanding of second century Christianity. Rather than separating the first and second centuries from each other, Paget supports viewing these centuries together. In his article, “Continuity and Change in Second-Century Christianity: A Narrative Against the Trend,” Lewis Ayres supports continuity between the two centuries. He advocates for one late second-century tradition, the tradition of the “proto-orthodox.” This is in contrast to Sethian or Valentinian Gnostic traditions. He effectively counters the trend to find more diversity rather than unity within the life of the early church, advocating for unity of thought over a core amount of ideas in early Christianity.

In contrast to Paget and Ayres, the final essay in the section, Winrich Löhr’s “Modelling Second-Century Christian Theology: Christian Theology as Philosophia,” proposes the contrary. Löhr advocates for more diversity within early Christianity. He bases his conclusion on the parallels with the concept and practice of second century philosophia. He believes that this should be the starting point for evaluating Christian theology.

Two articles within the second section provide fresh viewpoints about Gnosticism. In “‘The Gnostic Myth’: How Does Its Demise Impact Twenty-first Century Historiography of Christianity’s Second Century,” Karen King advocates for a complex mapping of second century Christian texts. She finds early Christianity more dynamic and multi-faceted. Mark Edwards, in “The Gnostic Myth,” addresses false views of the character of Gnosticism which have emerged from a failure to grasp the allegorical mood of Gnostic myth.

This second section of Christianity in the Second Century illustrates the diverse perspectives in the field. These articles will provide a good beginning point for those wishing to explore the aspects of unity and diversity within early Christendom.

The third section contains four articles focused on the theme “Interpreting Texts and Engaging in Practice.” Rebecca Fleming, in “Galen and the Christians: Texts and Authority in the Second Century AD,” provides a fresh look at one of the secular sources that refers to Christians in the second century the most. Galen viewed Christians as being a philosophical school, and Fleming argues for understanding this in relation to his understanding of authority, ideas, and identity. She concludes that Christianity is not a unified and homogeneous movement as may be expected from Galen’s comments.

The final two articles in the section look at Graeco-Roman religious experience. Teresa Morgan argues, in “Belief and Practice in Graeco-Roman Religiosity: Plutarch, De Iside and Osiride 379c,” that it mattered what Greek and Roman worshippers believed more than what has normally been assumed. With a focus on content, her article provides an intriguing parallel between Christianity and Greco-Roman religion in the second century. She argues that Christian understanding of belief should be seen along a shared spectrum of religious thinking instead of a drastic departure from Graeco-Roman religious expression. The final article in this section, by Laura Salah Nasrallah and entitled, “Lot Oracles and Fate: On Early Christianity among Others in the Second Century,” looks at the lot oracle found at Kremna in southwest Asia Minor. She finds that the content of this oracle allows one to reflect further on the relationship between doctrine and practice and the characterization of the second century as an “age of anxiety.”

Five articles are found in the final section entitled “Modelling Identities.” The first two articles concern ethnic identity. In “Christians as a ‘Third Race’: Is Ethnicity at Issue?” Erich Gruen examines whether ethnicity can be applied to Christians as a third race between Jew and Greek. Oskar Skarsaune in “Ethnic Discourse in Early Christianity” examines the same topic. Both articles look at an extensive number of sources that are Greaco-Roman, first century Christian sources like Colossians and 1 Peter, and then second century sources such as the Epistle to Diognetus, the Kerygmata Petrou, the Apology of Aristides, writings from Nag Hammadi, Martyrdom of Polycarp, Justine Martyr’s Dialogue with Trypho, Tertullian’s Ad Nationes, and Origen’s Homilies. Gruen and Skarsaune conclude that Christianity as a “third race” cannot be supported.

John North, in “Pagan Attitudes,” and Tim Whitmarsh, in “‘Away with the Atheists!’ Christianity and Militant Atheism in the Early Empire,” examine secular attitudes towards Christianity in the second century. North evaluates Lucian’s Peregrinus as displaying pagan attitudes to Christianity. Whitmarsh argues convincingly that it was highly unlikely that non-Christians spoke of Christians as atheists prior to the age of Constantine. Such a misunderstanding may emerge from a misreading of Martyrdom of Polycarp 9. Instead, it was Christians who were occupied in a project of redefining atheism as the opposite of Christian faith.

The final essay by Judith Lieu, “Modelling the Second Century as the Age of the Laboratory,” functions well as a concluding essay to this section but also to the book as a whole. Lieu looks at ways of explaining the phenomenon of Second Century Christianity. Rather than considering it to be a “parting of the ways” with Judaism, a struggle between proto-orthodoxy and heterodoxy, Lieu advocates for the model of a laboratory. Such a metaphor allows for exploration and experimentation of Christian ideas. She finds that ideas such as biblical theology, pagan mythology, and contemporary philosophy are mixing together within this century which is leading to various outcomes. She sees second century Christianity similar to modern ways that African and Indian cultures are challenging western presuppositions and lead to new and creative ways for truth to be expressed in vastly different environments. Instead of being institutional and fixed, Lieu views Christianity as developing more democratically as a result rather than being a linear progression. By viewing second century Christianity as a laboratory, Lieu promotes thinking about this period more different than the expression of one grand narrative. With this laboratory model, she advocates for a renewed focus on the recovery of particular individuals rather than institutions.

Lieu’s article is an effective conclusion for these articles. She rightly encourages further exploration of different voices within the second century and rightly minimizes the effect of institutions at the time. Her focus on the expression of Christian ideas in different cultures will also help further research. Evangelicals, however, will struggle with her minimizing a grand narrative and downplaying particular truths which can be seen as constant through the second century.

Christianity in the Second Century: Themes and Developments provides top quality scholarly essays in the emerging field of second century Christianity. It is an important reference for scholars working in the field. The nearly forty-page bibliography at the end is a valuable resource for the scholar as well. Some readers may be frustrated with some of the contrary opinions expressed in the book, particularly regarding unity and diversity of Christianity during this time period. These essays, however, do illustrate the diversity present within this field of study which is ripe for further research. Those who are new to the field of second century Christianity will need to have sufficient background from an introductory textbook like Michael Kruger’s Christianity at the Crossroads: How the Second Century Shaped the Future of the Church (London: SPCK, 2017) before reading this book.