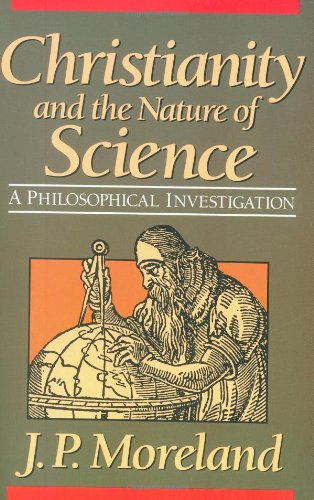 Christianity and the Nature of Science

J.P. Moreland has provided us with a technical and detailed analysis of the nature of presuppositions in science. He first draws attention to the popular misconception of science. He goes on to criticize the concept of ‘the scientific method’ as illusory. Moreland rightly points out the limitation of science, as the philosophical presupposition that lies outside of science is a refutation of scientism. The problems of scientific realism, the belief in the existence of scientific truth, as contrasted with antirealism, the stipulation that science is only a convenient theoretical construct, are also discussed. After enumerating various occasions on which antirealism may actually be preferred, Moreland offers his eclectic solution to the problem. While not willing to abandon scientific realism altogether, Moreland nonetheless advocates adopting ‘realism or antirealism on a case by case basis’ (p. 170). Moreland’s concluding chapter presents the goal of his treatise, to justify creationism as a valid scientific theory.

As a practising molecular biologist who is intensely interested in the integration of science and theology, I commend Moreland’s effort in clarifying the philosophical nature of the creation-evolution debate. However, I cannot agree with the solution suggested by Moreland, the establishment of creationism as an alternative scientific model to evolution, though I concur with him on the philosophical nature of the debate. My reasons are as follows:

(1) The classical dictum, ‘Faith seeking Understanding’, outlines the Christian framework of epistemology. Our understanding of God and his world is predicated on an act of obedience in accepting God as our Creator and Redeemer. Calvin further elaborates on the revelation of God. The knowledge of God the Creator and the knowledge of God the Redeemer are complementary and necessary for people to have a saving knowledge of God. Therefore, theology was the philosophical underpinning of all the intellectual pursuits of the medieval ages, hence the cliché, ‘Theology is the queen of all sciences’. While Moreland’s attack on the cultural myth that ‘science is a rational, truth-seeking discipline and theology is not’ (p. 101) is justified, I do nevertheless find his extrapolation of using scientific methodologies to study theology far-fetched, since science is only one of many ways in the search for truth.

(2) Moreland suggests that Karl Popper’s criterion of demarcation of a good scientific theory, empirical falsifiability (i.e. the parameters and concepts involved must be subject to empirical scrutiny such that their validity can be established or discredited), is not widely accepted in philosophical circles. However, Popper’s definition of scientific methodology was the basis for the late Judge William R. Overton’s decision to reject scientific creationism in the famous creation science trial in Arkansas which was also apparently upheld by the US Supreme Court in the Louisiana case. Empirical scientists depend on the design of controllable experimental conditions in which each variable is tested against a control, with exactly the same treatment except for the parameters being tested. I do believe that Popper’s hypothesis gives empirical science a fruitful scientific methodology.

(3) As an empirical scientist, I view science as a methodology. The goal of science is to establish explanations of natural phenomena strictly in terms of other natural phenomena, chiefly by hypotheses and experimentation. It is in this context that the often misquoted remark of Laplace, ‘I have no need of the God-hypothesis’, should be placed. Moreland, joining the camp of Kuhn and others, enunciates that science is also embedded in philosophical paradigms. Paradigmatic shifts have played important roles in the history and philosophy of science. It is difficult to separate the methodological and the metaphysical elements of science. Moreland also concurs with the distinction between ‘origin science’ (or ‘historical science’) and ‘operational science’ (or ‘empirical science’). ‘Origin science’ is more metaphysical than methodological. Discussion in this area of science is often coloured by one’s outlook on life. I submit that the scientific methodology can be more strictly applied in ‘operation science’ since meaningful consensus can more easily be reached among practising scientists. The success of ‘operation science’ is evidenced by the technological explosion of the modern scientific era.

(4) Even Moreland admits that creationism as a scientific model ‘is less adequate than evolutionary theory regarding fruitfulness in guiding new research’ (p. 242). I would like to add that all ‘origin sciences’ are much less fruitful in guiding new research than ‘operational sciences’. Evolutionary discussion was introduced into the scientific arena by Darwin’s postulation of a mechanism of natural selection, which is an empirically falsifiable concept, despite some claims to the contrary. Popper defended it recently. Natural selection has been well documented as a mechanism that explains the theory of microevolution, but it fails to account for macroevolution or organic evolution. In fact, the evolutionary model of the origin of life on earth is a fruitless scientific model. The late Max Delbruck, Nobel laureate molecular biologist who was also an evolutionist, once remarked, ‘In recent years various theories have outlined the possible connection between molecular selection, natural selection and irreversible thermodynamics within prebiotic biochemical trial processes. While all these theories seem quite plausible and intelligent, in my opinion they tell us very little about the origin of life. I have made it my rule not to read this literature on prebiotic evolution until someone comes up with a recipe that says “do this and do that, and in three months, things will crawl in there”. When someone is able to create life in a shorter time than was originally taken by Nature, I will once more start reading that literature’ (Max Delbruck, ‘Mind from Matter’, Palo Alto, Blackwell, 1986, p. 31; cited by G.T. Javor in Origin, 1987, 14:7–20).

Thus the best solution to the creation evolution controversy, in my opinion, is not the introduction of creationism as a scientific model. Rather, it is to bring to the realization of the secular mind that evolution as a model for explaining the origin of life is a theory that is not empirically falsifiable. Evolution and creationism are both models of ‘Origin Science’ that are by nature more speculative than empirical. However, the evolution model has the testable mechanism of natural selection to explain microevolution, which brings it into the realm of ‘operation science’ at the level of explaining the origins of biological variations. Creationism lacks such testable mechanism and thus is not fruitful in guiding research in ‘operation science’. The recent decision in California to require the teaching of evolution as a scientific theory rather than a fact seems to be in the right direction towards the resolution of this conflict. Moreland’s book, while clarifying the philosophical nature of the conflict, fails to offer a substantive alternative to such a solution.