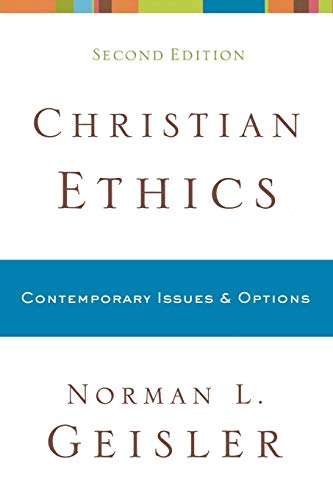 In many ways this is a revision and update of two former books Geisler did on ethics, Options in Contemporary Christian Ethics, and Christian Ethics: Alternatives and Issues. However, Geisler himself states, ‘This book is not a revision of previous works, but the structure, content, and much of the thought are new’. After pointing out the shift occurring in our culture, ‘where the relativity of Einstein is considered absolute, and the absolutes of the Bible are considered relative’, Geisler states his two-fold objective of providing ‘a clear understanding of the issues and a courageous application of God’s Word to them’. Geisler also plainly states that this book is for Christians who recognize the Bible as the sole authority.

Many books are available on the market on the subject of ethics. What makes Geisler’s book unique is its assistance to the newcomer working through his or her personal system of ethics, as well as its service to everyone as a reference work surveying the different ethical systems and issues. The modern world has presented several new ethical issues, such as biomedical ethics and ecology, as well as introduced new twists to the old issues, such as war and euthanasia.

The book is divided into two parts. The first seven chapters deal with the different ethical choices facing the reader. The opening chapter orients him to the subject of ethical choice by briefly discussing contrasting systems of morality. The six major systems of ethics are identified, followed by a short but helpful section on how each of the different theories handles the question, ‘Is it ever right to lie to save a life?’ A separate chapter introducing each of the various theories of ethical choice then follows. The standard relative positions of antinomianism (‘Lying is neither right nor wrong’), situationism (‘Lying is sometimes right’) and generalism (‘Lying is generally wrong’) are included, as well as the different absolute positions of unqualified (‘Lying is always wrong’), conflicting (‘Lying is forgivable’) and graded absolutism (‘Lying is sometimes right if it fulfils the higher law’). He briefly but completely explains each view, then evaluates it, concluded by a short summary. While he admits unqualified absolutism is the view held by most Christians, he does surface important problems which those who hold this view must answer. Geisler also addresses objections to his own view of graded absolutism, in earlier works referred to as hierarchialism, thus making the book an honest evaluation of all six views.

The second and larger section of the book presents different ethical problems in society, namely abortion, euthanasia, biomedical issues, capital punishment, war, civil disobedience, homosexuality, marriage and divorce, and ecology. Geisler presents all the various issues and positions taken on each subject, and evaluates them against the position of graded absolutism. While some may differ with the position of graded absolutism, his arguments and conclusions are helpful for each of the ethical systems. His format follows the general debate pattern of position, rebuttal, counterpoint and conclusion. Far from being merely a conservative defence of evangelical ethics or an exercise in ethical application, the book offers intelligent discussions of all sides of difficult modern ethical questions from a biblically absolute view.

Some notable omissions that would be helpful for future ethical works include materialism, poverty, and racism. Also, for many overseas readers, addressing the issue of polygamy would provide beneficial information.

This excellent book concludes with a glossary of single-sentence definitions, a large bibliography and subject, author and Scripture indexes. Geisler has condensed a graduate level course on ethics into an easy-to-read primer reference work. The discussions are current and complete and take the reader effortlessly through intelligent Christian thought on profoundly difficult questions. Christian Ethics, Options and Issues is a book you will return to often as you face ethical dilemmas in our modern and progressive world.