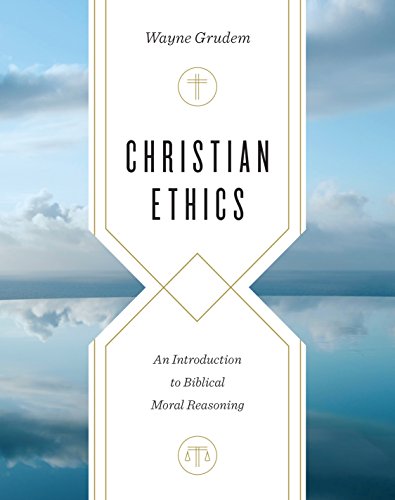 This mammoth (4 lb.!) volume applies the methodology of Grudem’s popular Systematic Theology (Grand Rapids: Zondervan, 1994) to the discipline of Christian ethics. In his own words, the book offers a comprehensive answer to the question, “What does the whole Bible teach us about which acts, attitudes, and personal character traits receive God’s approval, and which do not?” (p. 37). Fans of the author’s Systematic Theology will feel entirely at home with the highly structured treatments, the clear and concise prose, and the continual quoting of Scripture to establish conclusions.

Part 1 introduces the general topic of Christian ethics, explaining why and how Christians ought to study ethics, and establishing some foundational principles: the moral character of God as the “ultimate basis for ethics,” the Bible as the “source of ethical standards,” the glory of God as the “goal of ethics,” and the life-changing consequences of obedience or disobedience toward God. Chapter 6 addresses the question of how to discern God’s will regarding our decisions, including an appendix on Garry Friesen’s influential book, Decision Making and the Will of God (Colorado Springs: Multnomah, 2004). Chapter 7 tackles the issue of “moral dilemmas,” arguing that Christians never have to choose “the lesser sin” (Grudem takes as his main foil the “graded absolutism” of Norman Geisler).

Chapter 8 discusses the important (and among evangelicals, much debated) question of what role the Old Testament should play in Christian ethics. Here is Grudem’s answer summarized: The Mosaic Covenant has been terminated by the death of Christ and therefore none of its laws are binding on Christians, at least not in any direct way. The material from Genesis 1 to Exodus 19, however, “predates the Mosaic covenant and therefore teaches ethical principles for all time” (p. 236). Furthermore, most of the Ten Commandments are reaffirmed in the New Testament and are therefore binding on Christians. The rest of the Old Testament can be understood as “containing God’s wisdom for human conduct” (p. 253). This wisdom can be extracted by applying various principles that take into account the major discontinuities between the Old and New Covenants.

In the remaining 34 chapters, Grudem gives his answers to the prominent ethical questions facing Christians today. On most issues he takes a clear position, expressing confidence that Scripture speaks unambiguously on the question. On other issues, where Scripture does not speak directly to the matter and there’s room for reasonable disagreement among Christians committed to the inspiration and authority of the Bible, Grudem expresses his best judgment, explaining his reasoning, and leaves it there. Often this is couched as the “wisest” position, all things considered, but lacking the force of divine command.

Parts 2 through 7 are structured in light of the Ten Commandments, which Grudem takes (with one exception) to express universal moral laws. Part 2 (“Protecting God’s Honor”) covers the first four commandments along with the ninth. (Grudem’s rationale for this relocation is twofold: the topic of lying is closely related to the topic of purity of speech, discussed in connection with the third commandment, and it is preferable to address the ethics of truth-telling early on because “it raises issues that are relevant for many other topics that follow” [p. 310].) Topics treated in this part include idolatry (in its many forms), use of images (and artistry more broadly), use of language (including discussions of obscenity, vows, and curses), truth-telling, and the Lord’s Day (Grudem contends that Sabbath observance expired with the Mosaic Covenant, but it’s still wise to set aside one day a week for rest and corporate worship).

Reformed readers may be disappointed to find no acknowledgement that the second commandment presupposes a Regulative Principle of Worship, which has weighty ethical implications. The same readers will likely consider Grudem’s arguments against Sabbath observance to be rather superficial; for example, he doesn’t reckon with the force of the argument from creation ordinance (Gen 2:3; Exod 20:11) or take note of the fact that Sabbath observance preceded the giving of the Ten Commandments. (Exodus 16 surely counts as material from Genesis 1 to Exodus 19!)

Part 3 (“Protecting Human Authority”) discusses parental authority, the education of children, equality and leadership in marriage, civil government, and other authorities in human relationships and institutions, all under the rubric of the fifth commandment. Part 4 (“Protecting Human Life”) applies the sixth commandment to various issues: capital punishment, just war, self-defense (including the question of gun ownership), abortion, euthanasia, suicide, aging and death, racial discrimination, physical health, and the use of alcohol and drugs. Part 5 (“Protecting Marriage”) takes the seventh commandment as a launchpad for discussions of marriage and singleness, birth control, infertility treatments, adoption, pornography, divorce and remarriage, homosexuality, and transgenderism. Those who have followed Grudem’s writings over the course of his career can safely predict the positions he defends on all of the above issues. Those who have been critical of his political conservatism in the past may be surprised at how carefully he qualifies and nuances his conclusions at points. Where moral conclusions depend partly on factual questions, such as the operation of birth-control methods, Grudem typically provides ample documentation to back up his claims. Indeed, the extensive footnotes may be one of the most useful features of the book.

Part 6 (“Protecting Property”) addresses a wide range of issues inspired by the eighth commandment: property rights, work and rest, poverty and wealth, financial stewardship, borrowing and lending, business ethics, and environmental stewardship. Readers familiar with Grudem’s previous works on politics and economics will not be surprised at the thoroughness of his treatments. The attention given to these topics undoubtedly distinguishes Christian Ethics from other evangelical ethics textbooks. One might wonder, however, whether devoting over a fifth of the book to such matters is excessive. Still, if much of the suffering in the world is due to poverty and a failure to responsibly develop the resources God has made available to us, these are ethical issues that Christians ought to be encouraged to reflect upon more carefully.

Grudem’s overall approach may be fairly summarized as “applied biblicism.” Christian Ethics, like his earlier Systematic Theology, “seeks to explain ‘what the whole Bible teaches’ about various specific topics” (p. 24). In his own words, the book attempts, “for each ethical topic, to collect and synthesize the teaching of all the relevant Bible passages about that topic and then to apply that teaching wisely to various life situations” (p. 37). Grudem believes that natural law arguments have some value (p. 96), but his conviction is that ethics “should be explicitly based on the teachings of Scripture” (p. 24). This unadorned biblicist approach has both pros and cons. Positively, it reinforces a high (biblical!) view of Scripture and ensures that the arguments are tightly tethered to the Protestant principles of Sola Scriptura and Tota Scriptura. Rather than relying—as some Christian ethicists have done—on a relatively small set of very general biblical teachings, Grudem is committed to mining “the whole counsel of God” for answers.

The downside is that Grudem’s use of Scripture occasionally operates at quite a surface level, without exploring and drawing upon the deeper structures of the biblical canon and the organic relationship between the various biblical covenants. For example, almost no use is made of the notion of creation ordinances, which has been a prominent feature of the Reformed theological tradition to which Grudem is deeply indebted. The nomenclature of “creation ordinances” may be dispensable, but the reality of such creational norms is foundational to biblical ethics.

Since Grudem acknowledges the influence of John Frame on his approach to ethics, readers who have benefited from Frame’s Doctrine of the Christian Life may be interested to hear how the two books compare. On specific questions, Frame and Grudem are largely in agreement. (The most obvious disagreement concerns the ethics of truth-telling; Grudem argues at length, contra Frame, that lying is never morally justifiable.) However, whereas Frame spends considerable time on methodological considerations, surveying major non-Christian approaches to ethics and developing at length a triperspectival biblical model for ethical decision-making, Grudem wastes little time in getting to specific moral issues, which he then treats in great detail. Consequently, Grudem’s book will serve more like a reference work than a user guide. Frame will teach you how to fish and then take you fishing; Grudem will invite you to watch him prepare an extensive seafood buffet.

The amount of autobiographical material in the book may surprise some readers. In many of the chapters Grudem shares how he has wrestled with and applied the principles in his own life, family, and ministry. Indeed, the book is peppered with personal anecdotes. I confess I found this slightly off-putting at first, but by the end of the book I came to see the value of it. It gives the material a warmth and practicality it might otherwise lack. Although this was not his intention, the author’s piety and wisdom frequently shine through the printed words.

One final observation. While reading Christian Ethics it struck me forcefully at times that it is a very American book. Consider some of the topics that receive attention: watching movies and acting in plays; shopping on Sundays; schooling choices; the role of government in protecting liberties; patriotism; self-defense and gun ownership; cosmetic surgery; birth control options and fertility treatments; living wills; transgenderism; vacations and retirement; free-market economics; financial investment; environmentalism and the debate over climate change. I do not mention this as a criticism of the book. On the contrary: these are all live issues in our (Western, American) society, and Christians need to think responsibly about how God’s Word should inform our judgments about them. It’s a virtue of Grudem’s book that he tackles such topics.

At the same time, however, it’s a convicting reminder of how privileged we are in the West and how different many of our priorities are compared with believers in other parts of the world. What a luxury to have to think through the ethics of school choices and fertility treatments! These are truly “first world problems.” It leads me to wonder: What would a Christian Ethics for believers in the Global South look like? And who will write it?