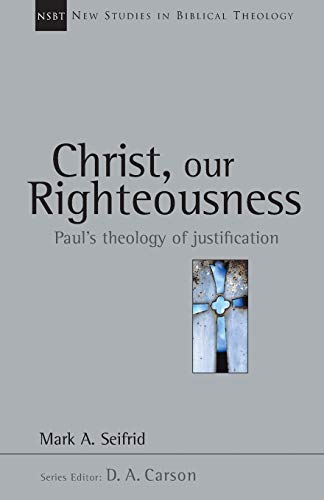 This is a profound, contemporary and faithful contribution to what is one of the hottest topics in NT studies. Mark Seifrid, an Associate Professor in NT at Southern Baptist Theological Seminary in the US has been frequently involved in the debate around justification by faith and the ‘New Perspective’ on Paul, but this is his best contribution yet. Christ Our Righteousness is rich theologically, though not stodgy, and is probably most suitable for final year undergraduates, theological college students, post-graduates and scholars. It presents a coherent view of the Law and justification in Paul’s thought and needs to be grasped as a whole, rather than dipped into.

The first chapter concerns the conversion of Paul, in which Seifrid ably challenges the view put forward by Krister-Stendahl and argued forcefully by James Dunn. The Stendahl-Dunn view argues that Paul’s Damscus Road experience was not a ‘conversion’, but a ‘call’ specifically to abandon his previously held nationalism to preach to the Gentiles. Seifrid brings forward the evidence from the Epistles and Acts that Paul’s pre-Christian life was not a life of pious, if misguided, faith: rather Paul was blind, needing light (2 Cor. 4:1–6), a persecutor of the church (Gal. 1:23–24), ‘out of his mind’ (Acts 26:11), and the ‘chief of sinners’ (1 Tim. 1:16). Chapters 2 and 6 are devoted to exegesis of Romans: first, justification in Romans, and secondly (ch. 6) the place of Israel in God’s purposes in Romans 9–11. Chapters 3 and 7 treat the doctrine of justification in the other Pauline letters (including the disputed Paulines) and the rest of the NT respectively. This latter chapter also contains some useful reflections on the Protestant-Catholic disputes on justification: Seifrid acknowledges that justification has a present and a future aspect, but opposes the Roman Catholic view that it is thereby a ‘process’. Similarly, Seifrid comes down firmly on the side of Luther in affirming the importance of a simul iustus et peccator theology, where the Christian is ‘at the same time righteous, yet a sinner’. Chapters 4 and 5 deal with the themes of the Law in Paul’s thought and faith.

Perhaps the main point that strikes the reader is Seifrid’s ‘big’ view of justification and the righteousness of God. It is by no means merely the way one ‘becomes a Christian’ (although it does encompass that). Rather, it encompasses the whole relationship between God and humanity (183). It concerns what Seifrid calls ‘God’s contention with humanity’, whereby God establishes his claim that all are liars and thereby justifies himself as he justifies the ungodly. This is a very interesting point which could have done with more explanation. Paul’s doctrine also extends beyond the human sphere, to God’s establishment of his order and dominion over the whole of his creation, the cosmos: ‘ “Righteousness” … signifies a state of affairs which holds sway in the world’ (74). As such, justification is a ‘bigger’ concept for Paul than salvation and reconciliation. In contrast to salvation, ‘justification for Paul comprehends the new creation and resurrection from the dead’ (92) and reconciliation ‘describes the present reality of a right relationship with God, but does not carry the overtones of eschatological redemption that “justification” does. Nor does it convey the understanding that God himself has been justified in the justification of the believer’ (70). The justifying work of God takes place on the cosmic stage in the death and resurrection of Christ; within the individual, it consists in faith in Christ (147).

This is a vital contribution to the debate on the nature of Paul’s doctrine of justification. Seifrid has avoided the old caricatures of Judaism that have often been a feature of traditional portrayals between the Apostle and his contemporaries. He misses the opportunity in some areas to address the key issues addressed by the ‘New Perspective’, such as the contention that the doctrine of justification apart from works emerged at Antioch. But Seifrid has moved the debate forward in taking seriously Paul’s theology of final judgement according to works (though again, this could have done with more explanation) and thus showing the harmony between Paul and James. (Other important contributions here can be found in D.J. Moo’s Pillar Series Commentary on James and T.R. Schreiner’s Baker Exegetical Commentary on Romans). This book is undoubtedly worth reading by anyone whose mind is not yet completely closed on Paul’s view of justification!