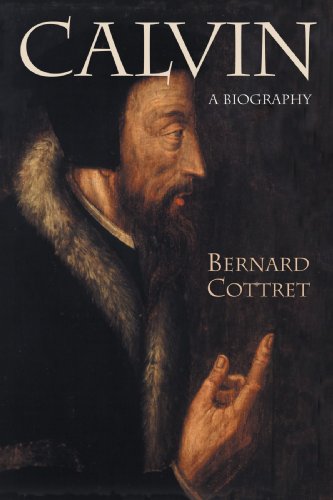 Between 1988 and 1990 three major biographies of Calvin appeared in English. Ronald Wallace’s Calvin, Geneva and the Reformation gives an account of Calvin’s life within a largely topical framework. Alister McGrath’s A Life of John Calvin gives an account of his life, followed by his ideas and influence. Very different is William Bouwsma’s John Calvin. This was undoubtedly the most controversial book on Calvin of the last twenty years, provoking much response and receiving reviews in a range of secular newspapers. Bouwsma’s aim was to set Calvin firmly in his sixteenth-century context, which he did by speculatively postulating a fundamental tension between two Calvins—the scholastic rationalist and the humanist rhetorician. His introduction was significantly sub-titled ‘The Quest for the Historical Calvin’ and he saw his task as rescuing Calvin from the distortions of confessional studies.

How does Cottret’s biography relate to these earlier biographies? Cottret is a university historian whose Calvin is definitely portrayed as a sixteenth-century individual rather than a confessional icon (‘without the glossy embellishments of forced sanctity or false devotion’). In this he has the same aims as Bouwsma, but he works towards them in an altogether less speculative and controversial manner. While Cottret’s book will not arouse the excitement and passion of Bouwsma’s, as a portrait of Calvin it is far more reliable. Calvin was ‘neither a saint nor a dictator, neither a Savonarola nor a Lenin. On the whole he belonged to the prophetic tradition’ (266).

Cottret’s Calvin is one whose ideas evolved over time, though recognition of this fact is not quite as lacking in previous biographies as the dust jacket suggests. Thus the author emphasises the influence upon Calvin of his time in Strasbourg, commenting that it was there that Calvin became a Calvinist (108). Although Cottret is more historian than theologian there are helpful discussions of Calvin’s theology—but is it really accurate to say that ‘for Calvin there is a real presence, albeit spiritual, of Christ in the elements’ (84, my emphasis)? There is a discussion of the perennially controversial topic of predestination where it is suggested that in his later years Calvin was ‘carried away by polemics and his authorial vanity’ and thus came to over-emphasise the doctrine. It is suggested that he was therefore partially responsible himself for the later identification of Calvinism with predestination (321–24).

One point, often overlooked today, the author brings out well: with reference to the French reformation he notes that it was not Romans and the doctrine of justification that polarised France but Hebrews and the mass. Given that an agreement on justification was forged at Regensburg in 1541. This is an important point. During Mary Tudor’s reign in England Reginald Pole, whose doctrine of justification was closer to the Reformers than to Trent, supervised the burning of bishops for their views on the eucharist.

How good is the translation? Generally the book is readable but there are places where the style becomes contorted or obscure, which may reflect problems with the original. To give an example: ‘A Christian combined with a hedonist was in itself a complete feminine ideal. In hindsight these tensions between conservatives and reformers appear limited the scope’ (73). But at other times the author’s lively style shines through. My favourites are: ‘The heresies that encumber the history of Christianity are like beetles; one can only marvel at their colours and their variety’ (125). Beza was a man of certainty rather than a specialist in nuances’ (209).

The references to Calvin’s own writings are frustrating to anyone wishing to trace a quotation. The majority are cited either from a secondary source (without mention of the source in Calvin) or merely by volume and column of the Calvini Opera, without indicating which work is involved.

This new biography is a welcome addition to the gallery of portraits of Calvin. It has its own valuable contribution to make and is an original account of the Reformer’s life, but it does not supersede or displace earlier biographies with their own distinctive strengths and weaknesses.