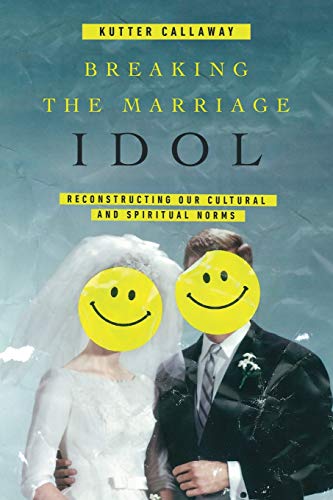 Breaking the Marriage Idol: Reconstructing our Cultural and Spiritual Norms

Iconoclast: a person who attacks cherished beliefs or institutions. Kutter Callaway, professor of theology at Fuller Seminary, fits the definition of an iconoclast. Why? Because he has no qualms about aiming blows at one of the oldest and most established institutions found among human civilizations, marriage.

Now to be clear, Callaway is not against marriage; he is happily married. Nor is he saying that marriage does not benefit society and that people ought not to pursue marriage. In fact, he believes that those who are called to marriage ought to pursue marriage. Rather, the purpose of Breaking the Marriage Idol is to challenge Christians to rethink the normalcy of marriage for the Christian community.

Callaway is concerned that too many in evangelical circles have become hyper focused on the normalcy of marriage. His argument is that most churches have an unspoken conviction that every Christian falls into one of two categories: “married” or “not-yet-married.” This leaves people who do not neatly fit into these categories, particularly singles and celibate gay Christians, as outsiders to church culture.

Callaway spends the first few chapters analyzing the “state of the union” of evangelical churches in regard to this problem of “marriage normalcy.” Interestingly, he argues that rather than taking their cues from Scripture’s teaching on sexuality and marriage, many churches have adopted the “marriage normalcy” view and, by association, definitions of marriage and manhood and womanhood that are not drawn from Scripture but from the culture. Showing his skills as a cultural commentator, he notices an intriguing pattern: that a culture of Disney princesses, serial sexual monogamous relationships leading to relational skepticism (as paraded in the lyrics of Taylor Swift), and the “multiple intimate relationship for seeking true love” paradigm (broadcasted on The Bachelor and The Bachelorette) has leaked into the church and informed its practices of “true love waits” seminars, “kissing dating goodbye” and “women captivating men who are wild at heart.”

Callaway believes that the church has adopted a view of romantic relationships which sees sexual intimacy within marriage as the pinnacle of a fulfilled life. Much Christian literature funneled towards teens contains a baptized version of a Disney fairytale as it promises your “true soulmate” who will complete you and uses sex to sell abstinence: “if you are abstinent now, you will have amazing sex when you are married” (p. 66). Those who are putting off dating relationships as teenagers are still assuming that marriage is in their future. In his own words, “we simply cannot escape the fact that when cast in terms of the princess paradigm, singleness is a state of radical incompletion, romantic love is a self-justifying good, and marriage is an end in itself” (p. 72).

Callaway then presents an alternative proposal: a radical reformation of church culture in which both singleness and marriage are valued as equally legitimate options for Christians. He argues from Scriptures such as Genesis 1–2 and 1 Corinthians 7 that marriage is never put forward as the normative state for men and women but serves as an assumed cultural practice.

This then enables Callaway and contributor Joshua Beckett (who is the author of chapter 6, “Desire in Singleness”) to advocate for an increasingly popular view known as “spiritual friendship.” Building on the work of Wesley Hill (e.g., Spiritual Friendship: Finding Love in the Church as a Celibate Gay Christian [Grand Rapids: Brazos, 2015]), this view not only allows for gay Christians to accept their orientation but also to commit to lifestyles of celibacy lived out within the context of the church. This can lead to gay celibate communities or even covenanted celibate partnerships between gay Christians and blessed by the church. This fits into Callaway’s proposal because the “spiritual friendship” ethos he calls churches to adopt sees both singles and married couples deepening their understanding of community through intentional relationships based on a redefinition of human sexuality. Sexuality is greater than physical expression but encompasses all the ways men and women dwell in relation to one another. “We would do well to reclaim a view of human sexuality that understands something as seemingly mundane as drinking coffee with a friend as a profoundly sexual act” (p. 113).

There are many portions of this book where I would question the author’s reasoning and conclusions. For example, he challenges the normalcy of marriage by arguing that Genesis never says that Adam and Eve were married because it uses the Hebrew words אִישׁ (man) and אִשָּׁה (woman), rather than more explicit terms for ‘husband’ and ‘wife’ (pp. 114–15). Yet Genesis consistently uses אִישׁ and אִשָּׁה for husband and wife throughout its chapters (Gen 12:18, 16:3; 20:7, 26:8–9; 29:32; 30:15). Callaway’s exegetical minimalism can also come back to bite him, for he argues that Genesis 1–3 is not talking about marriage but about human beings being created for relationships within a community. But the same text which (supposedly) does not address marriage also lacks a larger community, since there was only one man and one woman in the garden.

While I would agree that there needs to be reform in how church culture can sometimes exclude those who are unmarried, I cannot follow all of Callaway’s conclusions concerning marriage and singleness. Marriage and covenanted partnerships in Scripture are exclusive to monogamous, opposite-sex relationships, and there is a unique and different calling that God has given to those who are married and to those who remain single. Marriage is intrinsic to the covenant which God made with humanity, where marriage and childrearing are tied to humanity’s goal of fulfilling the cultural mandate within the order of the first creation. It is true that the new covenant begins a transition from physical ties to spiritual ties for those who are part of the kingdom of God, whereby the eunuch can become the spiritual father of a nation (see Isa 56:4–5; Acts 8:26–38). Nevertheless, one worries that Callaway is compressing the already and not-yet elements of the kingdom of God in order to fit his egalitarian paradigm. While there will be no marriage in the eschaton (Matt 22:30), the cultural mandate which entails marriage and procreation as a means of spreading God’s glory throughout the earth remains until Christ returns.

Callaway’s work is representative of a larger movement within evangelicalism which is trying to redefine marriage, relationships, and sexuality. This movement is gaining momentum and voicing its dissidence against others within the evangelical tradition. Breaking the Marriage Idol is particularly noteworthy because it seeks to provide a cohesive exegetical argument for the “spiritual friendship” proposal which is presenting a compelling option to Christians who find themselves experiencing same-sex attraction or who, for other reasons, believe themselves to be called to a life of celibate singleness.

This is a conversation which is only beginning in an age where gender norms and expectations are consistently being reevaluated and questioned. What is at stake is not only the nature and purpose of marriage and sexuality but how we represent and respond to the gospel message. For the gospel is directly tied to how we live as faithful Christians and how we represent the mystery of Christ’s love for his bride, the Church, in our marriages and friendships.