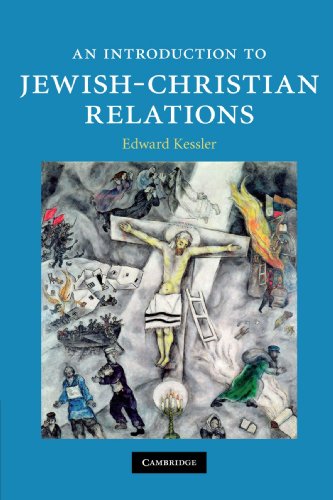 An Introduction to Jewish-Christian Relations

The book has a timeline of Jewish-Christian relations beginning with the NT and concluding with Major Institutional Statements since 1945 Relevant to Mission, Covenant, and Dialogue (pp. vii–xvi). The first introductory chapter unfolds the significance of the author’s current research (pp. 1–24). The complex, multifaceted history of Jews and Christians throughout the ages has set the stage for mutual exclusion, suspicion, persecution, and violence until the present day. At the same time, following the horrors of the Holocaust and the historical momentum of the establishment of the State of Israel, a remarkably positive change has occurred: many Christian denominations have willingly agreed to embark on the path of interfaith dialogue with Jews.

Another significant development had also occurred on the academic level. Contemporary Christian scholars and theologians have begun to acknowledge and seriously engage with studying the Jewish origins of Christianity, thus encouraging Christian and Jewish scholars to work cooperatively. For example, Christians have started to study the NT as Jewish literature per se. Kessler cites the World Lutheran Federation (1998): “Christian also need to learn of the rich and varied history of Judaism since New Testament times, and of the Jewish people as a diverse, living community of faith today. Such an encounter with living and faithful Judaism can be profoundly enriching for Christian self-understanding” (on pp. 1–2). An important development that has taken place on the Jewish side is the publication of the document titled “Dabru Emet” (2000). It paves the way for Jews to reconsider afresh their historical reception of Christianity. Following a sketchy description of the theological issues involved in Jewish-Christians relations and a brief summary of the history of Jewish-Christian relations, the introduction goes on to discuss the modern attempts to study Jewish-Christian relations. Kessler then illustrates his scholarly approach to the topic by highlighting liturgy, art, and Jewish-Christian relations in the United Kingdom.

Chapter 2 (pp. 25–44), “The New Testament,” is a good starting point to discover the complex history of relations between Jewish groups in the Roman occupied territory of Israel and the Jews of the Diaspora and the co-emerging movement of observant Jews for Jesus in the first century a.d. The reader will be fascinated to read about the Jewish nature of the NT writings. In particular, the discussion on Paul as a Jew is captivating. Concluding the second chapter with a study on Pauline theology, Kessler writes,

Indeed, so strongly does Paul make this point that he offers a severe warning that Gentile Christians should not be haughty or boastful toward unbelieving Jews, much less cultivate evil intent and engage in persecution against them. This remainded a critical warning almost totally forgotten by Christians in history. As we shall see in the next chapter, shortly after the New Testament canon was closed Christian writers remembered Jews as ‘enemies’ but not as ‘beloved’ of God (Rom 11:28), and have taken to heart Paul’s criticisms, using them against Jews, while forgetting Paul’s love for the Jewish people and their traditions. (p. 44)

Chapter 3 (pp. 45–64), “The Writings of the Church Fathers,” raises concerns with respect to the increase of anti-Jewish sentiments in Patristic Literature. Chapter 4 (pp. 65–80), “The Writings of the Rabbis,” covers the topic of rabbinic approach toward Christians, and most importantly, Jesus of Nazareth, as the key figure of Christianity. Chapter 5 (pp. 81–101), “Biblical Interpretation: Another Side to the Story,” offers an interesting discussion of hermeneutical interchange between Jews and Christians in the Patristic era. Genesis 22 is a fine example of an exegetical encounter between Jewish and Christian thinkers manifested in theological treatises and arts alike. Chapter 6 (pp. 102–23), “Medieval Relations,” focuses on a quite dark period in Jewish-Christian relations, though there were some positive developments such as Christian Hebraism and the positive attitude of some Christian rulers toward the Jews in medieval Europe.

Chapter 7 (pp. 124–46), “Antisemitism and the Holocaust,” outlines the roots of modern antisemitism, the Holocaust, and the Christian responses to this Jewish tragedy. Chapter 8 (pp. 147–69), “Zionism and the State of Israel,” expounds on the hotly debated political topic of Palestine and Arabs, on the one hand, and Jews and their historical (biblical) claim for the land of Israel, on the other. Chapter 9 (pp. 170–90), “Covenant, Mission and Dialogue,” touches on three core theological points: covenant, mission, and dialogue. According to Kessler, these central topics are critical to ensure future progress in the dialogue between Jews and Christian. The key issue here is the doctrine of supersessionism or the theology of replacement so commonly addressed in contemporary biblical studies and systematic theology.

Interestingly, the author touches, by passing, on the mission of Jews for Jesus, a rather controversial missionary group of Messianic Jews (p. 184). On a larger scale, it would have been necessary to elaborate on the role Messianic Judaism plays in the contemporary dialogue between Jews and Christian. Or put another way, what constructive role do they play in the process of reconciliation between Jews and Christians? Chapter 10 (pp. 191–211), “Jewish-Christian Relations and the Wider Interfaith Context,” discusses Muslims and their part in Jewish-Christian relations. It also sheds light on the importance of exegetical pluralism, namely, a careful and respectful rereading of the biblical text in the context of a rich hermeneutical legacy preserved by Jews and Christians alike.

The book concludes with a bibliography, glossary, and general index. The book has no footnotes or endnotes. It makes this book accessible and easy to read. An Introduction to Jewish-Christian Relations is by all means an interdisciplinary study that invites the reader to the world of Jewish-Christian relations. I would highly recommend this book to those readers interested in learning more about Jews-Christian relations. Indeed, the book promises to be a very useful resource in teaching and research alike.