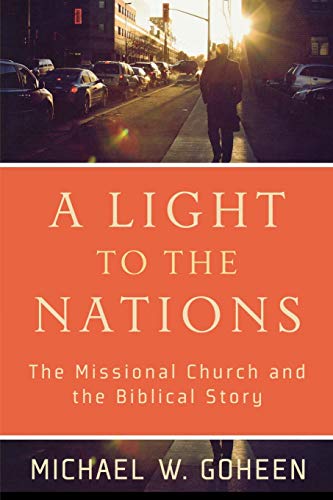 A Light to the Nations: The Missional Church and the Biblical Story

When evangelical authors publish books on the church, more often than not they focus on strategies or principles of church growth and on various “practical” topics such as worship, church order, leadership, and budgeting. As regards books on missions, there is usually a similar focus on strategy and methods and questions of contextualization. Studies on biblical and theological foundations are rare. Michael Goheen, who teaches at Trinity Western University and at Regent College in Vancouver, has written just such a book: as he analyzes the nature of the church, he describes the task of missions. While acknowledging that in the last twenty years or so numerous books have appeared on missional ecclesiology, Goheen insists that few have provided a sustained discussion of biblical-theological and exegetical matters, particularly as regards the OT. Goheen wants to fill this gap, writing for theological students as well as pastors and leaders in the church, seeking to provide not “quick-fix strategies” but “scriptural and narrative theological work struggling with our biblical identity and role in the original historical context” (p. ix).

Chapter 1 on “the church’s identity and role” clarifies the term “missional”: it “reminds the church that it is to be oriented to the world and to remain true to its identity as an agent of God’s mission and a participant in God’s story” (p. 5). Goheen then briefly surveys the history of the Western church that started with the self-awareness of Christians being “resident aliens” in terms of a fading of the missional identity of the established church, which became captive to contemporary, post-Enlightenment culture. After noting problematic images of the church that shape our understanding of the church (e.g., the church as community center, as theater, as classroom, as social advocacy-group), he describes the “starting points” or landmarks that help Christians understand the church, the first being the biblical story in which Jesus Christ is central as the true story of the world.

Chapter 2 describes the missional role of Israel as seen in the patriarchal promises and in the events of the exodus. Chapter 3 illustrates Israel’s missional calling in terms of tribal confederation, priestly kingdom (monarchy), and a scattered people among the nations (exile and diaspora).

The next five chapters are devoted to the NT. Chapter 4 interprets Jesus’ proclamation of the kingdom of God in terms of the gathering and restoration of Israel. Chapter 5 describes Jesus’ death and resurrection as bringing the reign of evil and the power of sin to an end, as making the power of the “age to come” a reality, and as establishing the missional nature of the community of Jesus’ followers. Chapter 6 traces major aspects of “the missional church in the NT story,” i.e., in the Book of Acts. Chapter 7 mines the NT epistles for “images of the missional church,” such as people of God, new creation, body of Christ, temple of the Holy Spirit, and diaspora.

Chapter 8 summarizes Goheen’s findings in terms of participating in God’s mission, continuing the communal mission of Israel, the mission of Jesus, and the witness of the early church. Chapter 9 (“What might this look like today?”), rather than pointing to specific churches or congregations that exemplify Goheen’s vision of a missional church, presents his list of thirteen things that he has attempted to implement in his local church first in Hamilton, Ontario, then in Burnaby, British Columbia. Goheen emphasizes that these are not “new insights for reinventing church structures,” nor “easy and surefire steps to a growing church,” nor “miraculous fixes that can cut through complexity, difficulty, time, and hard work” (p. 202). These thirteen perspectives begin with “a church with worship that nurtures our missional identity” and “a church empowered by the preaching of the gospel,” and they end with “a church with small groups that nurture for mission in the world” and “a church that seeks and expresses the unity of the body of Christ.”

Strong convictions sometimes prompt their proponents to construe false alternatives, exaggerating the problems believed to be inherent in other positions. It is not necessary to argue that an understanding of “mission” in terms of (geographical) expansion is “obsolete” (p. 4): as long as there are neighborhoods, villages, towns, and regions without churches, “mission” by necessity involves “expansion.” While “missional” should indeed describe “the very essence and identity of the church,” there is no need to say that the term “at its best” should not describe “a specific activity of the church” (p. 5); in the last chapter of the book, Goheen himself describes a host of activities that leaders in missional churches should engage in. While “community” is without doubt an important category in a discussion of God’s purposes, it must not be allowed to control the interpretation of all “missional” passages: in the commission texts (Matt 28:16–20; Luke 24:44–49; Acts 1:8), Jesus did not send a “community” into the world (p. 114) but indeed individuals whom Luke 6:14–16 mentions by name as those whom Jesus called and chose to carry on his mission. When Jesus sends the twelve disciples, “twelve” is not merely a symbolic number (p. 98) but to be taken literally: he sends them two-by-two. And the outward movement described by Luke in Acts, while certainly “ecclesiological” (p. 131), is without doubt also individual: it is Peter who preaches the gospel, then Stephen and Philip, then Barnabas and Paul. While Goheen allows that the sending out of individual Christians as evangelists or missionaries is “legitimate,” it is both unnecessary and unwarranted to assert that “the story told in Acts is different: it is an account of how ecclesial communities that corporately embody the gospel (like the one in Jerusalem) are spread throughout the world,” or that “the centrifugal movement of the book of Acts concerns communities sent out by their Lord” (p. 131). The commission of Acts 1:8 is linked with the specific names of Jesus’ disciples (Acts 1:13): at least in this text, it is not a community that is sent, but individuals. The “feet” of those who are sent (Rom 10:15) are not the feet of communities, but of individuals. When Paul speaks of the origins of his missionary work, he speaks of God calling and sending him (Rom 1:1; 1 Cor 1:1; Gal 1:1). Describing the missional nature of the church must not lead the interpreter to minimize, downplay, or negate the significance of individual evangelists and missionaries. Without the latter, the gospel will not be preached.

This is an important book in what it affirms concerning the missional nature of God’s purposes and hence of God’s people. Too many churches are so self-absorbed in ministries and programs that they lose sight of the larger calling of the church to participate in God’s mission to “restore all creation and the entirely of human life from the ravages of sin” (p. 191). Readers will learn much about the biblical story of God’s purposes in general and about numerous passages that describe God’s mission in particular.