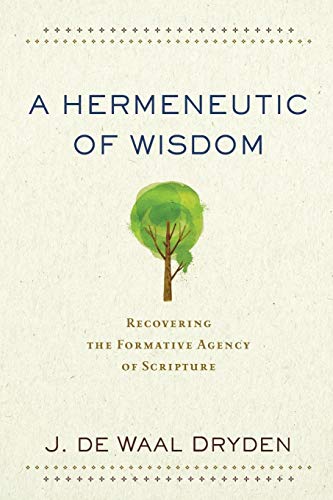 A Hermeneutic of Wisdom: Recovering the Formative Agency of Scripture

“The central thesis of this book,” writes J. de Waal Dryden, “is at once commonsensical and controversial: the Bible is a wisdom text” (p. xvi). He believes we should take seriously the intentionality of the text, which he says is both discoverable and clear: the Bible was written to shape the people of God, “to cultivate certain devotions, beliefs, desires, and actions—to prize some things and despise others” (p. xiv). Nevertheless, while this was “the majority opinion of the church throughout its history and was uncontroversial in all ages prior to the modern era,” what dominates biblical studies today are critical methodologies that “usually deconstruct this wisdom intentionality” (p. xv)—or, it seems, are simply incapable of seeing it due to various presuppositions.

Dryden, however, wants to reinstate reading the Bible in a certain way which he believes will not only recover the meaning that the text was written to convey, but is theologically responsible as a way of approaching God’s word. He presents a method of reading, with examples of how this method changes the way we might read various New Testament texts, that would show believers how to use Scripture as it is meant to be used—as a formative text for character and community.

For this reason, Dryden (more or less) unapologetically claims that areas generally regarded as part of moral psychology, practical theology and spiritual formation should rightly be included in New Testament studies. He is quite aware that this would be regarded as “unsanctioned infiltrations,” but “their exclusion is a historically conditioned employment of certain beliefs foundational to modernist understandings of anthropology and epistemology, for which I can salvage only a mild allegiance” (pp. xxii–xxiii). One is tempted to applaud. Modern disciplinary boundaries may be useful for organizing payrolls, but they are hardly arbiters of reality, after all.

As a lecturer in ethics, I also like the fact that Dryden similarly rejects a typically modernist understanding of ethics, “moral casuistry within an idealist deontological (Kantian) framework” (p. xxi). If Scripture is written with a formational purpose, then ethics rightly understood becomes not just the study of moral responsibilities, but moral formation—the task of becoming a moral person or (if we might put it more biblically) a godly person. Moral agency and moral formation, he contends, “only make sense in the context of how that agency is directed toward God as the giver of all things and whose glory is the proper telos of all human loves and actions” (p. xxiii). In this way, he rejects the distinction between “moral formation” and “spiritual formation,” where they are seen as two different things “because one deals with external moral action and the other deals with internal spiritual experiences” (p. xxiii, n. 17). I am no fan of the phrase “spiritual formation,” and the attempt to distinguish it from moral formation, which is ubiquitous in the literature on spiritual formation, is one of the reasons I don’t like it. Dryden, however, although he keeps the phrase, rightly uses a far more biblical concept to inhabit it.

The book has two distinct sections. Dryden begins with what he calls “tilling the soil”—looking at questions of epistemology and the foundational philosophical assumptions that drive how we read texts. It is all too easy to assume that hermeneutics, how we read, is independent of what we believe about how we know and who we are. These brief chapters contain extremely useful overviews of our philosophical heritage in the Western world, which lie behind both modernist thinking and the reactions to it in postmodernist philosophy. Dryden shows how these two recent moods have different ideas of how a reader relates to a text—distinctly from it, as the dispassionate objective observer, or as active in the creation of meaning, inevitably situated and partial. Yet both still see the text as the material to be put in the hands of the reader who masters it in one way or the other. Both fail to realize that Scripture, God’s word, is rightly approached in humility and trust.

There is much here that I value, and indeed it reminds me strongly of what the late Mike Ovey built into his master’s module on Epistemology and Hermeneutics, which became compulsory for all postgraduate students at Oak Hill Theological College (Mike died shortly after teaching its first iteration). One of the strongest recommendations I could give this book is that Mike would have really appreciated it—although he would probably have added that the first section could have done with some Martin Buber and his I-thou/I-it distinction.

Dryden’s thesis is that all Scripture is what he broadly terms wisdom, that it not only has practical applications, but was written for the purpose of teaching the very practical skill of living wisely. He has captured in a real and worked through sense the truth that theology is never abstract; it is never purely theoretical. God tells us things for a reason, and that reason is not just that we might know more, but that we should become different people, his people. This approach overcomes what Dryden sees as a number of false dichotomies built into many contemporary ways of approaching the Bible. One is the dichotomy between theology and application. In Christian thought, there is no is/ought divide, no naturalistic fallacy. What God is—his compassionate, loving, merciful, just character—flows through creation and all he has done in it. His being moulds both who we are and who will become and therefore what is right in our thinking and acting. Wisdom, Dryden says, “operates at the intersection of being and doing”—and so makes sense of how the Bible moves between things that we place in separate categories.

Dryden works his thesis through in his second part, “Planting the Seeds.” Here he has chapters on Gospels and Epistles, with several case-studies from different books in each genre. He gives enough detail to demonstrate that the “wisdom hermeneutic” does overcome various particular exegetical difficulties that have troubled scholars. At the same time, he also suggests fruitful ways forward for taking this approach further.

Dryden’s approach is not only useful for biblical studies but also as a way into Christian ethics. Indeed, it could potentially speak into the discussion about what we are doing in theological education as well; we need neither Athens nor Berlin, but a holistic approach to wisdom.

This is an introductory book in many ways, not a comprehensive analysis of hermeneutical approaches (even his own), nor is it a commentary on the Bible texts considered. (Indeed, as Dryden points out, he has not tried to tackle Old Testament texts through this lens at all.) More work needs to be done, therefore, to see how Dryden’s approach bears fruit in other texts, or further in the texts he considers. However, at this stage his approach is very attractive in the way it brings cohesion and wholeness to Scripture understood as God’s saving word.