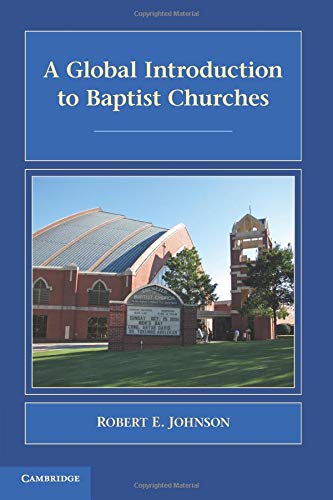 A Global Introduction to Baptist Churches

The year 2009 marked the four hundredth anniversary of the birth of the Baptist movement. Among the numerous studies that were written in connection with that anniversary, none are more ambitious than Robert Johnson’s A Global Introduction to Baptist Churches. Johnson’s work is important because he bucks the scholarly trend among Baptist historians. As he correctly notes, “Most often when the Baptist story is told and contextual exploration is undertaken, the contours are confined to the Anglo Baptist cultural experiences” (p. 1). This typically means non-Anglo Baptists are either treated in a token fashion in a chapter or two or are hardly discussed at all beyond recounting American and British Baptist missions-advances. For his part, Johnson attempts to treat various Baptist groups on their own terms, without assuming that the experiences of English-speaking Baptists are normative. This approach is very much in keeping with current trends among historians of Christianity, notably Philip Jenkins, Adrian Hastings, Bruce Mullin, and Mark Noll. A Global Introduction to Baptist Churches is the first book to take a “world Christianity” approach to Baptist history, though it will almost certainly not be the last.

Johnson’s book is divided into nine chapters spread over five sections. The first section, comprised of one chapter, tells the story of Baptist beginnings in the seventeenth century. This is the only section of the book that more or less follows scholarly convention among Baptist historians. The second section, also limited to one chapter, covers what Johnson calls the age of emerging Baptist denominational traditions. This section highlights the growing diversity among British and North American Baptists, which Johnson interprets as foreshadowing the even greater variety within Baptist Christianity after it spreads to non-Anglo nations. The third section, which includes three chapters, focuses on what Johnson considers the “frontier age” of Baptist advancement from the English-speaking world to Continental Europe, Africa, Asia, and Latin America in the century following the formation of the Baptist Missionary Society in 1792. The fourth section, which also includes three chapters, is devoted to the proliferation of “traditioning sources” among various Baptist groups all over the globe. This focus on multiple Baptist traditions, each influenced by various biblical and cultural sources, constitutes a dominant theme in Johnson’s book. The final section is comprised of a chapter devoted to Baptist beliefs and a brief conclusion discussing the future of Baptist identity.

A Global Introduction to Baptist Churches is an honest attempt to take Baptist history where it needs to go—global. Unfortunately, the results are mixed. On the positive side, Johnson presents an excellent basic introduction to Baptist movements in regions all over the world. His work provides an accessible narrative to complement Albert Wardin’s Baptists around the World: A Comprehensive Handbook (B&H, 1995). Professors will likely find Johnson’s book to be an excellent resource to use in crafting lecture notes, while doctoral students will discover a wealth of possible dissertation topics, including many outside the English-speaking Baptist world. The timeline includes major global events since the seventeenth century, which helps to provide historical context for Baptists movements on every continent. Johnson’s emphasis on Baptists’ polygenetic origins reflects the best recent scholarship on an oft-debated topic.

Despite its usefulness, A Global Introduction to Baptist Churches suffers from significant shortcomings. Johnson is strongly influenced by postmodern philosophy and theology (pp. 3–4), which colors his interpretation of Baptist history. While any honest historian will concede that Baptists are very diverse, Johnson seems to view Baptist diversity as a virtue in and of itself. Perhaps for this reason, like many other moderate and liberal Baptist historians, Johnson overemphasizes “freedom” as a central theme in Baptist history. He downplays the “Anglo” emphasis on doctrinal precision while speaking glowingly of Native American or African attempts to synthesize Baptist Christianity with traditional animistic beliefs. While he helpfully emphasizes the role women have played in Baptist history, he consistently adopts feminist views of gender roles and at times seems strained in his attempts to find a woman or two to work into the narrative.

Much of this is common fare among progressive Baptist historians. While it is certainly true that Baptists have historically advocated liberty of conscience and local church autonomy, these beliefs were never viewed as ends unto themselves. For most Baptists prior to the twentieth century, freedom was closely tied to biblicism: Baptists wanted to be free to follow what they believed the Scriptures commanded, particularly in matters ecclesiological. They wanted the freedom to immerse professing believers, the freedom to form local churches comprised only of professing believers, the freedom to govern themselves congregationally rather than submit to any ecclesiastical hierarchy, etc. For the earliest Baptists, freedom was a means unto a greater end: biblical fidelity and gospel faithfulness. Like many of his moderate and liberal colleagues, Johnson consistently misses the forest of faithfulness for the tree of liberty. And while his postmodern sensibilities have helped him see the importance of emphasizing the uniqueness of contextual Baptist sub-traditions—a needed corrective among Baptist historians—it has also caused him to steer clear of any sort of prescriptive statements about Baptist identity. Indeed, the only time he thinks it appropriate to judge a Baptist sub-tradition harshly is when that group questions the practices (and thus violates the freedom) of another Baptist group (p. 5).

Johnson’s interpretations are also inconsistent at points. For example, Johnson argues Baptists are polycentric, lacking any unified center (p. 3). Yet he also contends Baptists do have a central theme: they dream of a better life, however such life is defined in their particular contexts (p. 9). (It is not at all clear how the dream of a better life is uniquely Baptist.) This confusion carries over into Johnson’s discussion of Baptist identity. On the one hand, he thinks it futile to attempt to articulate any sort of central Baptist identity (pp. 5, 11). On the other hand, his final chapter is in fact a brief exposition of Baptist beliefs and practices. Though Johnson is quick to claim there is a diversity within each of these practices (p. 387)—which none would dispute—it seems that certain commonalities that transcend different Baptist groups point to at least some sort of central Baptist identity.

A Global Introduction to Baptist Churchesis a flawed book on many levels, yet it remains perhaps the most important Baptist history text written in the past generation. Though his interpretations are at times questionable, Johnson’s goal is commendable. All future Baptist histories that make any pretense toward being comprehensive must adopt a global perspective and listen to non-Anglo Baptist voices on their own terms. Scholars of Baptist Studies owe Johnson a debt of gratitude for providing a starting-point for future conversations about Baptist history and identity in an age where the West is no longer the geographic center of the Christian universe.