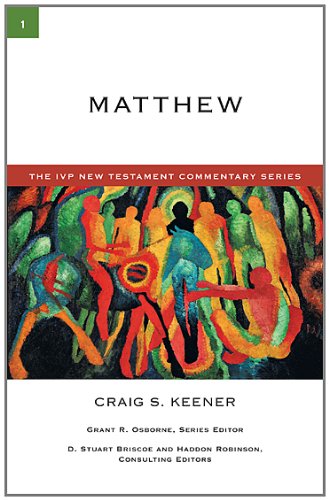 A Commentary on the Gospel of Matthew

It is not easy to get a commentary published that is not part of an established series. Such a commentary must earn its way more than others by being of special merit. Keener’s commentary eminently qualifies and further enriches the considerable resources now available to the student of Matthew’s Gospel. Keener is also the author of a more popular commentary on Matthew in the IVP Commentary Series (1997), as well as The IVP Bible Background Commentary (1993).

While the commentary proper is 649 pages long, it is followed by a bibliography of no less than 150 pages and indexes comprising a further 167 pages! The index of ‘ancient sources’ is itself 140 pages long, with about 50 pages devoted to OT, Apocrypha and NT and no less than a further 90 pages (with triple columns) devoted to other ancient literature! The bibliography and indexes thus combine to form nearly one third of the book! This is indicative of the thick richness of the scholarly apparatus that supports the commentary, which abounds in highly detailed footnotes and numerous erudite excursuses. This is nevertheless not a commentary only for scholars, but also—indeed, especially—for readers who want help in understanding what Matthew means for Christian living today. Keener provides his readers with a 71 page, comprehensive—if somewhat rambling—introduction. He describes the distinctive focus of the commentary as twofold: the social-historical context of Matthew on the one hand, and the nature of Matthew’s exhortations to his Christian readers on the other. Keener describes the former as a Jewish-Christian community, the second located perhaps in Syria. He writes: ‘My most striking discovery while writing this commentary was how often Matthew “re-Judaizes” his sources’. Assuming the common two-source hypothesis, Keener rightly notes that for the sake of his readers Matthew consistently makes Mark’s Jesus, more ‘Jewish’.

As for the relationship between Matthew’s community and the synagogue, Keener takes the minority view that a definitive break with the synagogue had not yet taken place. He affirms the argument of Andrew Overman that Matthew’s Christianity is best conceived of as a different form of Judaism from that of the non-Christian Jews. This conclusion, in my opinion, undervalues the radical newness of Matthew’s Christianity that made continuance in the synagogue virtually impossible. For all the Jewishness of Matthew’s viewpoint, there are marks in the Gospel that point to the Christianity of Matthew as necessarily separate from Judaism, though continuing in dialogue with it.

On the question of authorship, Keener notes that he has changed his mind since the 1993 commentary mentioned above, being now willing to accept, ‘the possibility of Matthean authorship on some level’. He is inclined to date the Gospel in the late 70s, thus a little earlier than the consensus. I note two striking characteristics of Keener’s commentary. First is his resilient and untiring defence of the historical reliability of Matthew. This position is not taken in a naive or dogmatic way, but is intelligently argued. Keener places the burden of proof on those who are sceptical about the historicity of the narratives. As an example, Keener says that the conclusion that Matthew invented the material that is unique to his Gospel ‘appears to be simply imagination run amuck’. Second is Keener’s refreshing defence of the supernatural.

Opposition to the possibility of miraculous events occurring in history Keener attributes to prejudiced Enlightenment presuppositions. This is a commentary, then, that is solidly evangelical, reflecting both a high caliber of scholarship and a firm commitment to the verities of the Christian faith.

It must be said that the format of the commentary itself is rather unusual. Keener does not proceed in the usual verse by verse manner, nor does he discuss everything in every verse. The result is that it can occasionally be difficult to find what one is looking for, and the treatment of the text is not equally thorough (some passages get very thin treatment for a volume of this size). Furthermore, instead of introducing his remarks in the customary fashion, by a lemma from the text, he employs his own analytical headings, in bold type, presumably based on the text’s ‘lessons or morals’. This presents an advantage in that the commentary can focus on the important and neglect the incidental. It may also present a slight disadvantage, however, in that it adds a level of interpretation as well as making it possible for the headings to drive the commentary as much as, or more than, the text itself.

Unfortunately it is not possible to sample the commentary in this short review so I will risk a few generalising statements. The strength and weakness of the commentary are the result of the approach Keener has chosen. It is clearly a fine success in getting at the teaching of the Gospel, and that after all is of the greatest importance. At the same time however, those who turn to commentaries often want to know about the incidental, the problematic, the supportive detail. Often Keener does not deal with this kind of material in sufiicient depth, despite the huge scholarly apparatus already noted. For example, the discussion of the difficult 27:51–53 is given in a mere 16 lines of text in which Keener affirms the resuscitation of the dead saints, but deals with none of the difficulties in accepting the story as a historical event. Keener has produced a distinctive and valuable and insightful commentary. With its abundant references to ancient literature and secondary literature, it can only be described as a remarkable tour de force. Solidly evangelical, deeply thoughtful, always informed and eminently practical, this is a commentary that will faithfully lead readers to the heart of Matthew.