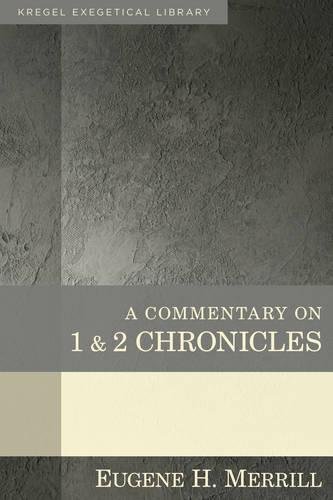 A Commentary on 1 and 2 Chronicles

Eugene Merrill’s work on 1–2 Chronicles adds to the Kregel Exegetical Library’s growing series of Old Testament commentaries which already includes volumes on Exodus, Judges, Ruth, and the Psalms. Merrill is a venerable Old Testament scholar whose career has contributed fruitfully to our understanding of the OT. In this commentary, he expounds on 1–2 Chronicles with the goal of being “exegetically helpful for the scholar but theologically accessible and homiletically useful for the pastor” (back matter). The majority of the commentary is dedicated to the exegesis of 1–2 Chronicles. But in the course of his analysis, Merrill also explores three theological themes in a redemptive-historical framework that are central to the Chronicler’s theology and purpose: David’s historical and eschatological reign, the renewal of an everlasting covenant, and the restored temple as a symbol of a renewed people (pp. 57–68). Merrill observes how the Chronicler used these themes to give hope to the post-exilic community for a restored kingdom under a messianic ruler.

Those who find themselves struggling with the place or usefulness of 1–2 Chronicles will find Merrill a sympathetic guide. He thus sums up the feeling of many contemporary Christians: “Like countless readers of the Bible I had, at least in my youthful immaturity in such matters, tended to regard the Chronicler as a later historian who merely repeated the message of his principal sources, the books of Samuel and Kings” (p. 11). But Merrill’s time immersed in the Chronicler’s writings taught him of the unique message that the Chronicler offers: “From his unique platform as arguably the last of the Old Testament writers, he saw with his own eyes the ruinous outcome of the incessantly repetitive covenant violation of his fathers and supplied a fulsome theological interpretation of its disastrous results. But he envisioned as well and rendered interpretation of the eschatological restorative and redemptive plan of God for a new Israel and a new David, one who would reign in righteousness not only over Israel but over the whole universe” (pp. 11–12).

The format is fairly typical of modern commentaries. Merrill begins with a thorough introduction to 1–2 Chronicles: the name of the book, issues of authorship, canonical placement, genres, structure, sources, and text-critical matters. But Merrill’s most detailed discussions are reserved for the historical and cultural setting (pp. 22–43), historiography (pp. 48–53), and theology of Chronicles (pp. 57–68).

Following the introduction is the heart of the commentary—exegesis and exposition. Merrill structures the commentary by citing the NIV along with text-critical notes, followed by his exegesis and exposition of the passage at hand. In addition, Merrill includes twelve excurses that readers may find beneficial for his discussions on the Chronicler’s use of sources, the Davidic dynasty, and the ethics of “Holy War.”

There isn’t room in a short review to comment upon individual exegetical decisions. But greater attention to two issues of methodology would have improved the commentary. First, the commentary would benefit from a more thorough treatment of a reading strategy for 1–2 Chronicles. As Merrill notes in his preface, many Christians see Chronicles as only a supplement to Samuel–Kings. Having two histories in the canon of the Old Testament raises questions of how we are meant to read Chronicles in relation to Samuel–Kings. Are we to read Chronicles alongside Samuel–Kings, taking note of each way in which the two histories diverge? Or should 1–2 Chronicles first be approached on its own merits as a book before considering what the Chronicler may have altered from Samuel–Kings (e.g., Rodney K. Duke, The Persuasive Appeal of the Chronicler: A Rhetorical Analysis, JSOTSup 88 [Sheffield: Sheffield Academic Press, 1990], 35–36)? Merrill briefly addresses this issue in Excursus 1, writing, “One can compare them for signs of various predilections, emphases, and interpretations of Israel’s past that add color to the overall texture of the Chronicler’s project” (p. 71). This is a standard approach to 1–2 Chronicles (e.g., Sara Japhet, I and II Chronicles, OTL [Louisville: Westminster John Knox Press, 1993]), but a more systematic discussion of how to read these historical books would have been a benefit to pastors and Bible teachers who struggle with how to preach and teach their distinctives without recourse to harmonizing them with Samuel–Kings.

Another weakness is the lack of attention to literary features. For each section of the text, Merrill gives a basic outline of the selected section (e.g., pp. 189, 497), but omits any explanation of how the text’s structure is significant for its interpretation. The result is that the exposition moves from section to section without explaining the Chronicler’s larger flow of thought. Further, there is a lack of attention to the narrative character of the book, which is surprising given Merrill’s recognition that 1–2 Chronicles is a narrative text (p. 47). In this regard, biblical scholars have benefitted immensely from work on Hebrew narrative in the last several decades. So more attention to plot and characterization would have enhanced the exegesis and exposition in the commentary, as well as recovering the theological significance of Chronicles, which has been unduly neglected in discussions of the Hebrew Bible as literature.

That being said, the clear strengths of Merrill’s commentary are his attention to the historical and cultural setting of the book. This sort of focus is in keeping with his prior work on Israel’s history (Eugene H. Merrill, A Kingdom of Priests: A History of Old Testament Israel, 2nd ed. [Grand Rapids: Baker Academic, 2008]). Anyone wishing for sustained treatment on the historical dimension of 1–2 Chronicles and the theology that emerges will benefit from Merrill’s work.