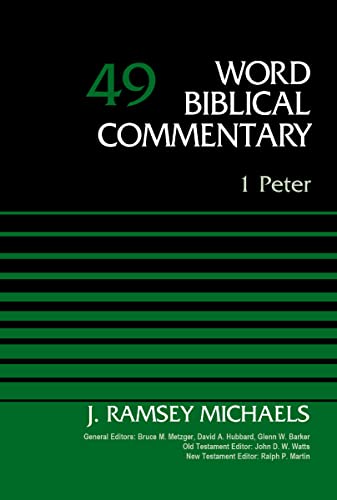 Word Books has published another of its excellent commentaries, following the same format of those we have appreciated before. And Ramsey Michaels has exhibited the fruit of a decade’s study on 1 Peter. We will be grateful to him for many years for his fine work. He has taken the best of previous commentaries, enriched that with the most recent scholarship, and provided by his own expertise an advance upon both.

1 Peter is a very important book in our changing world. It addresses the problems of Christianity as a minority religion, of the relationship of Christians to society, and of the church as the primary social group for Christians. In a remarkable way Jesus Christ is presented as the model for believers undergoing social ostracism and persecution.

For the New Testament scholar the exhaustive bibliography for each paragraph, the complete text critical notes, and the clear, efficient presentation of the commentary will be a rich reward for careful reading.

Michaels has a pleasant writing style. His translation of the Greek text is fresh with a natural flow in English, yet it remains a careful representation of the original message. His ability to represent another scholar succinctly and utilize or respond to that information precisely gives the reader an efficient reading experience in the interpretation of the text.

While he is aware of modern trends in New Testament scholarship, he is not taken in by any extremity. He knows sociological exegesis yet takes a moderate stance on the issues of ‘aliens and sojourners’. He is aware of American disputations regarding sex roles, but does not allow that to blur the text either in favour of aggressive feminism or staunch patriarchalism. Rather he interprets the actual message of the text in the sociological setting of the early church. He is then careful to generalize only that material which on good hermeneutical principles has general application for the church universal.

He interprets ‘weaker vessel’ as ‘somebody weaker’—as the opposite of the ‘physical superiority and social advantage’ of the husband in the characteristic opinion of the day. Not that Michaels (or Peter) makes this the issue, but that this social prejudice creates the need for Christian husbands to honour to their wives, and treat them as their equals. I appreciate the appropriately moderate word ‘defer’ in place of a misunderstood ‘submit’.

I would add an observation that Michaels has not mentioned in his analysis of the Haustafel of 2:13–3:12. Peter differs from Paul who makes a rather straight-forward presentation of these ‘rules of the home’. Paul certainly did modify the content of these Hellenistic materials to correspond to Christian perspectives, such as the inverted definition of headship in Ephesians 5. Yet he addressed the social pairs directly. But Peter’s concern is not so much with the standard relationships between each social pair, but focuses particularly upon the exceptional feature of each relationship which might cause the Christian to beg out. That is, for slaves it’s the perverse master, for wives it’s the unbelieving husband, for husbands it’s the inferior status of the wife, and among Christians it’s the tendency toward vengeful interpersonal relationships. Peter emphasizes that even in these inopportune situations the Christian is bound to the social order, and must defer whether for actual benefit (wives) or divine gratitude (slaves).

The most debated passage in 1 Peter regards the ‘spirits in prison’ in 3:18–22. Michaels interprets this passage in the context of 3:13–4:6, which he captions as ‘The Promise of Vindication’. The important message of the paragraph (as continuation of 2:22–25) is that Christ is the example of suffering followed by vindication. Thus the journey of Christ is neither a harrowing of hell, nor evangelistic preaching to the dead, nor a Christophany in the time of Noah. Rather the spirits are the offspring of the ‘giants’ of Genesis 6:4 (LXX), who now harass humankind, even as the evil and unclean spirits of the Gospel record. The journey of Christ was to their remote refuge (phylakē), where he announced to these spirits that their hideaway was no longer inviolate. This triumph of Christ gives exemplary courage to those Christians who endure the persecution which is impelled by such evil spirits. Michaels bases his interpretation upon the immediate and larger context of 1 Peter, a very careful scrutiny of the actual words and message in the passage, the underlying gospel traditions, and the ideological context of the first century. It is exegetically sound and theologically consistent with the New Testament message.

Introductory matters are handled cautiously. Michaels asserts that the authorship of this letter cannot be settled with ‘absolute certainty’. As a semiofficial communication it could well have been actually written by a professional—though not Silvanus, who more likely was the bearer of the letter. Michaels describes several features in the letter which suggest a life situation more like that after the destruction of Jerusalem than during the Neronian persecution—the reference to ‘Babylon’ and to a single community of Christians in Rome, the compliant attitude toward the Roman emperor, and the similarities with the situation described in the letter from Pliny the younger c. ad 110.

Yet Michaels concludes that the burden of proof lies with those who assert non-Petrine authorship. This is based upon the indefinite information about the time of Peter’s death, on Peter’s interpretation of the Christian message which falls well within the parameter of the Gospels and Paul without being dependent upon them, and the restraint in the personal references to Peter. ‘T[he] traditional view that the living Peter was personally responsible for the letter as it stands has not been, and probably in the nature of the case cannot be, decisively shaken’ (p. lxvi f). This may seem a bit cautious, but the introduction gives due attention to the critical issues and avoids improper romanticism.

The rest of the introduction is equally thorough, and rich reading. Michaels makes a careful analysis of the structure of the letter and works on the assumption of the unity (‘integrity’) of the letter. The section on ‘Sources and Literary Affinities’ is complete and judicious. The material on ‘Audience: Gentile Christians’ and ‘Genre: An Apocalyptic Diaspora Letter to Israel’ provides a complete treatment of all the evidence—internal, New Testament and external. ‘Theological Contributions’ focuses only on the Trinity—with justification included. But I wish that some of the more profoundly implicit categories had been elaborated by such a thorough and careful exegete. These categories include ecclesiology, eschatology, church and society, soteriology, and Scripture. And then I realize the great effort and space this would require, and why Word has published a separate volume by Michaels (Word Biblical Themes: 1 Peter), which we must read.

This is a great commentary, one which every evangelical interested in 1 Peter must use. The wealth of material, judicious insight and careful identification with Peter’s intended message also makes it a treasure store for a broad range of scholars.