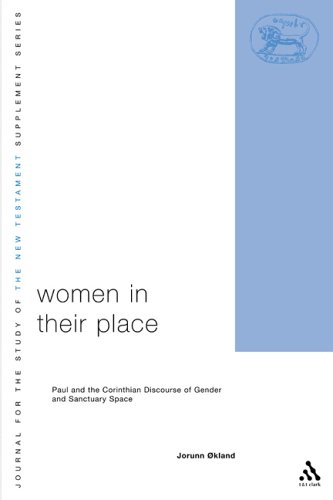 WOMEN IN THEIR PLACE: PAUL AND THE CORINTHIAN DISCOURSE OF GENDER AND SANCTUARY SPACE

Women in Their Place: Paul and the Corinthian Discourse of Gender and Sanctuary Space by Jorunn Økland is a complicated, difficult book requiring a dose reading. These are complimentary, positive statements. Økland, a lecturer in the Department of Biblical Studies at the University of Sheffield, bases the volume on her thesis presented to the University of Oslo in 2000 (viii).

Women in Their Place takes 1 Corinthians 11–14 as a point of departure. The section contains many of Paul’s most well-known passages concerning women set amid the larger emphasis of Paul’s demands that ritual gatherings happen in a certain manner according to a divinely willed order (1).

Økland’s work advances the academy’s current interest on the concept of space in the biblical text. She maintains that Paul’s exhortations concerning women’s ritual roles and ritual clothing in 1 Corinthians 11–14 must be seen against a backdrop of a broader discussion taking place in Roman Corinth about gender and ritual/sanctuary space (1). She emphasizes that the place is Corinth. She underscores by her choice of the word women that texts on women presuppose a gendered universe with places for both men and women (1).

Perhaps her most helpful clarification is the caution that sanctuary spaces and ritual spaces should not always be identified with the discourse on public space, since a discourse on ritual often gives a different and more prominent place to women (4).

The book studies in detail the intersection of two terms: gender and ritual space. Økland sees 1 Corinthians 11–14 as a kind of ‘hypertext’ participating in a web of other texts that are linked together in many ways. She endeavours to find out what certain gender terms may have connoted in their ancient discursive contexts (38). She finds that although Paul draws explicitly on the Adam-and-Eve model, he favours a one-sex-model because it underlies his idea ‘that both men and women can become one Man in Christ’ (77).

She brings out the fact that Corinth, a commercial city, was undergoing transformation. It was adjusting to an influx of Greek, Jewish, Egyptian and other ritual practices and adapting them to its Roman colonial paradigms of religion. In this situation, she writes, ‘Paul has a certain possibility of choice in his adjustment of the Christian ekklesia to the presuppositions and dynamics’ of the current Corinthian discourse (130).

She sees ekklesia as a ritual gathering, a sanctuary space properly set off from daily life (166). Clear verbal boundaries distinguish ritual and home spaces. Paul makes such a distinction, and uses it to legitimate that the Lord’s meal should not be an ordinary meal and that the practices of women in a household are not automatically proper when Christians gather for worship (166). She rightly sees implications of purity and unity as part of Paul’s emphasis on sanctuary space (166).

Økland reads 1 Corinthians 11–14 as addressing issues to a collective ritual body that is concerned about collective and not matrimonial issues (217). Within ritual space, issues of women’s and men’s places, patterns of action and speech, clothing and other things ‘should be kept distinct and hierarchically ordered’, Økland writes (217). Paul is not concerned with gendering the ekklesia or with putting a particular view of women into practice, instead, the utterances about women form part of a broader project on ritual order and place-construction (217).

Økland finds that ‘woman’ is an empty term with a changing context. It is not ‘her aim to construct women of the past in Corinth with whom modern women can identify’ (218). She concludes that Christian women in 1 Corinthians 11–14 cross boundaries between inclusion and exclusion; they, like their secular counterparts in Corinth, both belong and don’t belong and are both within and without (223).

Økland concludes that the social atmosphere in Corinth affects Paul’s writing to the church there. Places for women and men are ambiguous in the texts available. He uses the terms ‘woman’ and ‘man’ in different ways that leave us modern readers now unsettled. This unsettledness ‘has left an ocean of possibilities of gender constructions for the readers and recipients of these texts’, she writes (246).

Perhaps a guideline for scholars and church folk alike is to read 1 Corinthians 11–14, and especially Paul’s passages about women and men, with a sense of fluidity, conscious that Paul wrote to a community both changing and flexible, both redeemed and living among non-believers. Paul in all cases seeks to build a sanctuary, ritual, holy space with human believers—both male and female—as participants in worship.