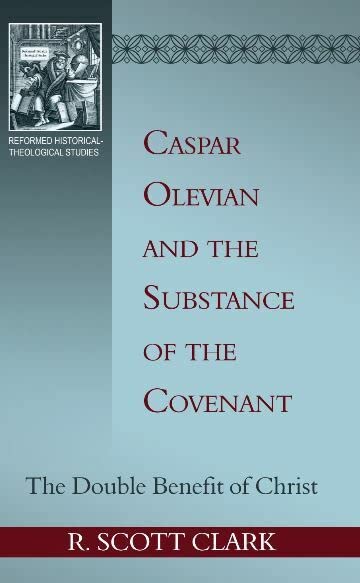 CASPAR OLEVIAN AND THE SUBSTANCE OF THE COVENANT: THE DOUBLE BENEFIT OF CHRIST

This volume is a great contribution to Reformation Studies and Historical Theology. Though Caspar Olevian (1536–1587) was a primary author of the Heidelberg Confession and described by Barth as the ‘voice of Calvin’, this ‘Reformer of Trier’ remains a somewhat neglected figure. Clark states that this present work on Olevian will ‘trace the details of his [Olevian’s] theological system through a series of chapters describing his doctrines of God, Christ, salvation, and the Christian life’ (p. xviii). Clark’s thesis is that Olevian’s theology is centred around the covenant and its dual benefits in Christ, which are justification and sanctification, for and inthe believer respectively.

Clark outlines his thesis through a series of cogent and very well researched chapters. First they set Olevian’s historical context; second his life and ministry; and third his Scholastic Humanism. Chapter four treats Olevian’s Trinitarian theology with special attention to document studies. Chapters five, six and seven focus upon his Federalist Christology, his understanding of justification and sanctification in that order.

In my opinion, chapters four and six are the highlights of the volume. These serve to demonstrate the comprehensive character of this work. Chapter four treats Olevian’s Trinitarian theology with special attention to document studies, the influences upon Olevian’s theology such as Calvin, and the use of terminology such as ‘substances’. Chapter six begins with Olevian’s commentary on Romans. It then proceeds to outline his theology of justification, the ensuing debate with Canisius, Olevian’s understanding of the relationship between Federalism and Justification, predestination and justification, and finally the Pactum Salutis and the Trinity.

There are many other incidental treats for readers who are keen teachers and historians, for example, the reader gains an insight into Olevian’s teaching methodology and intent (51–52, 55). The reader also gains an overview of the ministries and fates of many smaller characters in the Reformation.

The weakness of this volume is its brevity. There are topics which are not treated to the extent they deserve, for example, though the work of the Holy Spirit does receive attention it could have been fleshed out to the benefit of the reader who does not have access to Olevian’s works. A smaller matter is the vexed issue of the use of Latin. Clark uses Latin in the footnotes without giving the translation. This may be a limiting factor for many readers, and certainly slowed this reviewer’s reading! The use of both the Latin and its translation would make the footnotes more accessible, therefore the reader would be more likely to follow Olevian’s thought more closely.

In sum, the strength of this book is the author’s use of primary sources and his clarity in presenting the context and theology of Caspar Olevian.