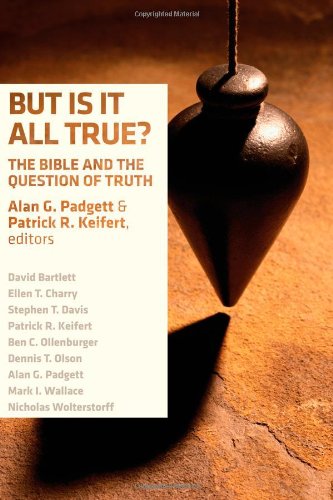 BUT IS IT ALL TRUE? THE BIBLE AND THE QUESTION OF TRUTH

‘When we say that the Bible is true, what do we mean?’ It was this simple question which sparked off a round of discussions that eventually led to a symposium of eminent theologians and philosophers, of which this book is the published record. That the question is badly put and cannot be answered in any very simple way is readily acknowledged by all of the contributors, who are united mainly by their belief that propositional truth is not the only kind that exists, and that in many respects it is a model which is inappropriate to the Bible. It is clear that the authors are trying to escape from what they regard as a narrowly literalistic fundamentalism, though as always in such cases, it is difficult to pin down precisely what it is that they are rejecting. Is there anyone who seriously questions the multi-faceted nature of truth, or who reads the Bible so woodenly as to suppose that it is nothing but a series of propositions?

The answer to their somewhat artificial problem seems to be that ‘truth’ involves faith commitment. What I am prepared to accept and believe becomes true for me and works itself out in my life accordingly. Occasionally we get something more objective than this, as when Nicholas Wolterstorff claims that God has ‘appropriated’ Scripture as a vehicle for conveying his truth, though what that means (and how we are supposed to verify such a claim) remains a mystery. Most people who talk about the ‘truth’ of the Bible have in mind the correspondence between what it says and what can be demonstrated to be historical or scientific fact. Discrepancies, whether they are apparent or real, become the problem, but their very nature makes a simple solution impossible. Every case must be weighed on its merits, and very often we find, as Stephen Davis admits, that the answer is hidden from our eyes. We simply do not have all the data in front of us to be able to judge one way or another. The fact that we often ask questions which the text was not designed to answer merely compounds our difficulty. In many respects therefore, a short book like this cannot even begin to grapple with the issues involved and what we end up with is a series of impressionistic sketches whose value (and validity) depends entirely on the author’s own chosen presuppositions.

Unfortunately, reasoning of this kind is unlikely to be very persuasive outside the ranks of those who are already committed to it. The truth of Scripture is not entirely propositional, of course, but a large part of it is, and it does not help to have this important ingredient shunted off to one side before the discussion begins. Personal faith commitment is certainly necessary, but this supplements the facts and does not fly in the face of them. What belongs to the realm of faith and religious experience can only be verified by those who have had that experience, which in Christian terms means an encounter with the living God. Those who know him recognize his voice when they hear it, and that voice comes through loud and clear in the Bible. It cannot be explained in purely philosophical terms; as the handmaid of theology, philosophy can support theology but cannot determine what it will be. That is the prerogative of Almighty God, who reveals his truth to those who are humble and obedient, whether they are intellectuals or not. This is why the cross is foolishness to the Greeks; its ‘truth’ rests on a foundation other than human reason and so is rejected.

It is hard not to conclude that this volume asks the wrong questions and so inevitably comes up with the wrong answers, if indeed it comes up with ‘answers’ at all. It is at least clear, after reading this book, that the matter requires a much deeper and more nuanced investigation than the one offered here. The original symposium may have been a stimulating occasion, but sadly the finished product leaves a great deal to be desired.