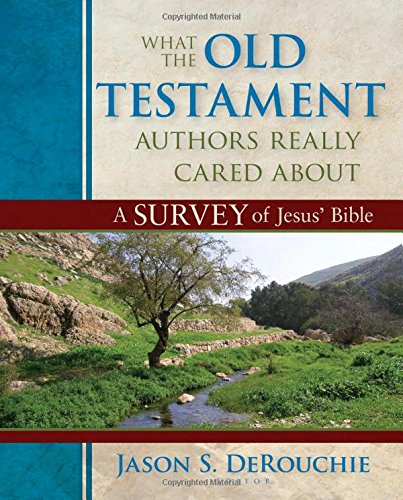 What the Old Testament Authors Really Cared About: A Survey of Jesus’ Bible

The genre of Old Testament primer suffers from an identity crisis of sorts. On one side are “introduction” textbooks that seek to orient beginning students to the canon, history, and culture of the OT. On the other side are “survey” textbooks whose titles suggest a summary glance at the books of the OT themselves. In practice, however, features of both types (sometimes respectively labeled “general introduction” and “special introduction”) usually come together as a hybrid. Most self-styled “introductions” not only provide background information but also present each of the OT books (e.g., T. Longman III and R. B. Dillard, An Introduction to the Old Testament, 2nd ed. (Grand Rapids: Zondervan, 2006]). Much the same can be said of “surveys” which set the message of each OT book in broader contexts such as ancient Near Eastern studies, evangelical interaction with critical scholarship, and Christian theological interpretation (e.g., A. E. Hill and J. H. Walton, A Survey of the Old Testament, 3rd ed. [Grand Rapids: Zondervan, 2009]). For teachers, there exists a real need for a primer that touches upon everything in light of how many institutions can only allocate a single course to the OT. Yet the comprehensiveness demanded of a one-term primer means that such a textbook will be lengthy, usually 500 pages or more. This makes it difficult to design an OT survey course with many assignments beyond reading, especially since the rising tide of biblical illiteracy makes reading the OT itself a necessary requirement. Students who view the OT as a random assortment of facts need to grasp its unity so as not to be overwhelmed by the diversity of its individual books.

What the Old Testament Authors Really Cared About, edited by Jason DeRouchie and containing the work of sixteen other contributors, is well-positioned to meet these needs. Being more focused than the usual OT survey or introduction, this book “attempts to present the essence of what is revealed in the Old Testament, with a conscious eye toward the fulfillment found in Jesus as clarified in the New Testament” (p. 13, italics original). This theological thrust is reinforced by the unique feature of presenting the OT books in the Jewish canonical order reflected in Baba Batra 14b (e.g., 1–2 Samuel as a single book, Jeremiah and Ezekiel before Isaiah). The move away from the familiar Protestant sequence leads to an exploration of the Jewish canon’s threefold depiction of God as Savior (Torah), Sovereign (Prophets) and Satisfier (Writings). Each book of the Jewish canon and its anticipation of various NT themes is the subject of its own chapter. Also, throughout the book are numerous mnemonic devices, informative sidebars, lists of key verses/themes, and color photographs that round out an attractively designed package.

A sampling of individual chapters on books from the Law, Prophets, and Writings can serve to illustrate the many strengths and minor weaknesses of emphasizing the theological unity of the Bible that Jesus knew. In the chapter on Genesis, for example, Stephen Dempster gives little space to debates over creation or Mosaic authorship in favor of showing “the purpose of creation in relation to its one, loving, transcendent creator” (p. 63). Following a brief treatment of the Fall is a longer, devotionally inspiring section on the gospel promise of universal restoration through one of Eve’s descendants.

Similarly, the sixteen pages of Gary Smith’s chapter on Isaiah are a thematic exploration of the dangers of pride and apostasy, the call to trust God, the suffering Servant’s payment of sins for many, and the biblical author’s longing for God’s glorious kingdom (pp. 280–92). Historical background about the Assyrian era is provided only when relevant to the aforementioned themes and their significance for the Christian today. No mention is made, however, of the historical-critical consensus that much of Isaiah was written or edited long after the Assyrian crises of the eighth century BC.

For the Writings, the third part of the Jewish canon that has tended to defy attempts at uncovering its sequence, the textbook presentation of these books under the rubric of “The Old Covenant Enjoyed” (pp. 319–23) is helpful for characterizing some books but less descriptive of others. The investigation of Chronicles as the last book of the Hebrew Bible traces many important links to the NT (e.g., Davidic dynasty, Temple theology), while it seems a stretch to characterize Lamentations as “hope for those remaining confident in God’s reign and faithfulness to his own” (p. 323) when its searing poetry of doubt and anger outnumbers references to faith and trust. This chapter on Lamentations also reflects a broader uneasiness in the book with conceding that a good deal of the OT is anonymous, an irony given the book’s title, What the Old Testament Authors Really Cared About. Readers find on the very same page, for instance, statements about “the [anonymous] author of Lamentations” (e.g., p. 405; cf. pp. 400, 402) alongside summaries of Lamentations 3 and 5, respectively, as “Jeremiah’s Pain” and “Jeremiah’s Plea” (Figure 21.1, p. 405). The editor and contributors are certainly aware of the difficulty of identifying the authors of some OT books (pp. 14–15), but the textbook’s status as a companion volume to Kenneth Berding and Matt Williams’s What the New Testament Authors Really Cared About (Grand Rapids: Kregel Academic, 2008) may obscure the reality that authorship and canonization for OT books can be less straightforward than for the NT.

These small issues notwithstanding, Jason DeRouchie and his team of contributors have provided an outstanding OT survey textbook, which models warm faith and thoughtful attention to the larger theological themes running from the OT into the NT. Teachers and students alike can rejoice at this gift, which follows in the footsteps of Jesus by interpreting the Jewish scriptures as “everything written about Me in the Law of Moses and the Prophets and the Psalms” (Luke 24:44).