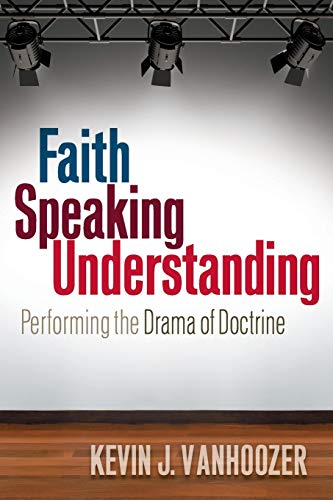 To assess this book properly, we must begin by referencing Vanhoozer’s previous work The Drama of Doctrine. While there are points of contact between the works, Faith Speaking Understanding is neither a distillation nor popularization of Drama of Doctrine. The author suggests that it is better to view this volume picking up where the previous one left off and yet targeting a different audience. But while the book does not require the same background knowledge of theological arguments about doctrine and theology, it is not necessarily a lighter read.

In Part 1 Vanhoozer lays out his premise. First, Christian doctrine is not dry information that is mentally assented to but disconnected from daily life, but rather serves as directions in how to enact the Christ-life faithfully. Second, the role doctrine has in the life of the church can be best articulated through the use of theater and drama as an extended metaphor. Recognizing the uniqueness of the dramatic metaphor for addressing doctrine and church practice he makes a case for the fitness of dramatic concepts for capturing what should be the dynamic relationship between doctrine and practice in the church. Most importantly, theatrical language draws out what is often lacking in doctrinal education: the necessity of living out the faith, of “performing” what we believe. Church and humanity are caught up in a drama in which the Divine Dramatist invites audience participation. Fitting participation involves faithfully enacting “what is in Christ,” a key phrase throughout the book. (He also addresses concerns with the use of the theatrical metaphor both here and in an appendix).

What follows in Part 2 might rightly be considered a dramatic theology in outline, bearing many of the marks of systematic theology in that the following chapters canvass the main theological loci, though in an admittedly distinct manner: theological anthropology, Trinity, Scripture, Christ and salvation, and church.

To begin, Vanhoozer presents the malaise that is the contemporary crisis of identity and authenticity and offers what could be called a theological anthropology of incarnational communicative action. It is communicative action that defines being and it is in Christ that both divine and human communicative action reach their apex. Christ is the authentic divine-human actor and we are most authentically human when we act as he did.

In what may be the most challenging section of the book for many readers, Vanhoozer roots the drama of redemption in the Trinity. That is, “God’s mighty work in the history of redemption enacts the perfections of God’s inner life” (p. 74). Both in eternity past in himself and in his action in the drama, God has been involved in self-communication. The interaction of the Father and Son in eternity past—sharing glory, life and love—corresponds to their relationship in time. Here Vanhoozer delves into the question of the divine decree, giving it a dialogical twist by discussing it first as covenant between Father and Son regarding the plan of redemption and their respective roles. This pactum salutis roots the substance of the drama of redemption in the divine relationships before the world began. From there he depicts the mission of the Father’s sending of the Son as an instantiation in time of the eternal procession of the Son. This is the view of the drama “from above.”

In the same chapter Vanhoozer also considers the drama “from below.” The divine drama can be seen as a series of entrances and exits or moves between heaven and earth. Though brief, some of his comments on the relationship between heaven and earth here offer a much needed corrective to the simplistic ideas that often hold sway. But it is also here where Vanhoozer weighs in on the structure of the biblical drama and how one ought to divide it. He interacts with the proposals of N. T. Wright (5 acts: Creation, Fall, Israel, Jesus, Church), Samuel Wells (5 acts: Creation, Israel, Jesus, Church, Eschaton), Craig Bartholomew and Michael Goheen (6 acts: Creation, Fall, Israel, Jesus, Church, Eschaton). Perhaps not surprisingly, he chides them for never considering what constitutes a dramatic act. He proposes a five-act drama in which each act centers on a key action in the outworking of the divine decree. His acts, therefore, are: Creation, Election of Abraham/Israel, Sending of the Son, Sending of the Spirit, Return of the King; a noticeably more theological rather than strictly narratival organization. Both here and in the discussion of the pactum salutis one can begin to see the role that covenant plays in Vanhoozer’s understanding of the plot of the drama. Before closing this key chapter, he sketches his conception of the plot of the drama in such a way as to weave together the themes of covenant, kingdom and courtroom.

These foundational matters set, he moves to consider how the Christian should act in light of the nature and direction of the drama. In short, the Christian’s call is to put on Christ, to act out Christ. Here he addresses the question of whether this dramatic model encourages “faking it.” He exploits acting theory to suggest that true acting involves inhabiting the role as totally as possible. Here, too, he addresses the ministry of Word and Spirit in forming the actors.

Two more chapters engage directly with the church and its dramatic role within and without. Church practices such as catechesis, confessions, and the creed are for the purpose of rehearsing doctrine and preparing for performance outside the church. Key elements of his practice are reconciliation, fidelity (especially in marriage), generosity, and hospitality. He also addresses the Lord’s Supper at some length as a particularly dramatic moment in the church’s performance of the Gospel. With reference to its acts in the world, Vanhoozer steers the church away from thinking it exists to effect redemption in the world toward a call to proclaim that redemption has come. The church does this through careful improvisation on the biblical and doctrinal themes rather than mere repetition. This improvisation is constrained principally by checking it against Christ.

Most readers will find something to quibble with either in the dramatic metaphor or in the theological content. At various points this reader wished that the book was either longer or shorter. Several issues could have benefitted from greater development and other pieces seemed repetitive. Since the emphasis is on “rehearsal” and “performing” one might have expected more reflection on the spiritual disciplines such as prayer and fasting.

It is a bit difficult to say if readers will find this work practical and helpful. While there is little doubt of the author’s immense creativity and freshness of thought, sometimes this surplus of creativity threatens to undermine clarity and succinctness. Each reader will have to decide if the dramatic metaphor works at the broadest level, but it seems clear that dramatic language and concepts do offer new and poignant ways to speak about doctrine and the performance of the faith.