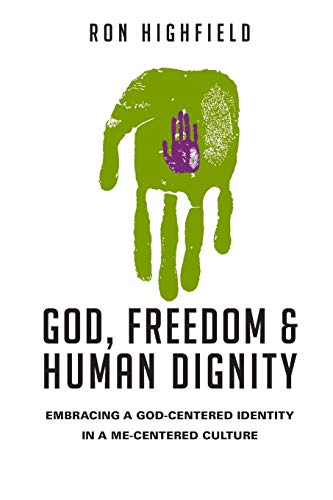 God, Freedom and Human Dignity: Embracing a God-Centered Identity in a Me-Centered Culture

Bred from a pastoral concern for the frequent indifference toward God displayed particularly by young Westerners, Ron Highfield endeavors to show that God and the gospel fulfill key human aspirations rather than dampening them. He contends that God does not threaten human freedom or dignity but rather grounds and completes them.

The first part of the book diagnoses the “me-centered self” of contemporary culture by showing the historical path toward founding dignity within the individual. God has come to be viewed as a competitor. His freedom and power impinge upon my own. His exhaustive knowledge invades my privileged inner world. I may then respond with Promethean rebellion (ch. 2), mercenary and idolatrous subservience (ch. 3), or the indifference of the aesthete, success-driven, fame-seeking, or agnostic (ch. 4). If God has complete freedom, power, presence, and knowledge, then it would not appear that there is any room for me (ch. 5). Anything that is my own—my freedom, my space—are completely squeezed out of existence. Since I may wish to establish my worth (dignity) and freely pursue my desires to determine my own destiny, God will be perceived as an enviable, competitive threat (ch. 6). However, these human aspirations for self-determination don’t withstand scrutiny (ch. 7). The range of options available to me always restricts my freedom. I lack knowledge of the consequences of my actions and of the deepest recesses of my self. It is deluded for me to believe I am self-caused.

Part two, on the God-centered self, aims to show that the Christian understanding of God and humanity grounds “perfect freedom and the highest dignity conceivable” (p. 113). Free creation and free redemption show the gracious love God has for humanity and confer dignity upon us as a reflection of the love relations within the Trinity (ch. 8). Clearing up misconceptions concerning God’s power (ch. 9) and God’s presence and knowledge (ch. 10) shows that God sustains our dignity rather than threatening it. The Incarnation perfectly exemplifies God-dependent humanity (ch. 11). In adoption, we are called to resemble God’s character and love in a godly manner (ch. 12). Our freedom is then affirmed when it perfects our God-given nature and telos, and avoids the slavery of sin (chs. 13–14). Our dignity derives not primarily from our natural or moral excellence but from the relationship of being loved by God (ch. 15). The conditions of separation, scarcity, and unfulfilled desire that tempt us toward competition with God will be erased in future full union with God (ch. 16).

The book provides useful and accessible correlations between conceptions of humanity and the implicit theology behind them, showing that every account of the nature of the human person also has an understanding of God’s nature in the background. Highfield skillfully links theology to cultural concerns and philosophical reflection while sensitively responding to concerns present within the culture.

The book is not a thoroughgoing theological anthropology, nor is its purpose to provide detailed theological discussions of core concepts such as the atonement, the image of God, or the Trinity. In contexts where accessibility is needed, this will be a strength. For this reason, I could envision this book being used in introductory Christian worldview or theological anthropology courses, or as a supplement to more advanced discussions of these topics. I believe advanced church study groups could make good use of it, and those in ministry will find it useful for contextualizing the gospel among contemporary Western religious skeptics, and perhaps religious “nones.” Those ministering to teens and young adults will particularly want to absorb the content of this book.

The strength of accessibility also comes with loose philosophical and theological interpretations and formulations. Explication of the ideas of modern philosophers in the early parts of the book closely follows the analyses of Charles Taylor and of Alasdair MacIntyre; those are fine sources, yet in places the original positions suffer distortion. Theological argumentation in the book depends fairly extensively on a kind of Hegelian “social” or relational trinitarianism. Perhaps the most clear instance of this occurs in the pivotal conclusion that “dignity is a relation of love in which one person bestows worth on others by loving them” and therefore “our dignity and God’s dignity have the same ground: the love of the Father, Son and Spirit” (p. 204). At least in the case of God, it would seem that dignity is intrinsic rather than contingent on the recognition of another. As formulated by Highfield, dignity becomes a property of the triune person and not of the divine essence. Only in loving himself does God find dignity. This supposedly relational interpretation of dignity would appear to fall prey to some of the same criticisms Highfield made against modern thought in earlier parts of the book.

Fortunately, many of the conclusions remain sound and insightful independently of a few questionable theological and philosophical assumptions. For instance, Highfield thankfully does not bow to the fashionable and misguided trend of affirming a purely relational or functional perspective of the image of God, but allows for an intrinsic understanding of the image as well.

Dignity and freedom certainly concern modern people. How pervasively do worries about them thwart acceptance of the gospel? I’m not able to say. Insofar as they do, this book will be a useful and sought-after resource.