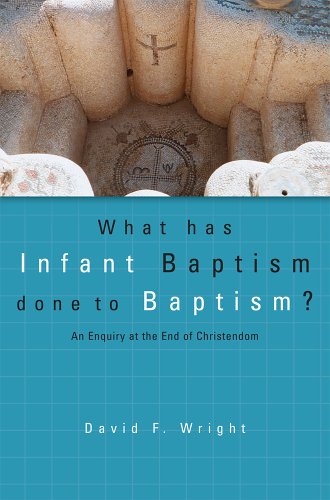 WHAT HAS INFANT BAPTISM DONE TO BAPTISM? AN ENQUIRY AT THE END OF CHRISTENDOM

The 2003 Didsbury lectures, sponsored by the Nazarene college in Manchester, are an opportunity for a re-examination of some aspect of Christian theology and practice, and David Wright has taken full advantage of this in his searching critique of infant baptism. Broadly speaking, he starts with the assertion that believers’ baptism is the NT norm, and that infant baptism co-existed with it (as a minority option) for several centuries. Only after ad 500 did the latter become all but universal for a thousand years, since which time it has remained the dominant practice in the mainline churches. The Anabaptists were fiercely resisted by other reformers and never managed to persuade more than a small minority of them, so that it was only in the twentieth century, with the apparent collapse of ‘Christendom’ that infant baptism has been seriously challenged in the mainline churches.

The basic problem, to which Professor Wright keeps returning, is the obvious fact that so many baptized infants do not become believers in adult life. There are many nominal Baptists as well of course, but at least that is their own fault! The difficulty for paedo-baptist churches is to know how to solve their problem. Rejecting infant baptism altogether is not an option, because there is still a large and influential body of churchmen which insists on retaining it for a variety of theological reasons. Hedging it about with restrictions is a more promising way forward, but that also has its problems. Some people will say anything to get what they want, and then never be seen again. Whether baptism can ever be based on profession of faith alone is doubtful, and the physical rite cannot guarantee the spiritual blessing which it is supposed to represent. Perhaps what is required is a greater focus on baptism as an extension of the kerygma, rather than as an expression of personal belief. This is a dimension which professor Wright does not explore in depth, but it may offer a way out of the current dilemma without abandoning infant baptism altogether. The gospel message is a constant to which responses differ, and not everyone hears it in the right way, however hard we try. As Baptists have discovered, rejecting one form of baptismal practice merely leads to problems of a different kind, and so it will remain as long as flesh and blood has to wrestle with the Spirit of the Lord.

Dr Wright has raided an important question, examined the various possibilities and wisely refrained from offering a dogmatic answer. At least the issues are back on the table and open for discussion, though what will eventually emerge from that is still far from clear.