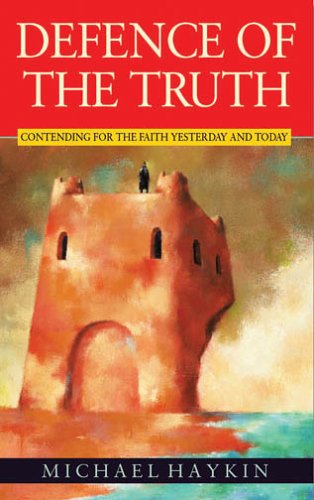 DEFENCE OF THE TRUTH—CONTENDING FOR THE TRUTH YESTERDAY AND TODAY

Defence of the Truth is a short, engaging and easy to read book with an interesting and unusual premise: that a primary school for learning how to do apologetics should be the way that the task was carried out by the early church. The author therefore sets out to give us something of a primer in both early church history and apologetics.

The book is divided into six main chapters each drawing lessons in apologetics from an early apologetic writing or controversy:

Each chapter ends with a brief note of lessons that can be drawn for today from each episode. These include that apologetics must:

Along the way there are useful short historical sketches of Gnosticism, the formulation of the Nicene Creed and the life of Augustine.

While attempting to link the lessons closely to the biographical and historical discussion that precedes it they are also clearly the author’s own definition of apologetics.

One minor criticism is the way the author moves fairly seamiessly from commentary on the early texts to editorial comment. Indeed I couldn’t avoid the impression that one or two chapters were included to illustrate the author’s view in a slightly forced way rather than to speak for themselves. This seemed particularly true of the chapter on Patrick and the brief appendix on modalism that feels tacked on without enough explanation for why it is there.

Not all readers will concur with the choice of episodes presented nor the conclusions drawn. The chapter on Origen and Dionysius’ rebuttal of Irenaeus’ view of the Millennium, with discussion about how literally or non-literally we should approach various parts of Scripture, leaves the reader in no doubt about the author’s amillennial approach. The chapter is written with a generous spirit but the conclusion that ‘contrary to what some thought … premilleniumism was not a heresy’ will not resonate with all.

All criticisms aside I enjoyed this volume very much. It attempts a lot in a short space with a good measure of success. The book is accessible to a general readership and should be appreciated by students. Haykin succeeds in writing on sometimes provocative subjects in a way that is eirenic and helpful. Speaking of Irenaeus he says that, while his apologetics are rigorous, his heart is that of a pastor seeking the spiritual formation of hearers. The same could be said of this volume.