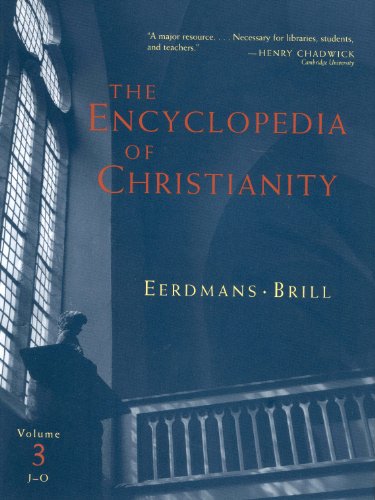 THE ENCYCLOPEDIA OF CHRISTIANITY, VOLUME 3, (J–O)

This is the third part of the five-volume Encyclopedia of Christianity, which is establishing itself as a major reference work for a wide range of readers. The encyclopedia is a translation of the third revised edition of the German Evangelisches Kirchenlexikon: Internationale theologische Enzyklopädie, with significant enhancements and additions. Among these are articles on most countries of the world, including former Communist countries which have gained their independence since 1989, the latest statistical information on religious affiliation in each country, seventy additional biographical articles on prominent figures in church history and many expanded or new articles on topics of particular interest of English-speaking readers.

This volume continues to purses the aim of presenting Christianity in its global context, its ecumenical context, its sociocultural context and its historical context. Once again a wide range of contributors has been assembled and, although the majority are German, many other countries are represented.

Volume 3 covers the spectrum from Jacob to the Oxford Movement, taking in along the way Judaism, John Knox, Language and Theology, Leisure, Lithuania, Marginalized Groups, Medical Ethics, Millenarianism, Mormons, Mystical Union, National Association of Evangelicals, Necrology and Nomads. The treatment of subjects is comprehensive and usually sympathetic. Difficult issues can, nevertheless, be raised: the article on the National Association of Evangelicals, for example, highlights a number of perceived problems which the author believes may threaten the organization’s future place in evangelicalism. The division of longer articles among several contributors sometimes allows the emergence of a diversity of perspectives, as in the entry on Mary, Devotion to, where contributions from feminist and liberation theology accompany a review of the traditional Roman Catholic position. Articles on particular countries will inevitably date rapidly. The entry on the Netherlands will certainly help readers to navigate the complexities of the Dutch ecclesiastical scene, with its plethora of Reformed Churches, but its treatment of the ‘Together on the Way’ movement naturally cannot consider the recent outcome of this process in the formation of a new denomination, the Protestant Churches in the Netherlands (PKN).

In regard to biblical studies, the stance of contributors is generally reflective of a critical approach to Scripture, although not always of the most recent scholarship. The short entry on Jacob, without any discussion of the credibility of the documentary hypothesis, confidently divides up the material in the Genesis narratives among, J, E and P. The article on the book of Judges regards it as a collection of components from widely separated periods and claims to discern within it conflicting theological viewpoints derived from the Deuteronomistic historian and the later editor. Similar problems arise in the articles on NT books. That on the Epistle of James concludes that the apostle James was not the author of the book, and the Epistle of Jude is likewise not thought to have been written by the brother of the Lord. On the other hand, the evaluation of James’ theology avoids a misguided pitting of James against Paul with regard to justification and good works. Readers seeking a conservative introduction to the Bible have plenty of good scholarly resources available, and those who want an overview of current opinions will probably also be well advised to look elsewhere.

In spite of these criticisms, there is no doubt that the encyclopedia is an indispensable reference work which will find a place in libraries for many years to come.