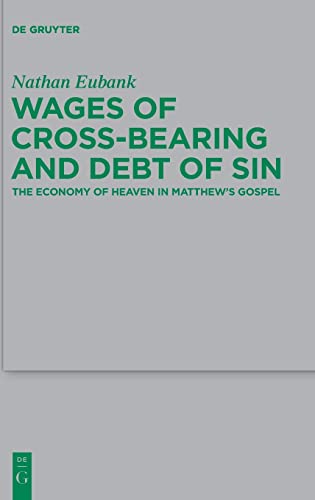 Wages of Cross-Bearing and Debt of Sin: The Economy of Heaven in Matthew’s Gospel

Although many scholars (especially Protestants [myself included]) will find it difficult to accept all of the conclusions advanced in Nathan Eubank’s book, no one can deny that he has certainly produced a well-researched, thought-provoking piece on Matthew’s gospel, which attempts to challenge common assumptions about economic language and divine recompense in relation to the death and resurrection of Jesus Christ and its implications for his followers. As a PhD dissertation written under the supervision of Richard Hays at Duke University, his work exhibits all the qualities of excellent scholarship that one would expect. The recent session dedicated entirely to his monograph at the annual conference of the Society of Biblical Literature (2014) further confirms this fact.

Eubank begins his work by lamenting the absence of an extensive study on “Matthew’s understanding of wages and debts and the import of this language for Matthew’s narrative as a whole” (pp. 1–2), especially in light of the frequent use of economic language in Matthew’s gospel. The need for such a study becomes obvious when three deficiencies in previous works on Matthew’s financial language are recognized: these works (1) focus narrowly on the language of recompense without reference to the rest of the gospel; (2) do not situate recompense in a first-century field of discourse regarding debt and wages; and (3) import a post-Kantian (Protestant?) construal of gift and duty, which inevitably leads to a rejection of recompense for righteous acts. Against these recent tendencies, Eubank situates Matthew’s debt and wage language in its late first-century Jewish context in order to illumine the wider narrative focused on Jesus Christ’s cross-bearing and self-giving life of obedience.

Assuming the cogency of Gary Anderson’s argument in Sin: A History (New Haven: Yale University Press, 2009), that debt and wage correspond to sin and righteousness, Eubank argues that Matthew employs the same economic language idiomatically “to describe how Jesus saves ‘his people from their sin’ (1:21)” (p. 12, emphasis original). Exactly how Jesus does this has left many scholars baffled. Some promote the spatial metaphor of sin as “alienation” or “separation,” while others try to extract something akin to a systematic atonement theory from the gospel. The outcome of both, from Eubank’s perspective, tends to downplay the significance of “atonement” language within the entire narrative and treats Jesus’s saving work and divine recompense for human behavior in abstraction from one another. Paying closer attention to Matthew’s economic language, for Eubank, not only bridges the gap between Christ’s saving work and reward for righteous acts but will also result in a “narrative soteriology” which highlights the significance of the atonement in Matthew’s story (p. 13).

In Chapter 1, Eubank analyzes the economic language of heavenly treasures and debts in extra-biblical literature before the first century (Prov 10:2; 11:4; 19:17 [cf. also 14:21, 31; 28:8]; Sibylline Oracles, Tobit, Sirach, Dan 4:24 [4:27 LXX]; 2 Maccabees), in apocalyptic literature during the first and second centuries (1–2 Enoch; Testament of Abraham; 2 Baruch; 4 Ezra), in Rabbinic literature (Mishnah and Tosefta), and in the earliest Christian literature (Didache, Barnabas, James, Romans, Colossians, and 1 Timothy). After an examination of these texts, he formulates nine conclusions that form the foundation of his overall argument (pp. 50–52):

Having laid the groundwork of debt and wage language in Matthew and his late first-century Jewish-Christian context, Eubank applies his findings to the whole of Matthew’s narrative in Chapters 3–5. When John the Baptist balks at baptizing Jesus, the latter explains that it is necessary to “fill up all righteousness” (3:17, paralleling 20:28: “the Son of Man came not to be served but to serve, and to give his life as a ransom for many”). That is, Jesus fulfills all of God’s righteous requirements, thereby earning a wage or ransom-price, and liberating those languishing under the enormous weight of sin (i.e., debt-bondage). This is further clarified by Jesus’s predictions of his death and resurrection (16:13–28; 19:16–29; 20:17–28). Coupled to each of these predictions is the call for his followers to replicate the same cross-bearing, self-giving obedience exemplified in his impending suffering and death. In so doing, they will be repaid with eternal life. From this, Eubank deduces a particular logic to the divine economy: just as Christ gives his life as a ransom-price for those under debt-bondage, so, too, those who bear the cross of self-giving for the sake of others will receive the same threefold payment Christ received in the passion narratives: eternal life/resurrection (16:24–28; 19:29), participation in the rule of the Son of Man (19:27–28), and the ransom-price for others under captivity to sin. Divine recompense in the life of Jesus is therefore a “foretaste or down-payment of the coming settling of accounts” at the final judgment for believers (p. 209).

There is much to be commended and questioned in Eubank’s book. To begin with, he rightly places his finger on a Post-Kantian (Protestant? Lutheran?) nerve. Although he avoids mentioning Protestants explicitly for the most part, it is obvious that he has some in view, and rightly so. I say some because for other strands of Protestantism his critique will not have as much force. Grace and divine recompense (properly understood) are not irreconcilable. Reward is a biblical means of motivating believers this side of eternity (I think it is legitimate to render μισθός “reward” in places where Eubank prefers “wage” in Matthew’s gospel; see Nicholas Piotrowski’s review of Eubank’s book in JETS 57 [2014]: 816–19). Our works will most certainly play a role at the final judgment, but—admittedly from my theologically-biased perspective—as proof of genuine faith in the work of Christ as the only basis of our salvation. Eubank’s anti-Post-Kantian critique is much appreciated. In the end, though, the overtly Roman Catholic conclusions he derives from this critique are, in my view, difficult to sustain. Of course, to be fair, it would take an entire monograph to defend that claim legitimately.

I also enjoyed the recurring emphasis throughout the book on the vertical and horizontal relationships between God, the believer, and others. But, again, I found it hard to accept the one-to-one correspondence Eubank advocates between God’s act in Christ on behalf of believers and the believer’s act on behalf of others. A distinction needs to be made between Christ’s ransom-price for those in debt-bondage and the giving of ourselves in sacrificial love to others.

Lastly, I wonder how a robust Pauline theology of gift and union with Christ would comport with some of Eubank’s exegetical claims regarding texts in Romans, Colossians, and 1 Timothy. His forthcoming volume on Paul, Charity, and the Poverty of Christ should be telling. I foresee that work creating ripples (if not tidal waves!) of discussion within Pauline studies.

At any rate, his monograph is a clarion call for students and scholars to investigate his well-argued claims about Matthew’s theology of wage and debt, testing them against their own theological framework, and even determining how those claims pan out canonically. Eubank, like Gary Anderson before him, has certainly begun a lively discussion worth engaging.