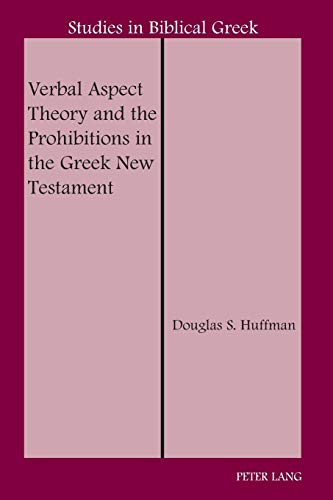 Verbal Aspect and the Prohibitions in the Greek New Testament

Five years ago Peter Lang published Joseph Fantin’s The Greek Imperative Mood in the New Testament: A Cognitive and Communicative Approach and the current contribution by Douglas Huffman complements Fantin’s work. Both investigate how the linguistic concept of verbal aspect informs our understanding of commands and prohibitions in the Greek text of the New Testament and are part of Peter Lang’s Studies in Biblical Greek series.

Verbal Aspect and the Prohibitions is broken into two sections. In part one, “The Great Prohibition Debate” (approximately 120 pages), Huffman argues that verbal aspect explains the differences between the negated present imperative and the negated aorist subjunctive in a more coherent manner than Aktionsart theory does. “The main thesis is that a verbal aspect understanding of these NT prohibition constructions can, in fact, refine and replace the traditional understanding” (p. 5). He is not so concerned about the content of what is prohibited, or the context of the prohibitions, but how these prohibitions are grammatically expressed. In doing so he employs an eclectic approach to verbal aspect theory that combines Stanley Porter, Buist Fanning and Constantine Campbell’s work (pp. 511–12).

In the second section, “All the Prohibitions in the Greek New Testament,” Huffman surveys the ways one could say “Don’t do that” in Koine Greek that do not fit into the typical negated present imperative or negated aorist subjunctive. This section is almost two and a half times longer than the first (about 330 pages). The difference in space dedicated to these two sections is surprising until one notes, as D. A. Carson does, that there are around 260 prohibitions that fit the negated present imperative or negated aorist subjunctive construction but there are almost 1400 prohibitory statements in the NT. The second part of this book collects and categorizes those additional prohibitory statements and is an invaluable contribution in itself.

I would like to suggest that there is a third “section” to this book that deserves equal attention: that is his comprehensive survey of the history of the Aktionsart theory and clear explanation of verbal aspect in reference to prohibitions. This third section bookends his work (chapters 1–3 and the final chapter [14] and appendices A and B). Each of these three sections makes its own distinct contribution to the study of prohibitions.

Chapter 1 surveys the history of the Aktionsart approach. This approach views the negated present imperative as commanding someone to stop what they are currently doing (“stop doing that”) and the negated aorist subjunctive construction as forbidding someone from starting to do something (“don’t start doing that”). While we can speak of an Aktionsart theory, Huffman clearly shows how there are three different models that fall under the Aktionsart rubric. Aktionsart is based on the idea that the kind of historic action determined which verb tense the author used to write about it. Moulton is credited with introducing this German concept into English biblical studies in 1906 from Karl Brugmann’s work (1885). However, Huffman demonstrates that the Aktionsart approach has earlier roots in John Milner’s work from 1734. This is more than just a historical survey. Huffman demonstrates how these 19th century philological approaches influence how contemporary grammarians interpret the NT (see his appendix, “Tracing Aktionsart views of Prohibitions”).

Chapters 2, 3, and 4 are the theoretical backbone of this book. Aktionsart’s general guidelines for interpreting a prohibition according may hold in certain instances but there are too many inconsistencies. This is because the Aktionsart model is based on “the presupposition that the Greek verb tense-form is determined by the historic kind of action that it represents,” and Huffman concludes that Aktionsart approach must “be completely set aside” (p. 58). In chapters 3 & 4 the author demonstrates how verbal aspect theory is able to coherently explain the evidence of the prohibitions without resorting to qualifications or exceptions to the rule. The basic presupposition of verbal aspect theory is that the verb tense-form is not determined by the historic action but the author’s perspective; “the question is how the author wishes to speak about an event” (67). The fourth chapter examines parallel prohibitions in the NT or passages where the negated present or aorist forms are used interchangeably when speaking about the same action. Verbal aspect theory can comprehensively cover these passages where the different authors use different verb tense-forms without appealing to qualifications. A surprising point brought out in this chapter is how English translations of the NT do not follow the Aktionsart model but tend to follow the simpler verbal aspect suggestions to translate the present prohibition along the lines of “do not be doing” and the aorist as “do not do.”

In Part 2 Huffman surveys all the different ways that it is possible to say “don’t do that” in the NT without resorting to a negated present imperative or an aorist subjunctive constructions. This section makes a unique contribution in that, as Huffman notes “as far as we know, no one has attempted to identify in place all the possible NT constructions of prohibitions” (p. 123). Judging from the major sections in chapters 7 through 13, the author identifies 24 different forms of prohibitions in the NT. This section does not attempt to apply verbal aspect theory to these various prohibitions (a feat that he wisely notes would have been beyond the scope of the current work) but is more of a descriptive exercise.

The second part of the book makes such a valuable contribution to the study of the Greek NT that it may have been better as a separate volume in itself to avoid being overlooked as part of the current volume. This section clearly demonstrates that linguistic models that are based on atomistic premises in which the meaning of a grammatical construction is determined by the sum of the semantic meaning of its parts fall short of what we actually find in real-life language use. A simple illustration of this would be that by using the most advanced searches in a software package like Accordance or Logos one would never be able to compile the comprehensive list of prohibitions in the NT as Huffman has. I was struck by two ideas as I worked my way through his list. First, the meaning of the various prohibition constructions cannot be built up from the meaning of the various grammatical elements but they are holistic in nature. Second, many of these prohibition constructions require other theories of language and linguistics to explain their use. Why for example does “Woe to you, scribes and Pharisees” (Matt 23:15, p. 384) count as a prohibition (“do not be hypocrites by corrupting converts”) and not as a judgment against Jesus’s antagonists in the discourse? In this way, his collection of other ways to say “don’t do that” serves as a corpus of linguistic occurrences that hopefully will lead to further studies. In fact the author offers several lines of exploration in ch. 14 “Summary and Prospects.”

After reviewing Fantin’s volume The Greek Imperative Mood in the New Testament (in Them 37.3 [2012]) and now Huffman’s work, I feel deeply indebted to both men’s contribution to our understanding of Koine Greek. I hope that both of these volumes (and hopefully others as well) in Peter Lang’s series will be incorporated into software packages like Accordance and Logos in the near future. The wealth of textual examples and grammatical analysis that both contain makes them ideal texts to be studied and accessed via software.