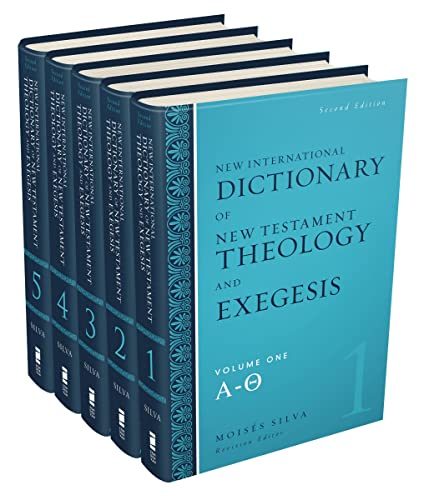 James Barr questioned whether theological dictionaries should even exist. He shrewdly criticized the Theological Dictionary of the New Testament for using “unsystematic and haphazard” linguistic arguments such as irresponsible etymologizing (James Barr, The Semantics of Biblical Language [London: Oxford University Press, 1961]). Should one even attempt to organize a theological dictionary lexically? It is dangerous because it is so easy to commit exegetical fallacies in the process such as “illegitimate totality transfer.”

About fifteen years after Barr’s criticism of TDNT, Zondervan published the New International Dictionary of New Testament Theology. Colin Brown edited this standard reference work (3 vols. from 1975 to 1978 with a fourth volume of indexes in 1986), and evangelical scholars like Gleason Archer, F. F. Bruce, D. A. Carson, Murray J. Harris, I. Howard Marshall, Leon Morris, and J. I. Packer contributed to it. Brown oversaw the massive project of translating, revising, and expanding Theologisches Begriffslexikon zum Neuen Testament (2nd ed.; 2 vols.; 1970–1971), to which over seventy German academics and pastors had contributed.

Four years after the third volume of NIDNTT was released, Moisés Silva, a NT scholar with expertise in linguists and the LXX, reviewed it (WTJ 43 [1981]: 395–99). Silva “warmly recommends this dictionary as a valuable reference tool.” But he concludes that while NIDNTT provides some corrective to TDNT, it still falls short:

In conclusion, anyone who expected this Dictionary to incorporate the results of modern linguistics into the study of the New Testament vocabulary will be deeply disappointed. Someone might again argue that the work was not meant to be a contribution to lexicography as such but to theology (cf. I, 11). If that is really the case, however, why include lexicographic discussions? In fact, why arrange the material according to Greek words at all? Why not simply bring together all the passages that might say something about knowledge, for example, regardless of whether ginōskō or some other word is found in them? This most fundamental criticism of TDNT by James Barr has not been satisfactorily answered. Whatever the valuable features of the present work, we must be clear that it does not mark any substantial advance over the method of TDNT. (p. 399)

If I were to nominate someone to revise the NIDNTT in a linguistically informed way, I can’t think of anyone more qualified than Moisés Silva. So I was delighted to learn that he was serving as the editor of what Zondervan has renamed the New International Dictionary of New Testament Theology and Exegesis (NIDNTTE), the NT-counterpart to NIDOTTE (New International Dictionary of Old Testament Theology and Exegesis, ed. Willem VanGemeren, 5 vols., 1997).

Silva, who completed this revision over eight years, has so extensively rewritten the NIDNTT that articles in his new work do not include the names of individuals who originally contributed articles to NIDNTT. Silva improves this reference work in at least six notable ways: (1) he updates bibliographies; (2) he corrects inaccurate or misleading information; (3) he presents linguistic data from general Greek literature and Jewish literature in a consistent format; (4) he alphabetically organizes Greek words rather than grouping them on the basis of concepts; (5) he describes words and related theological concepts in a more linguistically informed way; and (6) he takes advantage of numerous tools not available in the 1970s such as TLG, Louw-Nida, BDAG, and NETS.

Consider, for example, the article on συνείδησις (4:402–6). Over the last several years, I have read every exegetical and/or theological resource I can find on the conscience, and this concise NIDNTTE article is very good. Like all of the other articles, it has three main parts: (a) General (Greek) Literature features primarily the classical period but also includes preclassical, Hellenistic, and Roman times; (b) Jewish Literature includes the Hebrew OT and LXX, the Pseudepigrapha, Philo, Josephus, Qumran, and rabbinic writings; and (c) New Testament, of course, focuses on the dictionary’s primary text. The article on συνείδησις explains the main debates and nuances (both diachronically and synchronically) and includes some of the most important literature in the bibliography. That is the consistent four-part layout for the nearly 800 entries covering over 3,000 Greek words: (1) general literature, (2) Jewish literature, (3) NT, and (4) bibliography.

A word of warning, however, is appropriate for some readers. Make sure to read the “Introduction” (1:5–14), especially the sections “Theological lexicography” and “Linguistic data” (1:7–12). Silva warns, “Prior meanings, if different from contemporary usage, are irrelevant unless there is reason to believe that the speaker/hearer is aware of them” (1:9). Diachronic information, however valuable for specialist purposes, could confuse some users and tantalize them with tidbits that they may preach or tweet but that really do not fit the use of a given word in a NT passage.

NIDNTTE is available in print, but a reference work like this is far more valuable electronically. For one thing it is massive—3,500 pages spread over 5 volumes. Not exactly a pocket dictionary. But I actually do carry this reference work—along with about 8,400 other books—with me in my pocket just about everywhere I go because I can easily access it on my iPhone with the Logos app. Or on my iPad or computer. And all my highlighting and notes sync across those platforms. Further, the good folks at FaithLife who prepare books for Logos Bible Software add specialized features all throughout the NIDNTTE that connect it with the rest of your library in Logos Bible Software. Integrating a reference work like NIDNTTE is invaluable, especially for Logos’s powerful search engine.

Moisés Silva taught me in his book Biblical Words and Their Meaning: An Introduction to Lexical Semantics to be wary of the many ways scholars can abuse theological lexicography. Silva was the ideal person for the job to revise NIDNTT, and from what I can tell he succeeded. This is definitely a reference work that serious Bible students should own.