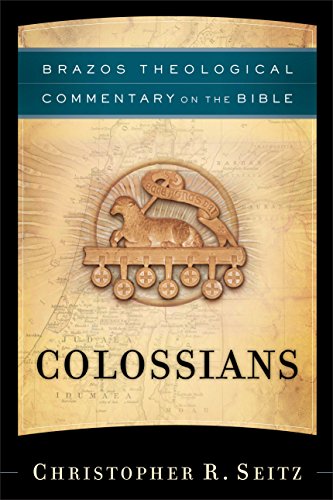 The Brazos Commentary Series is a concrete manifestation of the renewed interest in the so-called “theological interpretation of Scripture”. This movement, which has gained momentum in recent years, was born out of frustration with historical-critical approaches to the Bible that have yielded many interesting insights, but have done so at the cost of abandoning the Bible’s claim to be Scripture and sacrificing any sense of its unity. The series editors seek to rehabilitate the great ecumenical tradition in biblical interpretation, convinced that “dogma clarifies rather than obscures” (p. 11). Thus, they generally call on systematic theologians, rather than biblical scholars, for commentary. In the case of Colossians, however, they turned to Christopher Seitz, professor of biblical interpretation at Wycliffe College, University of Toronto. An OT scholar by training, he is perhaps the most prominent practitioner of “canonical criticism” in the tradition of Brevard Childs, under whom he studied at Yale University.

Canonical criticism is hardly the same thing as the theological interpretation of Scripture, so Seitz’s commentary probably represents something of an outlier in the series. Be that as it may, there can be no doubt that it is certainly different—sometimes strikingly so—from the standard commentaries on Colossians. The results are often as refreshing as an ocean breeze sweeping through a seaside cottage that has been shut up for far too long. When, for instance, Seitz discusses the authorship of Colossians he kowtows neither to the evangelicals’ insistence on Paul as the “sole author,” arguing that this is a modern construction unsuited to the community origins of Scripture, nor to the critics’ sophistic(ated) contortions in their attempts to avoid the plain intent of the text (not to mention the theological and moral implications of the resultant presence of pseudepigraphy in the canon). Instead, he consciously engages Colossians as part of the collection of Pauline letters that from very early on was read and later commented on as a cohesive unit, much like the Minor Prophets compilation that Seitz knows so well (cf. pp. 41–42). By following this tried and true approach, he is able to offer a robust defense of Pauline authorship that would have made sense to the 1st century churches that received it as Scripture. Along the way he makes no apologies to critical scholars for conveying the impression that this pre-Enlightenment stance is eminently reasonable (which, in fact, it is). Seitz puts it nicely: “At some point the canonical portrayal sits before us and requests that we take it seriously as a factor in interpretation” (p. 25).

This laudatory note should not, however, be construed as a blanket affirmation either of Seitz’s method or his conclusions. Anyone familiar with modern Colossians commentaries will be shocked to discover that, whether in the introduction or in his treatment of the relevant texts, Seitz almost completely dispenses with any discussion of the so-called “Colossian Heresy,” the epithet traditionally given to the heterodox teachings that influenced the church in Colossae and that Paul seeks to counter at several places in the letter. This is in part due to his conviction that there was no Colossian heresy in the sense of a single body of teaching (p. 121). He follows Morna Hooker here and falls prey to her mistake. Colossians 2 contains some remarkably specific descriptors of the teaching; somebody was quite clearly teaching something Paul did not agree with. Whether it was a coherent system is another question, one that we cannot answer with any certainty due to our lack (not Paul’s) of information. Seitz does more, however, than simply sound a cautionary note; rather, he seems averse to locating Colossians in its historical context as a matter of principle. “Paul’s frame of reference,” he argues, is the Jewish Scriptures, and that is “far more decisive . . . than seeking to learn what the specifics of religious practice were in the Lycus valley” (p. 121).

If this either/or approach is a necessary consequence of canonical interpretation (it is certainly not a necessary consequence of the theological interpretation of Scripture; commentators going back to the 4th century discussed the nature of the heresy), I do not regard it as a salutary one. To be sure, by highlighting the relationship of Colossians to the other Pauline epistles, Seitz avoids the dreary atomism of critical scholarship, which, it seems, is only adept at pointing out the differences between the various letters. The result has been an endless stream of fruitless discussions regarding what Paul could or could not have written at any given stage of his theological development, discussions which, truth be told, are often embarrassingly uncritical, since their results are unverifiable in any scientific sense. That is not to say, however, that historical criticism is completely without merit. The fact of the matter is that one cannot learn all there is to know about Colossians by reading it in light of the other Pauline epistles. It is, for example, despite its marked affinity with Ephesians, much more deeply rooted in a specific historical context than that (most likely) encyclical letter. Only historical-critical exegesis, not theological interpretation, can help us uncover that context.

Thankfully, we have both Ephesians, a more abstract assessment of the universal and cosmic dimensions of the Gospel, and Colossians, a letter that interacts with a competing cosmology and its resulting ethic and applies the truths of that Gospel to a concrete situation in a specific church. We can be thankful, too, for two complementary methods of interpretation: historical-critical exegesis and canonical criticism. Christopher Seitz’s commentary is a good example of how the latter can illuminate the Scriptures. It would have been an even better contribution if he had not largely dispensed with the former. Still, Seitz’s unique approach coaxes a number of fresh insights from the text and therefore deserves a hearing.