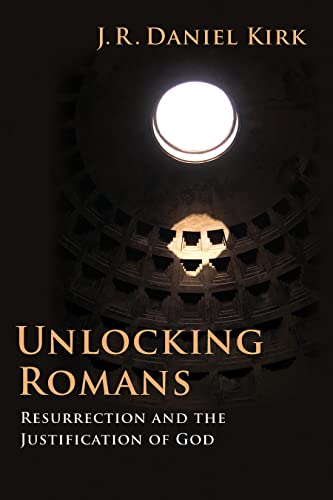 Unlocking Romans: Resurrection and the Justification of God

J. R. Daniel Kirk is assistant professor of New Testament at Fuller Theological Seminary. This book represents a revision of his doctoral thesis under the supervision of R. B. Hays at Duke University. The preface is important because Kirk asserts that the work of three of his former professors exercised a formative influence upon his thinking: R. B. Gaffin, E. P. Sanders, and R. B. Hays. He highlights that his “debt to the exegetical and theological insight of both Profs. Hays and Sanders is evident throughout” (p. x).

The book’s title provides the reader with a helpful tool for remembering the book’s thesis. In Unlocking Romans: Resurrection and the Justification of God, Kirk asserts that the resurrection of Jesus functions as a unique interpretive key for unlocking the book of Romans. Kirk clarifies this claim in the sense that the resurrection serves “to probe Romans in a more coherent manner than can be done using traditional focus points such as justification or union with Christ” (p. 204). He also uses sweeping substitute phrases for the word “key” such as “the focal point of Romans” (p. 217).

The second part of the subtitle reveals the author’s case that Romans is essentially a theodicy. The key issue behind this theodicy is the interpretation of God’s promises to Israel (p. 10). Therefore, if Romans is a theodicy relating to God’s promises to Israel and if the resurrection is “the focal point of Romans” (p. 217), then that begs this question: As the focal point, what role does resurrection play in the theodicy of Romans with regard to God’s promises to Israel? This is his clearest answer: “resurrection is the most pervasive theme of the letter and it functions throughout as a hermeneutical key for reinterpreting the Scriptures and stories of Israel” (p. 8). Therefore, the resurrection “serves the purpose of vindicating God as faithful to Israel despite all appearances” (p. 10). In this way, he claims that his study reaches the same point that Richard B. Hays reached in his reading of Romans: “Paul’s argument is primarily an argument about theodicy, not about soteriology” (p. 216).

This book has both significant strengths and weaknesses. In terms of strengths, Kirk brings the resurrection into clear focus with tenacious consistency. He has a helpful chapter on the various roles that the resurrection concept played in early Judaism followed by chapters devoted to in-depth exegetical discussions of key resurrection passages in Romans. This detailed exegetical approach allows the resurrection refrain to gain a gradual degree of familiarity to the reader. This awareness creates an atmosphere that is conducive for following Paul’s flow of thought. Detecting this unsung theme helps to ensure that it will not continue to suffer from scholarly neglect (cf. p. 11n40).

He also strikes a balance in showing that the resurrection is both a frequent theme (Rom 1:4, 16–17; 4:16–23; 5:9–10, 15–21; 6:1–23; 7:1–6; 8:1–39; 10:1–13; 11:13–15; 13:8–14; 14:1–12; 15:12) and a controlling theme in that it “casts a shadow over the letter that is longer than the particular verses that mention it explicitly” (p. 11). I agree with his assessment that “some of these references are clearer than others” (p. 11). Scholars will continue to question some of them, but the fact of the resurrection’s sheer frequency in Romans is not open to debate. Furthermore, he perceptively contrasts this frequency with the relatively infrequent ways the same theme shows up in somewhat similar letters like Galatians. These strengths stand regardless of one’s conclusion on the precise part the resurrection plays with regard to soteriology or theodicy.

The book also has significant weaknesses. One could question exegetical decisions (like “the one who is righteous by faith” [Rom 1:17] or “the one who has died” [Rom 6:7] as references to Christ, see pp. 47–48; 113) or disagree with points of application (like Protestants asking Catholics for forgiveness in our pursuit of ecclesiological unity, see pp. 233–34). However, perhaps the most perplexing weakness is that he often assumes the New Perspective interpretation of Paul without further discussion. Kirk occasionally refers to dissenting opinions from Moo’s commentary on Romans or Francis Watson, but one looks in vain for detailed interaction with other authors or works like the two volumes on Justification and Variegated Nomism or others of the “Lutheran” Perspective on Paul.

An author needs to ask if his or her view can defend itself in the intellectual coliseum called Pauline studies. Making a successful defense means at a minimum that one must advance counterarguments that accurately assess the strengths and weaknesses of the contrasting perspective. Kirk’s approach seems out of touch at this very point. Have we really moved to a Post-New Perspective era in which dissenting voices are marginalized and ignored and the NPP is assumed? If we have reached such a time, then I apologize for missing the memo.

Therefore, an honest evaluation of this work points in two directions at once. On the one hand, although this work fills a lacuna in Romans studies at one level, it is also difficult to avoid the conclusion that this work falls into the ditch of “one-sided scholarship” at another level.