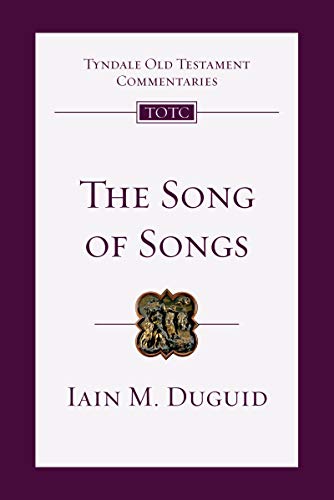 The Song of Songs: An Introduction and Commentary

The release of a new commentary on the Song of Songs is a rare pleasure, but to have two treatments of the Song arrive concurrently is indeed welcome. Both of these volumes address a broad audience, but they take somewhat different approaches to the meaning of the biblical text. Examining the Song through the binocular lenses of Duguid and Hamilton brings into focus the formidable challenges in interpreting the Song.

Iain Duguid, who recently transitioned from Grove City College to Westminster Theological Seminary, has penned the revised volume for the Tyndale Old Testament Commentaries series, which replaces the 1984 volume by G. Lloyd Carr. Duguid provides an excellent introduction, with brief treatments of the title, authorship, date, canonicity, structure, and unity of the Song, and more extended discussions of the interpretational approaches and message of the book. His original translation of the Song is followed for each lyric by his commentary, comprised of one or two paragraphs of context, verse-by-verse exegetical comments, and one to three paragraphs of meaning, including first its literal message and then its broader theological connections.

Duguid concludes that it is not likely that Solomon authored the Song, and it may well have been written after the exile (pp. 25–26). He views the Song as having a lyrical rather than chronological unity, with a logical flow leading into marriage and then the full consummation of the relationship within the bond of marriage (pp. 53–54).

After discussing the major interpretational approaches to the Song, Duguid settles on two broad categories. These are the natural approach, in which the primary significance of the text is human relationships, and the spiritual approach, which combines allegory and typology that find significance in the relationship between God and his people (p. 28). He cautions that both of these approaches can be distorted to misread the text in ways that are not grounded in its exegesis, but rather in the perspective of the interpreter. He contends that the Song is best read as wisdom literature depicting two idealized humans in a relationship that is committed, but necessarily imperfect, because they live in a fallen world (p. 36). The Song, then, points outside of itself in a parabolic way to the need for the perfect relationship that God has provided in Christ. This theological sense lies beyond the text of the Song rather than being derived from within the Song.

Duguid finds several key themes in the Song. He sees it as an idealization of mutual human love as God designed it. In contrast to hedonism, “sex is good and pure within marriage, and is the appropriate object of longing and desire before marriage” (p. 40). In portraying the passionate delight of the couple, “the Song celebrates heterosexual monogamous marriage as the ideal, and shows us the tenderness, excitement and intimacy that rightly belong to that relationship” (p. 47). Human love, however, is not enough, but is an analogy of the relationship between God and his people. The Song points to Christ and the gospel not by bypassing the literal meaning, but by drawing upon the biblical metanarrative that enriches the meaning of the text (p. 51).

James Hamilton is Professor of Biblical Theology at Southern Baptist Theological Seminary and Preaching Pastor at Kenwood Baptist Church of Louisville, Kentucky. His introductory chapter discusses the Song of Songs in biblical theology, and then he treats each of the eight chapters of the Song in turn. In the preface Hamilton indicates that the book grew out of nine sermons he preached in 2012, and his content reflects that origin. In each chapter he briefly touches on the need met, the main point, and the context of the text, and then he provides a homiletical discussion of the passage, only rarely citing or interacting with commentaries, before finishing with a conclusion and questions for discussion.

In his introduction, Hamilton states that his understanding of the Song builds upon John Sailhamer’s position (“The Messiah and the Hebrew Bible,” JETS 44 [2001]: 5–23) that the whole of the OT was written to provoke and sustain a messianic hope (p. 11). He argues that the author is King Solomon, and that “Solomon intended his audience to see not only human love in the Song but also a typified Messiah and an allegorical correspondence with the relationship between God and His people” (p. 32, Hamilton’s emphasis). Although he does not fully develop his rationale in this commentary, he points the reader to an earlier article (“The Messianic Music of the Song of Songs: A Non-Allegorical Interpretation,” WTJ 68 [2006]: 331–45). In that essay, Hamilton contends that in Luke 24:27, 44–45 the NT interprets the whole of the OT messianically (p. 334), so when the Song is read in its canonical context it proves to be an exposition of the messianic motif (p. 332). This, then, is not additional allegorical understanding, but it is the historical meaning intended by the author, Solomon (p. 339). In asserting his position, Hamilton acknowledges that he has found no one else who argues that the Song was intended as a messianic document (p. 331).

These two commentaries arrived as I was beginning my lectures on the Song of Songs in my course on OT Wisdom Literature. Reading them together and in conjunction with my own research on the Song has clarified in my mind several salient questions that must be asked and considered carefully.

First, how does the poetic genre of the Song affect how it is read and interpreted? Duguid views poetry as condensed, evocative language that is “designed to leave the reader pondering its implications” (p. 24), while Hamilton claims that as poetry the Song is written with multiple layers of interpretation (pp. 18, 29). Alternatively, it can also be argued that the distinguishing quality of poetry is its endeavor to recreate the experience of the author in the reader, rather than merely reporting the experience, as does prose.

Second, to what extent is the Song related to wisdom, and how does that affect how Solomon is construed? Duguid explicitly describes the Song as wisdom literature (pp. 34–37, with specific textual links to Prov 5:18–20), whereas Hamilton presents Solomon as a royal figure, which fits better his emphasis on messianic expectations, rather than as the exemplar of wisdom, as Solomon is portrayed in Proverbs, Ecclesiastes, and 1 Kings.

Third, is the theological sense of the Song part, or even the main part, of its intended meaning (Hamilton), or is it better viewed as a theological supplement derived from what is taught explicitly in the NT (Duguid)?

Fourth, what bearing does Luke 24:27, 44–45 have on the interpretation of the Song? In his WTJ article, Hamilton argues from this text that the NT interprets the whole [his emphasis] of the OT messianically. However, to say that all of the OT Scriptures, including the Law of Moses, the Prophets, and the Psalms, speak of Christ is not precisely the same as claiming that every text within the OT is intended to be read messianically. For example, a political candidate might say truthfully that he is supported by people from every state, without meaning that every person in every state is in his camp.

These two treatments of the Song of Songs have somewhat different target audiences, with Duguid pitched to seminary students and pastors, and Hamilton intended for laypeople and discussion groups. Nevertheless, both of these commentaries will keep this important text of the Bible before the people of God, helping them to study it, to probe its meaning, and to live in its light. Through the Song’s teaching, reproof, correction, and training they will become more thoroughly equipped for every good work.