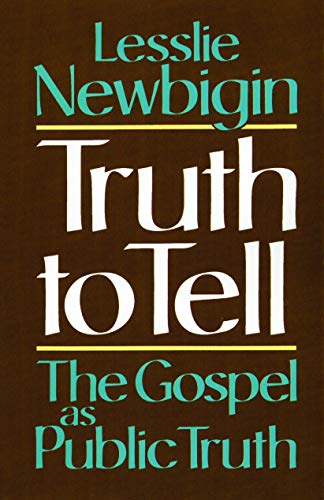 Truth to Tell: The Gospel as Public Truth

Lesslie Newbigin is required reading for those concerned with the relation of the Christian gospel to contemporary Western culture—hence required reading for all of us. In a trilogy of works, The Other Side of 1984, Foolishness to the Greeks and The Gospel in a Pluralist Society, Bishop Newbigin has pitted the gospel as public truth against the prevailing culture and proclaimed it for the secular world. So the title of this present volume announces continuity and not novelty in his concerns, while its sub-title gave its theme to a major conference held in England in the summer of 1992.

Three lectures comprise the material in this book. The first calls for an initiative in cultural renewal comparable to that taken by Augustine in the days of Classical decay. We must start not, fatally, with Descartes and the knowing mind as the instrument of certainty (that led to subjectivism and even to atheism) but, uncompromisingly, with the gospel and its given truth as the basis of mission (which leads to objectivity without closing the mind). The second calls for a committed pluralism, a paradigm of truthfulness as affirmation and inquiry together. With massive injection of aid from Michael Polanyi, Lesslie Newbigin combats here the alternative falsehoods of liberalism (false subjectivism) and fundamentalism (false objectivism). The resolution is a proper integration of personal responsibility with objective knowing. In the last lecture, the author again fights on two fronts in his desire to ‘speak the truth to Caesar’—the reductionism, on the one hand, and the irrelevance, on the other, of much gospel proclamation. The church must unmask ideologies, guarding against the production of her own. Bishop Newbigin lays great stress here on the importance both of the local congregation and of its representation of the church universal. He urges the training of laity in leadership that is faithful to Christ in the public arena. The truth of Christ is the Alpha and the Omega of this contribution.

Setting aside the familiarity of most of this for those who know the previous work, this volume is indeed welcome. The word ‘prophetic’ can be bandied around promiscuously these days. But surely in Lesslie Newbigin’s work, we have the genuine article: passion and strength of speech and conviction … truth, too, without which they would be in vain. One may have reservations, for example on his peeping predilection for Lindbeck’s celebrated brand of narrative theology and his advocacy of Wink’s position on the Pauline ‘powers’. Yet any disagreement here little affects the importance of the thesis that aspires to join public truth and responsibility with inquiry and openness. The argument requires far more extensive defence than the author can give it in this particular volume, but that is partly offered elsewhere and partly a matter for ongoing work.

Just one word of caution, however. Descartes gets the stick very heavily, especially for re-enacting the fall in his substitution of human certitude for divine gift. But before and behind Descartes, a powerful current of humanism was beginning to erode the faith received, and its flow and force arguably formed an alternative stream of modernity to that of Cartesian thought. Lesslie Newbigin glimpsed this possibility at the start of his immediately previous work but does not follow it through. This is not just a matter of historical interest, for historical diagnosis influences contemporary remedy. And yet Bishop Newbigin still seems to me in general pretty near the mark on both counts. For this he is to be both thanked and heeded.