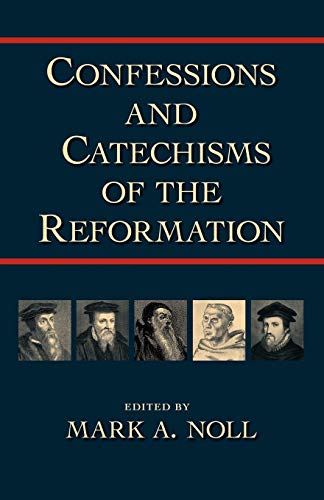 Confessions and Catechisms of the Reformation

This volume contains a selection of confessions and catechisms which were composed during the 16th century: Luther’s Ninety-Five Theses and Small Catechism; Zwingli’s Sixty-Seven Articles; the Anabaptists’ Schleitheim Confession; the Augsburg Confession; the Genevan Confession; the Heidelburg Catechism; various Tridentine decrees; and the Anglican Thirty-Nine Articles. In addition to these texts, Professor Noll has included a general introduction on the history and purpose of confessions and catechisms, brief historical introductions to each document, and bibliographies listing related works in English.

Professor Noll has borrowed the texts and translations from other books, and so he breaks no new ground in this context. However, it is most helpful to have all of these confessions and catechisms gathered together in a single volume. This juxtaposition of statements of belief from such a broad cross-section of Christian tradition enables the reader to discern something of the range and emphases of 16th-century religious thought. It is particularly pleasing to note the inclusion of documents from the Council of Trent. This will undoubtedly help readers from a non-Catholic background to develop a more accurate understanding of Rome’s historic position on key doctrines such as justification and the mass. Furthermore, in order to dispel the popular Protestant misconception that the Counter-Reformation church paid no attention to Scripture, Professor Noll has also included the Scripture references cited by Trent to justify its doctrinal statements. In the present climate of ecumenical debate, these documents are required reading by all thinking Christians.

It is perhaps surprising that Professor Noll chose to include the Genevan Confession while omitting other documents. On page 22, the author himself admits that this document did not have the importance of Calvin’s catechisms, or the Scot’s Confession. Considering this admission, along with the central importance of Calvin to the development of Reformed theology, it is strange that Professor Noll chose a relatively minor confession as representative of the thought of Reformation Geneva. Nevertheless, this criticism should not detract from what is an almost unexceptionable selection of texts.

Those who have studied the Reformation will find little with which they are not already familiar in Professor Noll’s introductions to specific texts. However, these introductions provide enough historical detail to enable the general reader and the novice to understand something of each document’s historical context and distinctive doctrinal position. On page 213, for example, Professor Noll highlights the hybrid nature of the Anglican Articles, pointing to both Lutheran and Reformed aspects of their doctrine. However, these ‘pointers’ are not intended to be exhaustive, as is clear in the above example from Professor Noll’s failure to include the Anglican concept of the eucharist, as embodied in Article 28, in his list of Reformed doctrines. Nevertheless, the succinct clarity of the introductions, coupled with the bibliographies of secondary works in English, make the book an excellent aid both to teachers and to students of Reformation thought.

Professor Noll’s most important personal contribution is the general introduction at the start of the book. Here he transcends mere historical considerations and attempts to point the reader to the religious significance of confessions, and to their relevance for today. In doing so, he touches on areas of great importance for the contemporary church. For example, he stresses that all human summaries of doctrine are time-bound documents and therefore of less authority than Scripture. However, on page 19 he notes that in many churches it is unthinkable to challenge any statement enshrined within the denomination’s confessional standard. This is a most relevant criticism. While evangelical churches regard confessions as theoretically subordinate to Scripture, in practice these subordinate standards frequently hold an unassailable authority and displace Scripture as the normative principle for the evaluation of doctrine. If this book, by highlighting the historical differences within evangelical Protestantism, provokes critical but constructive thought concerning the relationship between scriptural and confessional authority, it will have fulfilled a most useful purpose.

With its broad range of documents, its English bibliographies and its helpful introductions, this book should be welcomed by student, teacher and general reader alike. It is an excellent introduction to 16th-century religious thought, with relevance beyond the classroom.