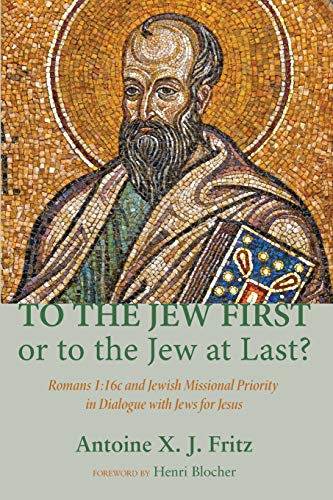 To the Jew First or to the Jew at Last? Romans 1:16c and Jewish Missional Priority in Dialogue with Jews for Jesus

This book is a critique of a missiological principle informing the beliefs and practice of the organisation Jews for Jesus (JFJ). This principle is that the church today must “prioritize evangelizing Jews over Gentiles” (p. xxxix). The idea is based on an interpretation of the phrase “to the Jew first, and also to the Greek” (Romans 1:16c). Fritz, who worked as Office Manager of the Paris Branch of JFJ from 2003 to 2009, labels this interpretation of Romans 1:16c “[Jewish] Missional Priority” (MP). He distinguishes it from two other possible understandings of the passage, “Historical Priority” (HP)—i.e. the simple acknowledgement that the gospel was preached to Jews first as indisputable historical precedence—and “Historico-Covenantal Priority” (HCP)—i.e. the further acknowledgement that this first-century historical pattern was grounded in God’s covenant with the nation of Israel. While for Fritz HP and HCP are limited in their application to the first century, MP maintains that the church’s mission today must, wherever practicable, give priority to Jewish evangelism. Fritz’s critique of MP in favour of HCP is friendly, yet thoroughgoing.

In Part I, Wirkungsgeschichte, Fritz traces the interpretation and the impact of Romans 1:16c from the early church through the medieval period and the Reformation up to modernity. Fritz’s work here is an original and valuable contribution to the understanding of historic Christian attitudes towards Jewish evangelism. He finds that the MP interpretation of Romans 1:16c is a relatively recent phenomenon. Although the church’s attitudes to Jewish people throughout history have varied considerably—sometimes positive, sometimes tragically negative—a strong MP interpretation cannot be found before the early nineteenth century. It first appears in a report of the London Society for Promoting Christianity Amongst the Jews (1809) (p. 28). From then on it has gained great popularity in a number of circles, especially among Dispensationalists and American Zionists, and in particular JFJ (see also pp. 177–82).

In Part II, Status Quaestionis, Fritz gathers and critically surveys the main arguments put forward for the MP interpretation, particularly by those associated with JFJ. These arguments include but are not limited to: the idea that the Abrahamic covenant gives the Jewish people a special ongoing role to bless the world or to be a light to the Gentiles; the pattern in Acts, in which Paul went first to the Jews; the view that those who bless Jews will be blessed by God; an eschatological expectation that “it is the mission of the Jewish people to become the greatest evangelists ever seen” (p. 82); and a pragmatic contention that without MP we will neglect Jewish evangelism entirely. Although Fritz’s argument in this section is sometimes a little hard to follow (it is difficult in places to discern where he is summarising others and where he is stating his own views), it is nevertheless original, enlightening, and largely persuasive. Fritz demonstrates that many of the arguments put forward by JFJ to support the MP interpretation are either invalid, or support the HCP interpretation better (e.g., pp. 69–70). He also demonstrates that many proponents of this MP interpretation are themselves inconsistent in their application of its principles (e.g., pp. 74, 97).

In Part III, Propositio, Fritz offers a detailed exegesis of Romans 1:16–17, especially the phrase, “to the Jew first, and also to the Greek” (v. 16c). He demonstrates that the MP interpretation of this phrase advocated by JFJ is exegetically unsustainable. Paul’s main purpose was not to appeal to his readers to evangelize Jewish people first, but rather to assert the truth that God’s actions through Israel—fulfilling his covenant with Abraham by the death and resurrection of the Messiah—had worldwide implications. The most interesting and possibility-laden element of Fritz’s exegesis is his linking of the term “first” (prōton) in 1:16 with the use of the term later in Romans 3:1–2 (also 2:9–10). Thus, “the privilege of the Jewish people lies in the fact that they have been entrusted with the oracles of God; the idea of a priority regarding evangelism is not the point of 1:16” (pp. 132–133, cf. p. 136).

In Part IV, Heilsgeschichte, Fritz examines the implications of the salvation-historical teaching of Romans 9–11. He argues that Romans 9–11 is not about evangelism to Jews. For example: Romans 10:14–15 is speaking about a universal mission to all people rather than a specific mission to Israel; the motif of “provoking to jealousy” in Romans 11:11–15 is more a stimulus to Gentile evangelism than to Jewish evangelism; Romans 11:25–32 is describing a future great Jewish revival coinciding with the return of Christ (not all readers will agree with every detail of the eschatological schema, including myself, p. 161). Connected with this, Fritz also adds a stimulating discussion about the connection between Paul’s salvation-historical teaching and Jesus’s statements about or allusions to the concept of the “first” being “last” and vice versa.

Thus for Fritz, the statements about Jewish priority in Romans are more about the past (Rom 1:16) and eschatological future (Rom 11) of God’s salvation-historical plan, rather than the present. The “first” of Romans 1:16c does not refer to an ongoing Jewish MP, but rather to a HCP which was only applicable to the situation before AD 70.

I found Fritz’s critique of the strong MP advocated by JFJ largely persuasive. Fritz advocates for a “balanced” position in which Jewish evangelism is encouraged but only in the context of the priority of mission to all unreached people groups (pp. 192–97). On reflection, however, I did wonder whether the HCP interpretation of Romans 1:16c may still have other, unexplored, practical implications for the present, particularly for those who do not share all the details of Fritz’s future-oriented interpretation of Romans 11:25–32. Indeed, it would be interesting to investigate further how Fritz’s suggestion that “we need to preach the gospel to the Jewish people today because of the remnant, and we need to be prepared for this Jewish revival” (p. 169) might inform how we share the gospel with Jewish people today. In any case, Fritz’s book is highly recommended as a cordial and cogent engagement with an important missiological question.