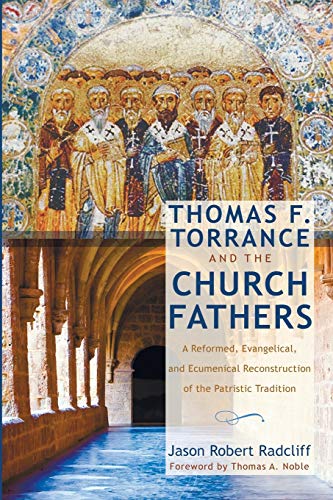 Thomas F. Torrance and the Church Fathers: A Reformed, Evangelical and Ecumenical Reconstruction of the Patristic Tradition

T. F. Torrance loved the church fathers, especially Athanasius. His works include a number of detailed studies on patristic thought, focusing on such themes as the doctrine of grace and biblical hermeneutics. Citations of the fathers also pervade his constructive theological writings, bringing patristic wisdom to bear on matters as diverse as epistemology, modern science, and ecumenical dialogue. Perhaps the crown jewel of the Torrance corpus, The Trinitarian Faith (Edinburgh: T&T Clark, 1988), written after his retirement from the University of Edinburgh, provides an extensive treatment of the doctrine of God in the thought of the church fathers. Torrance’s entire career testifies to the fact that he immersed his thinking and writing in patristic theology.

A careful study of Torrance’s theological relationship with the church fathers has been much needed, but the task has been daunting, requiring a thorough command not only of Torrance’s thought but also of a vast landscape of patristic literature. Jason Robert Radcliff has risen admirably to the challenge in this volume, based on his 2013 doctoral dissertation at the University of Edinburgh. The result is an accessible, engaging, and well-researched resource that will be of benefit to scholars of Torrance and patristic theology alike.

Radcliff observes that Torrance’s account of patristic theology is often overlooked by scholars or simply dismissed as an anachronistic misinterpretation. As such, it has not received the recognition that it deserves as a project of theological reconstruction and ecumenical rapprochement. Torrance did not seek to produce a work of church history or historical theology, but rather a beneficial theological conversation between traditions separated by time but united in their faithful witness to Christ. He offers, in short, a reading of the church fathers shaped by the commitments and interests of Reformed evangelical theology. As Radcliff puts it, “Torrance interprets The Fathers as a theologian and a dogmatician rather than as a patrologist.” This means that Torrance is able to offer new insights into patristic theology “by bringing fresh questions to The Fathers and attempting to imaginatively reconstruct their answers in order to explore their relevance in his own theological context” (p. 56).

To demonstrate the helpfulness of Torrance’s lifelong reconstructive project, Radcliff compares it to past and present interpretations of patristic thought. In the first chapter (pp. 1–24), Radcliff presents a historical overview of past Roman Catholic, Eastern Orthodox, and Protestant readings of the consensus patrum, the theological tradition common to the church fathers. He argues that the Reformed tradition since the mid-twentieth century has for the most part ignored the church fathers, a symptom of both liberal ambivalence toward early church teachings and of fundamentalist biblicism.

However, the church fathers are currently being rediscovered, as Radcliff notes in the second chapter (pp. 25–53). Radcliff observes that many young evangelicals are converting to the ancient traditions of Roman Catholicism and Eastern Orthodoxy, particularly due to appealing counter-cultural elements such as the liturgy, sacramentalism, and monasticism (p. 31). He argues that such conversions are unnecessary, and that they are unfortunately grounded in a false notion of an ecclesial “golden age” which must be repristinated, as well as in the mistaken view of the converts that it is “impossible to retrieve the life and work of The Fathers within their own Protestant traditions” (p. 38). In contrast to these converts, Torrance does not identify the substance of the Christian faith so inextricably with ecclesial culture, and thus enjoys the riches of patristic theology from within the evangelical tradition.

Radcliff also analyzes the use of the fathers in the emerging church movement, which “often misunderstands them completely,” for “rather than allowing the ideas of the classical Fathers to guide them, the emergent church is basically guided by their own eclecticism and idiosyncrasy” (p. 44). Lastly, Radcliff mentions the approach of paleo-orthodoxy, which reads “Western, Protestant, Augustinian theology back into Fathers who were not always Western, Protestant, or Augustinian,” whereas Torrance attempts to read the fathers “on their own terms” from within his Reformed evangelical theological context (p. 49).

In the third and fourth chapters, Radcliff turns to Torrance’s unique version of the consensus patrum. In chapter 3 (pp. 54–111), he notes that Torrance attempts to “indwell” the writings of the church fathers, in order that their biblical reasoning may become his own. Torrance then attempts to apply their reasoning to dogmatics. Radcliff refers primarily to The Trinitarian Faith throughout the chapter as it is the mature product of this indwelling (p. 57). In brief, summarizing sections Radcliff explores Torrance’s patristic reasoning regarding a wide variety of theological themes and fields, including Trinitarian theology, Christology, pneumatology, ecclesiology, sacramentology, asceticism, and epistemology. Radcliff rightly identifies the core principle of Torrance’s consensus patrum as the concept of homoousion, which Torrance uses to reconstruct and deepen the solus Christus affirmation of the Protestant Reformers. The Son who is one substance with the Father is alone the true incarnate revelation of who God is in eternity, and truly acts as God reconciling human beings to himself (pp. 66–70).

Chapter 4 (pp. 112- 158) analyzes Torrance’s view of differing streams of thought that run through church history. Centrally important is the “evangelical stream,” which features theologians and movements that “best captured the inner structure of the Gospel” (p. 114). This stream primarily belongs to the Nicene and Reformed traditions, as well as to Karl Barth, who inherited both and synthesized them, bringing “the Trinity back to the forefront of theology and so returning modern theology to classical theology” (p. 117). Other streams, such as Augustinianism, present dualist conceptions of cosmology, epistemology, and soteriology that must be confronted and corrected, according to Torrance.

The final chapter (pp. 159–181) explores the ecumenical purchase of Torrance’s consensus patrum, particularly in relation to Torrance’s involvement in dialogue between Reformed and Eastern Orthodox churches. Radcliff argues that “the most unique element of Torrance is that he remains decisively Reformed while objectively appropriating the Greek Fathers” (p. 178). As such he stands as an example of a theologian who is robustly Reformed, catholic, and ecumenical in thought.

In the book’s conclusion (pp. 182–99), Radcliff recommends that evangelicals appropriate and continue Torrance’s reconstructive project. However, certain elements of the project should be dropped. One such element is Torrance’s constant search for problematic dualisms in Christianity, which causes him to over-simplify and reject out of hand certain thinkers and traditions (p. 193). Another is his lack of interaction with secondary texts on patristic theology, and thus his lack of transparency “about his filters for reading The Fathers” (p. 194). Radcliff is correct on both these counts.

In summary, this volume presents an excellent analysis of Torrance’s thought and wise encouragement to drink deeply of the well of past tradition.