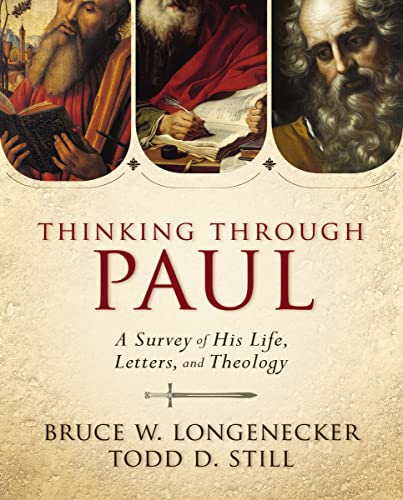 Thinking Through Paul: A Survey of His Life, Letters, and Theology

Thinking Through Paul is written for classroom use and contains many additional resources besides the book alone (a DVD overview, instructor’s manual, sample exams and syllabi, etc.). The focus of this review will be the overall character of the book as well as contested areas in Pauline interpretation and issues of particular note for evangelical readers.

Part 1 (ch. 1) is a survey of Paul’s life insofar as we learn of it from his letters and Acts. This chapter does a good job summarizing the textual details without getting bogged down in detailed scholarly debates about chronology. While the authors typically find Paul and Acts to be reliable, they do not operate under the assumption that these texts are without error (e.g., comments on Acts 22:3 on p. 26).

Part 2 (chs. 2–10) surveys each of Paul’s 13 canonical letters. The authors’ goal is to situate all of Paul’s letters in their historical and social contexts and to provide the reader with a general overview of each letter. The majority of the material in these chapters is more or less a summary of the content of Paul’s letters, presented in a fairly neutral fashion. The authors do not attempt to interact exhaustively with debates about special introduction (author, date, addressees, etc.).

Some conclusions the authors reach on the most heavily debated issues in Pauline studies are as follows:

Part 3 (chs. 11–13) is devoted to theological synthesis. The authors, employing the categories of J. C. Beker, conclude that apocalyptic deliverance in Christ is the major theme that gives coherence to Paul’s letters, while also emphasizing that Paul’s thought remains situational and contingent (pp. 299–304). The last issue discussed in the book is the nature of moral reasoning and decision-making in Paul’s letters. The authors maintain that self-giving love (patterned on that of Christ himself) is key. The actual ethical decisions one makes must flow out of this basic attitude.

Thinking Through Paul (and its accompanying materials) is a well-designed resource. It does a good job of summarizing Paul’s letters and introducing students to their historical and cultural background. It is not, however, a book that evangelicals committed to a classic Protestant view of scripture will likely want to use as a textbook without substantial qualifications regarding its understanding of pseudonymity, inerrancy, etc.