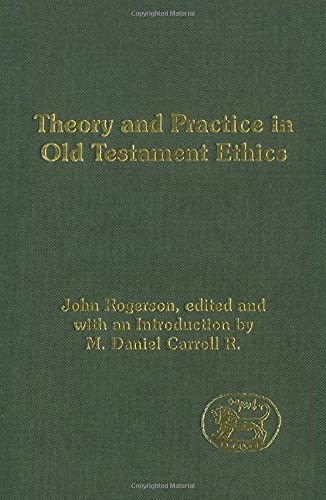 Those who are interested in the use of the OT in ethics will find themselves stimulated, challenged and occasionally disturbed by this collection of John Rogerson’s essays which were brought together by M. Daniel Carroll R., who also added an excellent introduction to the work of Rogerson. As the compendium makes clear, Rogerson is convinced that the OT remains relevant for moral discourse, even if he adamantly rejects its use as a source of laws that should be enforced upon society (15, 17, 20). From his perspective, the OT is most helpful for ethics when viewed as ‘the way of example rather than precept’ (28). Although he admits that the Bible contains some imperatives ‘that have a validity that transcends time and culture’ (27), many readers will be disturbed that he finds much of its teaching has been superseded and even more troubled by his view that the ancient Isralites were sometimes wrong about what they believed God wanted them to do (92). These troubling issues aside, there is much of benefit here.

The book is divided into four parts: (1) ‘The Old Testament as a Source for Christian Ethics’, which demonstrates the author’s methodological concerns about using the OT in ethics; (2) ‘The Contribution of Philosophical Ethics to the Study of Old Testament Ethics’, which reveals his interdisciplinary approach which makes use of anthropology, social theory, and moral philosophy; (3) ‘The Relevance of the Old Testament for Modern Social Issues’, which addresses a series of ethical issues (e.g., nuclear disarmament, abortion, work and unemployment, welfare, enemies, and the family); and (4) ‘Old Testament Ethics and Christian Faith’, which indicates his conviction that faith is not merely personal, but should be lived out in order to impact society.

Although Rogerson insists that OT ethics should be grounded in Scripture, he willingly converses with moral philosophers to make better sense of Israel’s ethical experience and apply it to our age. A. D. Lindsay gave him the concept of ‘the morality of my situation’ and the ‘morality of grace’. From N. H. G. Robinson he learned of ‘natural morality’ which corresponds to Lindsay’s ‘morality of my situation’. Jurgen Habermas provided him with discourse ethics, a discipline that Rogerson believes provides answers for the most important ethical question, ‘What does it mean to be human?’. He thus identifies OT ethical statements as examples of ‘natural morality’, ‘a moral consensus common to sensitive and thoughtful people, religious and non-religious alike’ (16) that ‘will differ in societies according to time and place’ (145). Since this comprises the basic ethical standards acknowledged by a given society, Christians should generally live in accordance with it (so that it becomes the ‘morality of my station’). However, since it is flawed and constantly in flux, believers will also engage it critically and confront it with the ‘morality of grace’, the perfect expression of Christian love that will at times lead to a rejection and an attempt to change the accepted ethical standard. Discourse ethics is then used to root this endeavour in biblical teaching designed to change behaviour positively in an open discussion between all parties involved so that changes comes through agreement rather than imposition (62–63).

It is clear that the author does not just talk about morel practice, but lives out what he believes. For him OT ethics is not purely descriptive, but is something that should be applied to our lives and world. We are similarly challenged to be as careful in our use of Scripture as he is, allowing it to say what it wants to say about topics that were of interest to its first readers, ensuring that we do not read our personal position about particular ethical issues into texts intended to focus on other issues, and refusing to force Scripture to address every modern moral quandary. The book is thus a commendable addition to the growing literature on OT ethics.