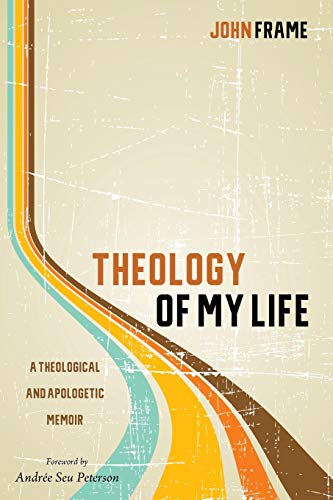 Theology of My Life: A Theological and Apologetic Memoir

Theology of My Life: A Theological and Apologetic Memoir by John Frame is a principled, historical, theological apologetic and reflective piece, designed to show, among other things, a window into the life and theology of John Frame. “Like many in their later years,” says Frame, “I have spent some time, perhaps too much, mulling over the course of my past life” (p. xvii). Consequently, Frame’s memoirs humanize one of evangelicalism’s finest theologians and apologists, giving them value for present-day Christians. Frame intentionally wrote this book to serve both as an “autobiographical apologetic” and “autobiographical theology” (p. xviii). He pioneers this existential perspective of apologetics to share with his readers both the events of his life and the thinking that led him to faith in Christ (p. xviii). Frame hopes “that the theology of this book, as well as the apologetic, will carry some exemplary value for younger theologians, and for all Christians, since on [his] understanding every believer is a theologian” (p. xviii).

Frame’s book contains nine chapters, each one designed to discuss key time periods throughout his life. In the first two chapters, Frame discusses his early years, family, conversion, and grade school experiences. In chapters three through five, Frame reflects upon his college and seminary education at Princeton, Westminster, and Yale. He, then, concludes his book by discussing his professional career at Westminster (East and West) and Reformed Theological Seminary. Unlike some memoirs, Frame provides a helpful summary of ten themes and chief lessons God taught him throughout his life (pp. 215–16). For example, some of the lordship themes related to his academic career include:

Evangelicalism in every generation finds itself at a crossroads between obedience and disobedience. Frame’s themes naturally raise the question: Will the future of evangelical scholarship allow the lordship of Jesus Christ and consistent biblical orthodoxy to set the criterion and parameters of our academic study and intellectual life? Many theologians within the scholarly community feel a constant pressure to allow the academy to set the parameters and conditions of evangelical theology. Frame’s life and publications serve as examples of engagement at the highest academic level by one who remained faithful to the lordship of Jesus Christ.

Frame’s conversion taught him that belief in God and in Jesus as Lord and Savior was accepted as basic (in the philosophical sense of the term). From the beginning of his life as a disciple, Frame was convinced of the “utter centrality of the lordship of Christ over all his life” (p. 12). Frame states in clear terms the effect his conversion had upon his professional career. “I offend people,” says Frame, “not by my beliefs as such, but by my ‘fanaticism.’ Later I would write a series of four big books called The Theology of Lordship. It all began in my early teens” (p. 13). Frame also informs his readers what the academic life of a Christian ought to be like, claiming, “Thus, a Christian is not one who sets up a group of intellectual criteria and then decides whether Jesus measures up to them. Rather, he or she is first loyal to Jesus and then tests all intellectual criteria to find which of them measures up to Jesus” (p. 12).

Despite the height of his passion, Frame’s zeal for the lordship of Christ did not shield him from personal and academic hardship and opposition. Frame admits to struggling with the intellectual appeal from relativism and humanism (p. 23). He claims, “My head was going back and forth between the hard-edged Calvinism of John Gerstner and the ‘everyone-get-along’ humanism of my [high] school. So I was an easy target for what I would later describe as theological liberalism” (p. 23). Frame also talks about his time at Yale University and his studies under Paul Holmer. On a positive note, Holmer was “happy” to have the opportunity to work with an evangelical student. On the other hand, “He was not initially enthusiastic about my view of biblical inerrancy. (Somewhere in his writings he refers to infallibility and inerrancy as nonsensical claims)” (p. 81). Frame’s own life illustrates best the existential perspective one must face to affirm the lordship of Jesus Christ in the academy. He could have easily jettisoned his belief in biblical inerrancy to please his advisor. However, Frame allowed his lordship theology to determine the parameters of his intellectual pursuits, instead of vice versa.

This memoir ultimately raises the question: What does Theology of My Life teach Christians about the function of evangelical theology and apologetics in the 21st century? First, conversion and regeneration are shown to be necessary to achieve any meaningful and consistent evangelical theology. Second, evangelicals can remain “creative within the bounds of orthodoxy.” A place remains for innovation and progress in academic theology; however, each of these pursuits must be tempered by orthodoxy. Third, the presuppositions and axioms of the Christian worldview must set the criterion of our apologetic endeavor. Christians are not called to defend a “minimalistic” view of the Christian faith. Rather, they are to present the fullness of Christianity before the watching world. Finally, Frame illustrates that one can be both an academic and a churchman. Evangelicals are not required to abandon their commitment to the local church and its doctrines to engage the academy. However, at the end of the day, if these two areas come into conflict, evangelicals must first and foremost desire to find their place at the Lord’s table, measured by the lordship of Jesus Christ.