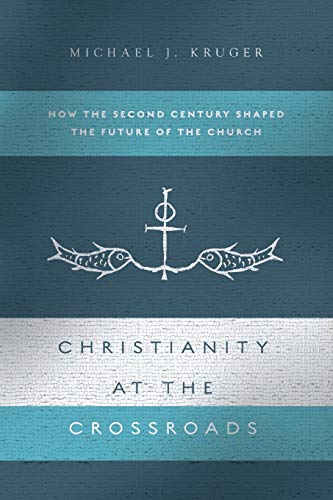 Christianity at the Crossroads: How the Second Century Shaped the Future of the Church

Michael J. Kruger’s Christianity at the Crossroads joins a host of recent publications examining the early centuries of the church. In this thorough and readable introduction to Christianity in the second century, Kruger convincingly argues for an increase in scholarly attention commensurate to the significance of the era in Christian history (p. 2).

Kruger describes his approach in this book as an introductory approach rather than exhaustive, arranged topically, and having a “balance between primary and secondary sources” (pp. 9–10). Kruger does not paint an oversimplified image of the second-century church. Rather, he introduces the reader to the diversity of the Church in that period, while interacting with the breadth of modern scholarship dealing with that period. While he often backs away from dealing with issues in depth, he still highlights important debates and provides resources for further study.

Chapter one looks at the sociological make-up of the church, using Paul’s description in Galatians 3:28—neither Jew nor Greek, slave nor free, male nor female—as a framework to discuss the separation of Christianity from Judaism and the increasing number of Gentile adherents, the socio-economic diversification within the church, and the role of women in the church.

Chapter two focuses on the opposition faced by the church, both politically—with state-sanctioned persecution such as that described in Pliny the Younger’s letter to Trajan (pp. 41–45)—and intellectually, as the leading thinkers of the day took aim at the church. This context of persecution and opposition combined with Christianity’s growing numbers to necessitate the Church’s engagement with the surrounding culture and the consequent influx of Christian apologists.

In Chapter three, Kruger considers the ecclesiology of the second-century church, discussing the leadership, structure, and worship. This chapter highlights the continuities between the second-century Church and the previous generation, particularly in the elements of worship: gathering in private homes and businesses, teaching the Scriptures, sharing a meal and the Lord’s Supper, and baptism (pp. 85–106). This was also a time of transition regarding leadership structures, with a plurality of elders being the most common form of church leadership at the beginning of the second century while a system of bishop rule took precedent by the end.

Chapters four and five consider diversity and unity in second-century Christianity. Chapter four provides an introduction to the major heretical movements of the period: Ebionites, Marcionites, Gnostics, and Montanists. Chapter five, on the other hand, provides the helpful corrective to the seemingly hopeless division created by those heresies. In this chapter, Kruger demonstrates that the majority of second-century Christians would have held to orthodox belief as reflected in the “rule of faith” described by numerous Christians writers. That rule closely followed the Apostolic teaching found in the New Testament.

Chapters six and seven also complement each other, discussing the “bookish” nature of second-century Christianity, and the evidence of an early formation of a core canon. Rather than being a time when the Church debated any and every idea, this century was a time when the Church was working hard to establish authoritative teaching and texts.

The picture that confronts the reader of this book is one of a Church in transition, seeking to establish its identity and to stay true to its confession as it continues to grow in a hostile context. As Kruger notes in his conclusion, the modern-day Church has much in common with her second-century forebears, especially as it is increasingly the recipient of political and intellectual animosity (pp. 230–31). The Church today would gain much from delving into the experiences, convictions, and practices of the second-century Church. To that end, this book is an informative, lucid, and enjoyable place to begin.