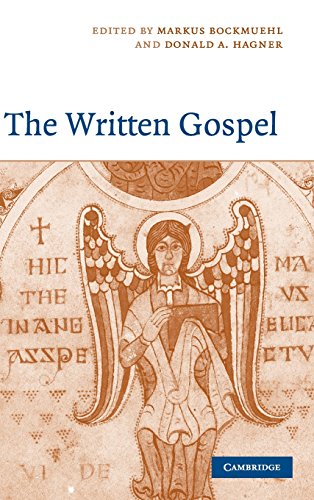 This book is the Festschrift for the 65th birthday of Professor Graham Stanton, although the cover does not show this and there is no portrait inside. A list of Stanton’s publications appears in an appendix, however. The subject of the book reflects Stanton’s main interest and it can be said that it is a worthy tribute with contributions from leading scholars who have kept to their brief, viz. to present a compendium on the gospels from their origins to their reception. The book as a whole shows the correctness of Richard Burridge’s words:

despite two thousand years of tradition, research and speculation … we know practically nothing of who the original authors and audiences of these texts actually were (100).

The volume consists of three parts (I: Before Writing; II: Writing the Four Gospels; III: After Writing). The first part opens with William Horbury discussing the use of ‘gospel’ and related words in Judea in the period before the gospels were written. This is not a simple essay and students may not want to begin reading here. Next Klyne Snodgrass fills just 14 pages on the gospel that was preached by Jesus, concluding that there was much continuity between Jesus and the message of the early church. James Dunn then argues that the source Q existed in oral rather than written form. His essay is not so much an introduction to Q as such but a dialogue with another scholar, John Kloppenborg. The final essay in Part I is by Martin Hengel no less, and focuses on the historicity of the gospel material. As usual Hengel posits that John’s Gospel contains little historical material whereas with regard to the Synoptics he argues that, although we cannot prove much, there is no need to doubt the essential reliability of the traditions behind the texts. The main object of his criticism is Bultmann.

Part II discusses the actual gospels and begins with an attractive essay in which Richard Burridge shows the limited value of the question of authorship and of strong opinions about the first readers of each of the gospels. Characteristics of how each Evangelist actually writes are discussed by Richard Beaton (Matthew), Craig Evans (Mark), David Moessner (Luke) and Judith Lieu (John). Matthew is presented as a gospel which is both faithful to its sources and innovative in its interpretations. Mark is shown to be much more sophisticated than the previous generation of scholars allowed. According to Moessner, Luke cannot be called a biography because of its close relationship with the Jewish scriptures. In an astute way Lieu’s essay lists the relevant issues regarding John largely in the form of unanswered questions. The final contribution to this part is by Stanton’s predecessor in Cambridge, Morna Hooker. In focusing on the beginnings and ends of the gospels she draws on her recent books, emphasizing how much the four (!) gospels have in common in this respect, and that 16:8 is the intended end of Mark.

Part III opens with essays by James Carleton Paget and Loveday Alexander who discuss the limited evidence for reception of the gospels by Jews and by pagans (up to Celsus). Pace the learned authors, I am not sure these marginal subjects deserved a place in this compendium. Christopher Tuckett presents a quick overview and classification of the extra-canonical gospels, written before the Gospel of Judas was published. Not everything that presents itself as gospel can easily be seen as one! Ronald Piper’s essay overlaps with Tuckett’s in that it pays attention to the many gospels that vied for recognition from the early Christians, but Piper’s focus is the canonization of four of them. He relies on Stanton’s work in admitting that the creation of the four gospel canon may predate Irenaeus. I missed interaction with Charles E. Hill (The Johannine Corpus in the Early Church, 2004) who likewise argues that Irenaeus inherited this canon from the generation before him. In the final chapter Bockmuehl discusses the earliest commentaries on the gospels against the background of Greek and Latin literary commentaries and the Scripture commentaries from Qumran. His findings illustrate the preference the early church had for Matthew and John over Mark and Luke.

It is good to notice that a book like this can be written without paying undue attention to what is now often seen as the fifth gospel, that of Thomas, and the other apocryphal gospels. This is not to say that all contributors are Evangelicals; the editors are but they have not imposed their convictions on the contributors. (It is remarkable that only one of the editors also contributed a chapter.) The suggestion that this book is a compendium is a slight overstatement as there are no chapters on the theology of the gospels, early manuscripts, or early translations. It is not a book for beginners who would find it hard going despite the fact that all Greek and Hebrew is transliterated. But no advanced student can afford to ignore it.