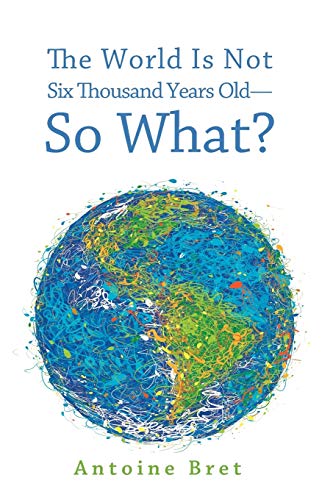 The World Is Not Six Thousand Years Old-So What?

A great amount of technical information, data, and formulae pack this relatively small volume written by Antoine Bret, who is Associate Professor at the University of Castilla-La Mancha, Spain. He has also been a visiting scholar at the Harvard-Smithsonian Center for Astrophysics and authored more than seventy scientific articles. The author seeks to dissuade his readers of the validity of a six-thousand-year-old earth.

Ian H. Hutchinson, Professor of Nuclear Science and Engineering at Massachusetts Institute of Technology, contributed the “Foreword” (pp. vii-xi), in which he suggests that Christians need to understand the OT the way Jesus understood it-non-literally (p. viii). He concludes that it is Scripture, not science, that must be reinterpreted. Hutchinson agrees that the young-earth advocates’ appearance-of-age argument represents legitimate logical reasoning, but he denies it theologically, because he believes it “makes God into a deliberate deceiver” (p. x). Throughout the body of the volume, Bret follows the same line of reasoning, buttressing his arguments from biblical interpretation and secular science.

Bret’s “Introduction” (pp. xvii-xx) sets out his assumptions: (1) the Bible is the inspired Word of God; (2) the Bible is internally consistent; and (3) since God is creator of both the Bible and the physical world, there can be no contradiction between the two (p. xvii). In order to demonstrate that consistency, Bret denies any historicity to the account of creation in Gen 1 (pp. xviii). He concedes that “the opinion that the universe is old eventually relies on . . . trust” (p. xx, emphasis his). However, I got the impression from the context and the remainder of the book that Bret considers observational science to be the necessary object of trust.

The chapter titles represent the flow of Bret’s argumentation. In chapter 1, “If God Did Something, Does It Have to Be a Miracle?” (pp. 1-6), he reasons that the Scripture depicts God as the one who makes events happen in both the sociological realm and the natural realm, even when no miracle or supernatural intervention is involved. The second chapter, “Must Genesis 1 Be a Literal Account?” (pp. 7-18), contends that the early church fathers took much of the Bible symbolically, thus eliminating problems arising out of a more literalistic reading of Genesis. Bret insists that the days cannot be taken as literal twenty-four-hour days (pp. 11-12) and that the early chapters of Genesis are filled with symbolic and spiritualized truth, rather than being literal. He ignores Exod 20:8-11 (the Fourth Commandment), which states that the heavens, the earth, and the seas, and all that is in them were created by God in six days. God presented them to Moses on tablets of stone which He Himself had inscribed (Exod 31:18; 34:1), so the Fourth Commandment is not a human statement or observation. Some of Bret’s examples for figurative language indicate that he builds a straw man depicting literalists as insensitive to figures of speech and metaphors. His argumentation not only mischaracterizes the vast majority of scholars taking a literal approach to Gen 1-3, it unnecessarily ridicules them.

Chapter 3, “Some Misconceptions about Science” (pp. 19-44), takes readers into the room with secular scientists who make objective observations in order to derive verifiable conclusions from the data. He explains that the scientific method accounts for anomalies in data and that scientists allow their conclusions to be tested by their peers prior to publication (pp. 38-39). Bret admits that some scientists (like Richard Dawkins) do engage in an anti-Bible and anti-Christian crusade (p. 20), but he insists that they are not representative of scientists as a whole. In fact, the author states, “The scientific community is not a select private club, where unexpected results have no chance at all to be heard” (p. 20, his emphasis). However, I am personally aware of situations where the scientific community has not been so open and has refused adamantly to even listen to evidence, much less allow publication of research contradicting cherished secular science views. For example, geologist John Whitmore of Cedarville University has attempted to obtain a hearing or to publish his geological analyses of the Grand Canyon’s Coconino sandstone formation. Secular geologists have disregarded his work. He has demonstrated that published observations inaccurately describe the layer’s texture, composition, and deposition (see John Whitmore, “Seven Misconceptions about the Coconino Sandstone, Grand Canyon, Arizona,” The Research and Scholarship Symposium, Cedarville, OH, April 2013, http://works.bepress.com/john_whitmore/18/).

The last two chapters (“More Than Six Thousand Years Traveling” [pp. 45-60] and “Radio Dating and Astrophysics” [pp. 61-83]) come from Bret’s own area of expertise. These chapters provide readers with detailed, but clearly explained, support for his contention for an old universe and old earth. He concludes that physical laws remain the same both on earth and in the distant universe, and that those laws do not change with time (p. 61). Such factors as chemical intrusion might produce variations in radiometric dating, but he claims the variations are minor (pp. 68-74). Readers should pay close attention to the restrictions required in order to have dependable outcomes: first, the subject material must be within a closed system (pp. 63, 68); second, we must know the initial ratio of the materials (pp. 65, 68). He adopts an assumption of uniformitarianism, disallowing any catastrophic event that might produce different environments affecting results. I assume that Bret would therefore deny that the Genesis flood was global and catastrophic.

In spite of the many technical mathematical formulae he inserts, Bret communicates well with non-scientific readers. His emphasis boils down to one basic point: observable data. For Christians wishing to read a well-written and clear scientific case for an old earth and an old universe, Bret’s volume will not disappoint. Unfortunately, he fails to acknowledge or refer to publications like Radioisotopes and the Age of the Earth (vol. 2), ed. Larry Vardiman, Andrew A. Snelling, and Eugene F. Chaffin (El Cajon, CA: Institute for Creation Research, 2005) or astrophysicist Jason Lisle’s Taking Back Astronomy (Green Forest, AR: Master Books, 2006) and any technical peer-reviewed journals produced by several of the creation-science organizations (e.g., Answers Research Journal of Answers in Genesis).