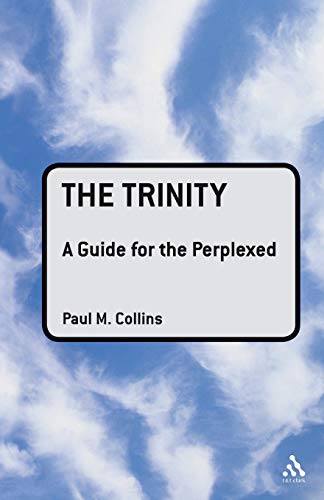 The Trinity: A Guide for the Perplexed

T&T Clark describes their Guides for the Perplexed series as offering “clear, concise and accessible introductions to thinkers, writers and subjects that students and readers can find especially challenging.” The aim is to guide readers “towards a thorough understanding of demanding material.” However, the reader should be aware that Collins’s

intention in writing this guide is not so much to provide answers as to equip the reader in framing good questions of Scripture and tradition and those who seek to interpret them. This guide is not like other introductions to the doctrine of the Trinity. It assumes a basic working knowledge of the doctrine and scholarly discourse concerning it. (p. 5)

Therefore, the reader is often left to resolve the issues or questions raised within the book.

After a brief introduction, Collins begins chapter 1 with attention to the person of Christ and the Holy Spirit in the NT as well as the experience of mystery. For Collins, “the doctrine of the Trinity arises from human reflection upon the experience or encounter with mystery, the witness of the Scripture to the events of revelation and the tradition of Nicene orthodoxy” (p. 26). It is an “ecclesial doctrine” (p. 8) and “is to be understood in relation to the activity of God in the Christ event and the event of Pentecost” (p. 25).

Chapter 2 provides a sketch of “four moments” in the hermeneutical history of the Trinity. In reverse chronological order, Collins begins with the “de Regnon paradigm,” which argues that Eastern trinitarianism begins with the three persons and has a social or communal emphasis, whereas the West begins with the divine unity and focuses on the individual. Collins also offers a brief genealogy of Social Trinitarianism and the appeal to relationality or social understandings of the Godhead. The problem of Socinus, the Schism of 1054, and Arianism form the final three “moments” which serve as examples in which the trinitarian discourse developed. For example, Collins argues that the “disputes concerning Socianism … have influenced the ways in which Nicene orthodoxy is perceived and received” (p. 42).

Chapter 3, the “heart of the book,” focuses on the technical language and major frameworks that are essential and make up the doctrine of the Trinity. Collins surveys the use of trinitarian terminology such as homoousion and prosopon among others. Space is given to a discussion of personhood in modernity in the theology of Karl Rahner, Karl Barth, and particularly John Zizioulas. Collins offers a lengthy treatment of perichoresis followed by a survey of the feminist critique of gendered language.

Most of the attention in chapter 4 is given to “event conceptuality,” which instead of seeing the being of God in terms of changelessness argues for an interpretation of “the encounter with the divine in the economy in terms of ‘event’ ” (p. 116). For Collins, event-conceptuality “has the potential to earth speculation on the inner divine life in the experience of the human encounter with the Divine Three” (p. 117). In contrast to Barth and others, Zizioulas is presented as the theologian who has used event-conceptuality in the most promising way.

The final chapter is much more constructive and concentrates on the relevance of the Trinity. Collins accomplishes this through a discussion of the place of “the Other” in theological reflection on the Trinity. Zizioulas’s “ontology of otherness” enters the dialogue and demonstrates “an answer to the critique that the appeal to communion eliminates otherness” (p. 128). The chapter ends by surveying the identification of Church and Trinity in the ecclesiology of several theologians of the twentieth century. Finally, Collins argues, “as the Eucharist makes the Church, the Church encounters the Divine Three and enters into communion with them” (p. 142).

Collins’ ability to explain the differences and similarities between Eastern and Western views of the Trinity is a great strength of this work. By engaging not only Eastern Orthodox but Roman Catholic theologians as well, the book’s ecumenical approach is a welcomed addition amid other introductions and surveys.

Unfortunately, this book lacks a clear target audience. Is this intended for Europeans, Americans, evangelicals, mainstream, or all of the above? As a priest in the Church of England, is he writing to those within his church or to academics in general? The series in which this book is located would appear to imply that he is writing for students in general, but this is still unclear. The reader should know that this book is not a book for beginners and is more appropriate for a graduate level course on the Trinity due to the expectation that the reader is familiar with thinkers such as Barth, LaCugna, Zizioulas, Derrida, and others.

Additionally, a significant limitation of this guide is that it does not deliver a “thorough understanding of demanding material.” The significance of Wolfhart Pannenberg, Robert W. Jenson, and T. F. Torrance are given very little mention. Most of all, however, more space should have been given to Paul Molnar’s important contribution to this field, especially in Divine Freedom and the Doctrine of the Immanent Trinity (T&T Clark, 2002).

Despite these shortcomings, I would recommend this work to readers who are interested in an ecumenical approach that gives significant attention to modern and social trinitarian issues and thinkers.