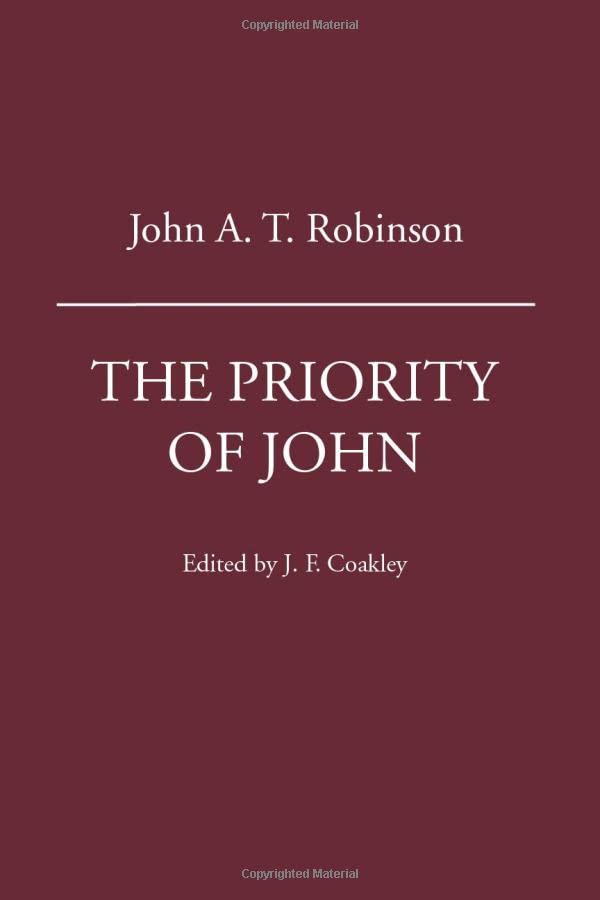 The Priority of John

My personal indebtedness to John Robinson is great. When I was a student at Cambridge I heard him lecture on the Fourth Gospel; and my own interest in John was largely kindled as a result of his teaching, just as it has been subsequently fostered by his personal influence and encouragement. So I awaited the promised appearance of his last book with understandably great eagerness; and reading it, as with writing this review, has been in every sense an act of pietas.

In The Priority of John Dr Robinson gathers up the fruits of his lifelong Johannine research. At the time of his death, in 1983, he had completed the text of the book on which his 1984 Bampton Lectures were to be based, intending to return to the final stages of the volume after the Lectures. But, as is well known, Professor C. F. D. Moule eventually prepared and delivered the Bamptons, while John Robinson’s pupil Dr J. F. Coakley, who teaches at the University of Lancaster, prepared the manuscript of the book for publication.

And what a fascinating and readable study it is! Written with as much pace and freshness as an unforgettable detective story, John Robinson brings to his account the acuteness and cogency of Hercule Poirot himself. As it happens, we know in advance the outcome of the mystery which is being investigated; but nonetheless the writer acts as an expert sleuth, pointing out clues, sifting the evidence, and enabling us time and time again to see, through his magnifying glass, data the importance of which we might otherwise have missed.

Robinson wears his considerable scholarship and erudition lightly, and never allows his knowledge of all the familiar, and many of the less well-known, sources to obscure the main lines of his argument. (Robinson alludes, for example, to H. W. Watkins and G. Edmundson, two of his predecessors in the Bampton lectureship, whose work is immediately relevant to the study of John’s gospel. I must confess that I had heard of neither of them!) Inevitably, some of the material in this book is familiar to us from other sources to which John Robinson has contributed. So also is his basic thesis. Nevertheless, the fact that the Robinsonian stance is known to us already in no way detracts from the value of the volume, which presents the case for Johannine priority, and its implications, at greater depth and with greater detail than has been possible before.

But it is crucial that the nature of the case itself should be properly understood. Despite the title of this book, and the totally misleading claim on its dust-cover, Robinson is not arguing that ‘the Gospel of John was the first Gospel to be written’. He is examining instead the possibility that John’s underlying tradition is primitive; that the fourth evangelist drew on sources which are independent of the synoptic witnesses, and therefore deserve to be considered as valuable historically as the equally independent traditions Mark, Q, M and L. In Robinson’s own words, his aim is not to prove that his is the only tenable position, but the more modest intention of trying out an hypothesis, exploring ‘what happens if one reverses the prevailing presumption that John is not a primary source’ (p. 9). Not all will agree with this supposition, or the results which it yields for this author, especially in relation to the final dating of the Letters and Gospel of John, which are placed in that order by Robinson, and given a pre-AD 70 date. But the possibility that John’s tradition is historically respectable as well as theologically interpreted (a theory which has altered the face of Johannine studies radically) has gained considerable ground in the last quarter-century, and is one to which many scholars would give support today. Robinson lends weight to his view by means of the more debatable claim that John the apostle was himself the (only) author of the Fourth Gospel. But, either way, it is this presumption which is being tested in this book: that John ‘got it right—historically and theologically’ (p. xiii).

In many ways the most important section of this book is the first chapter, where Robinson deals with this matter of ‘presumption’: reversing normal critical orthodoxy (which operated until the middle of this century, at least), and presuming the priority rather than the posteriority of John. If we do not postulate, Robinson argues, that John has to be slotted into the synoptic picture of Jesus, we can reasonably ask what may be learned from making the opposite presumption. And the results are intriguing. The links in time, place and person (the person being John the apostle, the beloved disciple) are ‘sufficiently plausible at least to make it worthwhile to follow up and test out the presumption that the Fourth Gospel could take us as far back to source as any other’ (p. 122). So far as the chronology of the gospels is concerned, the Markan timetable of the ministry of Jesus can be fitted into John, but, because the Markan chronology is too fragmentary, not the reverse; and this suggests that, where there are incompatibilities, the Johannine evidence is to be preferred. At many points in the recitation of the story of Jesus (beginning, middle and end) the presumption of John’s priority throws light on the historicity of the narrative, and makes sense of it. John’s account of the teaching of Jesus is not artificial and contrived, but integrated with the narrative itself, and much nearer in character to the synoptic witness than is often supposed; both traditions may therefore reflect the original teaching of Jesus. The Johannine portrait of Jesus himself, as ‘fully a man of our history and uniquely his Father’s son’ (p. 397), is likely to be correct, and, once again, not so far removed from the presentation of the person of Christ in the other three gospels.

Re-examining familiar material from his own, unusual, perspective, John Robinson thus constantly produces fresh insights and unexpected discoveries. Nevertheless, whatever view is taken of his controlling argument, some of the detailed conclusions which arise from it may be disputed. I question, for example, whether the ministry of Jesus was really so short (Robinson suggests that the synoptic and Johannine pictures both presuppose a two-year pattern), and whether the events of holy week were quite so concentrated (less than a week). I also wonder if John’s Christology is as ‘low’ as Robinson seems to imply. Moreover, even if we opt for the historical reliability of John’s basic tradition, as I would, some may argue that the theological accuracy of John’s interpretation of that tradition cannot be so easily established. And the trouble with all presumptions is that, depending on the set chosen, they can work in opposite directions. Nevertheless Robinson’s investigations are significant and appealing; and in future they must be taken as a standard reference for all studies of John.

Robinson’s account of Johannine priority is weighty and lengthy. But he puts himself into all that he writes; and, even if the long footnotes with their ample quotations might have been somewhat pruned, they contain endlessly perceptive and often amusing comments and criticisms. The volume as a whole is beautifully and accurately produced, and Chip Coakley’s editorship is expert. On the front of the dust-cover is a picture of the beloved disciple. It is a detail from the Giotto crucifix in the Basilica of Santa Maria Novella, Florence. John Robinson had this picture on the desk while he was finishing his final book: one John reflectively gazing at another. No doubt in heaven the two Johns are even closer together, and further light is dawning upon them.