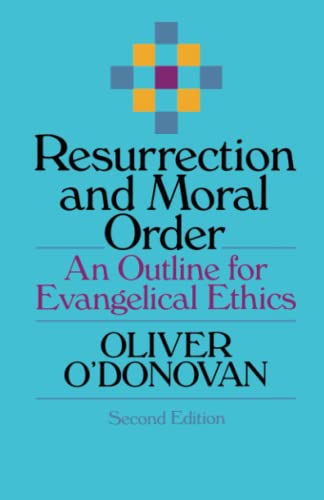 The importance of this book lies in the corrective it provides to two equally erroneous Christian approaches to ethics. There have always been those whose interpretation of the gospel as an essentially ‘spiritual’ phenomenon has obliged them to neglect ethical considerations in favour of personal piety and doctrinal orthodoxy. Others, disappointed by this apparent failure to address the world’s problems, have taken the opposite course and have propounded a ‘social gospel’ as the essence of Christianity at the expense of traditional beliefs concerning the person and work of Christ.

It is in direct opposition to both these tendencies that Professor O’Donovan proceeds with his contention that ‘Christian ethics must arise from the Gospel of Jesus Christ’ (p. 11). Both moralism and antinomianism rest upon a false dualism more proper to the Gnostic systems than to a Christianity which takes seriously the redeeming act of God in his Son Jesus Christ. Once the nature of this act as a recreation and vindication of the natural order in the resurrection of Christ is perceived, these sub-Christian alternatives must be left behind in the realization that ‘certain ethical and moral judgments belong to the gospel itself’ (p. 12). Evangelical ethics is thus not to be considered as a subject in its own right, but is properly an aspect of soteriology concerned with the new life in Christ.

Professor O’Donovan speaks of three ‘moments’ in the salvation of man: the past moment, in which God acted decisively once-for-all, renewing his creation in Christ; the present moment, in which the Holy Spirit enables us to participate in this new creation; and the future moment, in which lies the final consummation of the divine salvific purpose. In accordance with this model, Part One of O’Donovan’s book deals with the objectivity of the moral order which God has established in creation and vindicated in redemption. An evangelical ethics cannot condone the objectifying approaches to moral order represented by voluntarism and rationalism. If Christian morality consists properly of man’s appropriate response to the divine ordering of creation, then that ordering must be real, and not simply a measure of man’s ability to impose order upon what he experiences. Alongside this affirmation, however, O’Donovan calls us to ‘reckon also upon the opacity and obscurity of that order to the human mind which has rejected the knowledge of its Creator’ (p. 19). There can be no ‘natural law’ in the noetic sense. Christian ethics must feel the force of the cross before it can proclaim the resurrection. It is only in Christ that we truly know the moral order of creation as it stands before us in judgment as well as grace (here, as elsewhere, we see that the influence of Barth is not limited to the placing of discursive material in small print). The responsibility which this knowledge in Christ imposes upon the church is that of being a prophetic voice in the world, avoiding the erroneous alternatives of moral totalitarianism on the one hand and ‘ecclesiastical house rules’ on the other.

Part Two, entitled ‘The Subjective Reality’, approaches the question of moral order from the perspective of man’s participation in the new humanity in Christ. Thus whilst O’Donovan is eager to point us first and foremost to the objective reality of redemption, he is in no way guilty of ‘objectivism’. The restoration which God has set forth in his Son does not proceed independently of us, but for our sakes. God is not content to leave us in our sin, but gives us to participate in the renewed order. Our moral agency as Christians is thus enabled by the Spirit of Christ who makes the ‘objective’ subjective in our lives. He it is who evokes our free response as moral agents to the authority of the New Creation. Thus true human freedom is not overwhelmed or contradicted by the presence of grace, but is upheld and affirmed. This is contrary to the popular presentation of human fulfilment as consisting in increased autonomy and self-sufficiency.

We might expect Part Three to deal with the third ‘moment’ of redemption, as indeed it does in the final chapter presenting the eschaton as the telos of the moral life; but this section as a whole attempts to deal with the form of the moral life which has been revealed to us as love. This is considered first from the perspective of the variety of situations to which the moral agent might find him or herself having to respond. O’Donovan reminds us again that we are living in a universe rather than a multiverse, and thus even the most novel occurrence is encompassed within the interpretative matrix of the divine ordering.

After a consideration of the moral subject in terms of the relation of character to actions, there follows a Christological reworking of the twofold command of Jesus to love God and our neighbour. This must direct us to Christ, our love for whom fulfils both aspects of the command. The point is a powerful one, and might perhaps have been developed more fully along the lines that our relationship to God is not primarily an immediate vertical relation but a horizontal relation through the mediating humanity of Christ, a fact which condemns further any ‘spiritualizing’ of the Christian life. The book continues, however, by raising the question ‘who is my neighbour?’ in terms of the Christian perception of human personhood. Who is a person? O’Donovan answers this question with the challenging statement that ‘the church anticipates restored humanity, and all humanity lies implicitly within the church’ (p. 242). Thus there can be no theological justification for the dehumanizing of any group or individual; all are comprehended in our love for Christ the Head.

It is impossible to do justice in so little space to the breadth of scope of this book, incorporating as it does penetrating discussions on issues of philosophy, hermeneutics, ecclesiology, and many other topics in addition to those discussed above. That this is achieved without the cost of superficiality is a fact which ought to command the respect of ethicists and theologians alike.