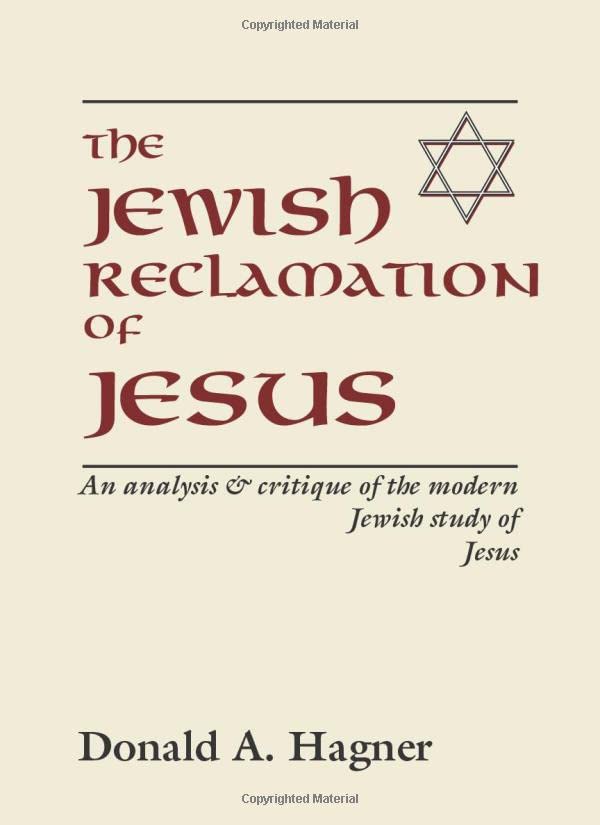 The Jewish Reclamation of Jesus

Written by Donald A. Hagner Reviewed By John Woodhead
Mission and Culture

In his analysis and critique of modern Jewish research on Jesus, Hagner adds to the Judeao-Christian debate. Instead of following current trends and concentrating on issues common to both faiths, he takes an uncompromising evangelical stand and brings into question the very value of the Jewish approach which seeks to show Jesus and his teaching as entirely Jewish.

In Chapters 1–2 Hagner reviews the history of Jewish literature and attitude to Jesus. Two conclusions arise from this. First, the willingness of Judaism to reclaim Jesus reflects an improvement in Jewish-Christian relations. Secondly, the readiness to reclaim Jesus has not brought any fundamental change in accepting the teachings of the gospel.

In Chapters 3–6 Hagner analyses Jewish attitudes to various aspects of the teachings of Jesus, his ministry and his person. These include the ‘law’, and Jesus’ claim of authority over it, particularly as the Jews are first and foremost the people of the law; ‘the kingdom of God’, its nearness and the eschatological perspective at the heart of Jesus’ message, with its ethical teaching, of which various aspects are dealt with, particularly his teaching on love and its implications; Jesus’ religious teaching, which includes an examination of grace and works, repentance, atonement, prayer, God as father and the place of Jesus. In these chapters Hagner outlines the views of major Jewish scholars, the way they try to reclaim Jesus and his teaching for Rabbinic Judaism, and particularly the way in which the problem topics are dealt with. Their general attitude may be summed up by saying that all that is good in the gospels is not new and can be found in Rabbinic Judaism, and what is new in Jesus’ ministry is either argued away as theological insertion by the early church or conceded as a mistaken view developed by Jesus.

Hagner then deals with the person of Jesus, assessing the categories into which Jewish scholarship attempts to place him (i.e. Pharisee, prophet, etc.). He then looks at the Christian titles of Jesus and Jewish reaction to them, showing that even if they could accept Jesus as Messiah, the Jewish understanding of this term would differ from the Christian understanding.

In the concluding chapter Hagner assesses the contribution the Jewish reclamation of Jesus has made in making Christians more aware of the Jewish context of the gospel, but concludes that this reclamation is at an impasse because of the lack of desire to face the central message of the gospels, thereby concentrating merely on peripheral issues.

In three excursions Hagner deals with Pharisaism and the question of originality in the teaching and ministry of Jesus.

The subjects dealt with in the book are highly controversial and sensitive, but although Hagner’s stand and approach are challenging, he writes in a positive and constructive way.

Finally, Hagner shows how the emancipation opened the way for liberal Jewish scholars to try and reclaim Jesus. The return of the Jews to Israel will, and is beginning to, bring the nation of Israel to reclaim Jesus not into Rabbinic Judaism but as Saviour.