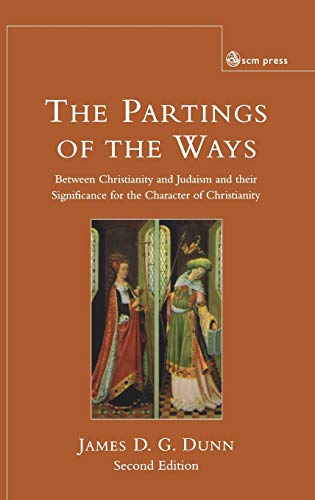 The prolific pen of James Dunn offers us another attempt to gain a comprehensive overview (as he puts it) of the historical development of the early Christian faith. Previously he has given us Unity and Diversity in the New Testament (1977). The present work displays the same ease of movement over a wide area, but with more mature and restrained judgment. The author has rightly seized upon the question of how Christianity came to be a separate entity from Judaism as the Ariadne’s thread in exploring its early character—particularly in the light of the ‘new look’ on Judaism which has developed in recent years and to which he has already made his own distinctive contribution (in his essays on Jesus, Paul and the Law (1990) and his Word Biblical Commentary on Romans (1988)). The approach invites comparison with that of P.M. Casey, From Jewish Prophet to Gentile God (Cambridge, 1991).

Dunn starts by delineating the four ‘pillars’ of Judaism: monotheism, election, Torah and temple. He then asks how the attitudes of Jesus and his first followers developed over against these four entities: to what extent did they remain within parameters that would have been acceptable to Jews, and at what stages did they move outside them? Dunn paints a good picture of the attitude of Jesus and his followers to the temple with some interaction with E.P. Sanders. He shows that there was nothing overt in the attitudes of Jesus and the earliest disciples which would have caused a decisive rift, but from an early date the attitude of Stephen and the Hellenists was somewhat different, so that by the time we reach Paul the temple has ceased to be significant and there is no longer room for a sacrificial cult. Dunn argues that it is not until we get to the Hellenists that we find the beginnings of a sacrificial interpretation of the death of Jesus. And in a book which began as lectures in Rome, he includes a brief note criticizing the existence of any special order of priests within the contemporary church.

Next, he tackles the election of Israel and the Torah. Jesus is seen to attack a factional view of the law but not the law itself. If, however, the two factions which he attacked (Pharisees and Sadducees) were the de factointerpreters of the law for the community as a whole, then Jesus presumably appeared less Jewish to his contemporaries than Dunn perhaps suggests. To be sure, the fact that there was a strongly pro-Jewish group in the early church is easily forgotten—and we need to ask how such a group came into existence and persisted. However, Dunn underestimates the radicality of the attitude of the Hellenists to the law, by not taking up S.G. Wilson’s demonstration that ‘the customs’ (Acts 6:14) are in fact the requirements of the Torah. He argues that Judaism was characterized by ‘covenantal nomism’ (E.P. Sanders), which he interprets as the things that Jews did to demonstrate their Jewishness (especially the Sabbath and the food laws); for Paul, faith was all-important, and this made the distinctives of Judaism into an abuse of the law which acted as a boundary to shut out Gentiles. Paul did not object to the law in itself, but his attitude in effect undermined this pillar of Judaism. The question of anti-Semitism (anti-Judaism) in the early church is then posed, and Dunn argues rightly against J.T. Sanders and others for a prophetic critique by Christians and a claim that God’s election was not confined to Jews and Judaism. There was variety of attitudes within post-70 Christianity.

But the supreme issue was that of the person of Jesus. Here Dunn takes us once more over some of the ground covered in his Christology in the Making (1980), with particular reference to the question of how far early Christians maintained Jewish monotheism. Jesus himself, argues Dunn, said and did nothing to undermine traditional monotheism. Jesus ‘seems to have resisted the title and role [sc. of Messiah] as inappropriate or inadequate to his mission, at least as understood at the time’ (p. 169). ‘Son of God’ was not necessarily indicative of divinity, and ‘Son of Man’ equally was consistent with monotheism. Jesus rather showed self-conscious authority ‘as the eschatological spokesman for God’ (p. 181). Following the resurrection, his followers recognized him as ‘Lord’, but Dunn argues that this term was used partly to distinguish him from God. God had shared his lordship with him, but ‘To call Jesus “Lord”, therefore, was evidently not understood in earliest Christianity as identifying him with God’ (p. 191). Jesus was understood in terms of Adam and Wisdom, the latter being a way of expressing God’s self-revelation. Paul and other early Christians did not think of Jesus as God, but devotion to him gradually turned into worship, and the crisis came with the Gospel of John (but not before!) where Jesus makes himself God in the eyes of the Jews, although John saw himself as still a monotheist. Dunn claims that Jesus is to be seen as God incarnate, not as the Son of God incarnate; he ‘is the Son of God as the Logos, as the self-expression of God’ (p. 246).

Dunn continues to cause problems for himself in this crucial area by his use of the anachronistic term ‘divinity’ and the slippery term ‘identify’. There is never any suggestion in the NT that Jesus was God the Father. Further, Dunn appears to think that the choice was between monotheism and bi-/tri-theism. He does not consider sufficiently the possibility that the effect of Jesus was to lead to a fresh understanding of the nature of God, in terms of a complex unity rather than of a simple unit. As a result he seems to me to misunderstand seriously the development of Christology as the early Christians entered on a totally new path of understanding the nature of God despite the danger of being accused of bitheism.

This is an important book. As a textbook, it will introduce students to a wide sweep of early Christian history and thought. As a contribution to scholarship, it takes up and consolidates much of what Dunn has previously written. As a stimulus to thinking, it challenges some accepted views and poses fresh hypotheses. With much of its content one can readily agree, but in the end its christological thesis—and its implications—raise serious doubts.