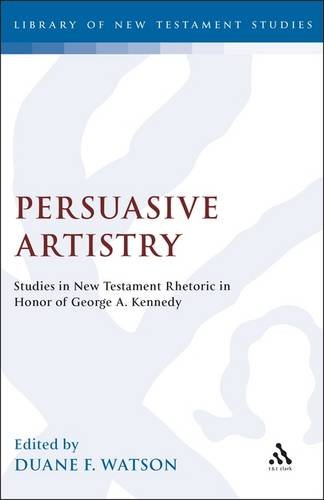 A relatively recent approach to NT study that has proved quite significant is rhetorical criticism. George A. Kennedy is a pioneer in the integration of biblical and classical rhetorical studies. His New Testament Interpretation through Rhetorical Criticism (1984) is an essential introduction to the method. It is eminently fitting that a Festschrift for Kennedy be published. The contributors to the collection are either students of Kennedy or ones whose work has benefited by his scholarship. The 17 articles all (except for Yehoshua Gitay’s ‘Rhetorical Criticism and the Prophetic Discourse’) concern a rhetorical criticism of the NT.

Three articles in Persuasive Artistry concern the methodology of a Christian rhetoric of the first century. These three articles may well be the most important in the volume, since they furnish the reader with cogent explanations of what the NT writers understand about their own rhetorical task. John R. Levison’s ‘Did the Spirit Inspire Rhetoric? An Exploration of George Kennedy’s Definition of Early Christian Rhetoric’ (pp. 25–40) represents an attempt to sharpen the honoree’s view of rhetorical discourse in the NT. According to Levison, Kennedy’s division of rhetoric into the three categories of (1) classical, (2) Christian-classical and (3) radical Christian is erroneous. Mark 13:9–13 illustrates a universal radical Christian rhetoric for Kennedy. Such rhetoric relies, not upon conscious planned rhetorical strategies, but upon the inspiration of the Spirit. However, Levison claims that the passage only envisages a specific, highly eschatological situation when the Holy Spirit grants utterance to Jesus’ witnesses, a time of trial and persecution. The situation ought not to be understood as indicative of a universal Christian experience.

Similarly, 1 Corinthians 1–2 does not evince a spontaneously prompted proclamation of the Spirit by Paul, despite apparent claims to the contrary. The apostle does regard the Spirit as the source of his preaching, but not in such a way that the speaker’s own identity is dissolved. Paul understands the Spirit to inspire his rhetoric with persuasive wisdom. The passage is rich in irony: Paul claims to be opposed to persuasive wisdom, but speaks in a very persuasive manner in the letter (1 Cor. 1:21; 2:4). Hence the Spirit in Paul’s kerygma is ‘artificer’, not ‘overcomer’. Levison thus refines Kennedy’s classification of primitive Christian rhetoric. We ought to regard Mark 13:9–13 as reflective of a unique situation and not of a normative early Christian experience. Paul’s words in 1 Corinthians 1–2 should lead us to believe that early Christian preaching may well have utilized classical rhetorical elements to some degree, since in those chapters the apostle uses such elements despite apparently eschewing them. Sound rhetoric is not antithetical to ministry inspired by the Spirit. Rather, the Spirit uses and inspires persuasive speech.

‘Writing as a Rhetorical Act in Plutarch and the Gospels’ (pp. 142–168) is Vernon K. Robbins’s treatment of the phenomenon of ‘recitation composition’, common to ancient rhetoric. According to Robbins, writing in first-century rhetorical culture included both scribal (copying extant texts) and progymnastic (persuasively composing new versions of transmitted materials) activity. We should not expect the gospels to agree perfectly on what they relate since each evangelist attempts to shape transmitted or recited words and events in his own persuasive fashion, in a manner different from his predecessors. Some verbatim copying may occur, but the writers feel free to shape their material according to their style and interests. The parallel passages, Matthew 4:18–22 and Mark 1:16–20, illustrate Robbins’s contention.

Robert G. Hall affirms that a feature of classical rhetoric is for the composer of a discourse to shape historical details to suit his discursive intent. Hall’s article, ‘Historical Inference and Rhetorical Effect: Another Look at Galatians 1 and 2’ (pp. 308–320), cautions the interpreter against an over-confident adoption of the letters of Paul over Acts as a basis for the reconstruction of a chronology of the apostle’s life and ministry (as in John Knox, Chapters in a Life of Paul). Ancient narration would suggest that Paul omitted all references to journeys to Jerusalem except those required by his argument. The two Jerusalem visits mentioned by Paul in Galatians 1:18 and 2:1 may have been augmented by other journeys to that city between his conversion and the writing of Galatians.

Some articles in Persuasive Artistry concern a rhetorical-critical analysis of entire passages. In my opinion, Duane F. Watson’s is the best in that it most effectively demonstrates rhetorical analysis at work in exegesis. ‘Paul’s Speech to the Ephesian Elders (Acts 20:17–38): Epideictic Rhetoric of Farewell’ (pp. 184–208) functions as a model to the pastor and teacher regarding how the approach can work. Still other articles in the volume concern themselves with stylistic elements of particular passages. For example, Richard B. Vinson analyses the use of the enthymeme (a syllogism with one of the terms suppressed) in the synoptic gospels (pp. 119–141), whereas Robert Jewett studies (pp. 227–245) the numerical sequences in Romans (cf. 2:21–23; 8:38–39; 9:4–5) and their contribution to Paul’s rhetorical strategy.

Persuasive Artistry is important for its exegetical insights as well as its exemplification of the practice of rhetorical criticism in NT study. Though all the articles in the work are informative, not all are of equal accessibility to the student or pastor.

Regarding the format, JSOT Press is to be commended for a very readable text whose words, phrases, and passages in Greek and Latin are, for the most part, translated. Hence even the student who knows those languages reads the articles more easily. The footnotes themselves constitute an ample bibliography for rhetorical criticism of the NT. I offer one small negative criticism: although technical terms are often explained, a glossary of such terms would have been useful, so that the reader would not need to flip back to an earlier section of an article to search for a required definition that had been forgotten.