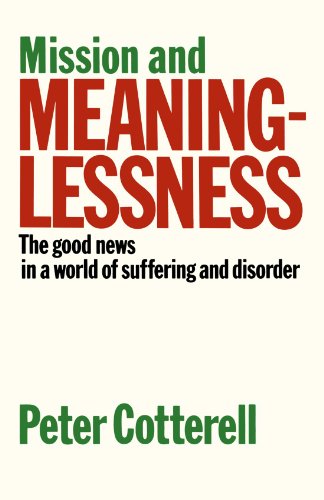 Written by Peter Cotterell Reviewed By Siôn A. Owen
Mission and Culture

In the western world, at least, one of the greatest problems facing the church today is that, despite its own conviction that its mission is to proclaim the most important News the world can ever hear, it is generally seen by that world as quite simply an irrelevancy. The church’s resources may still be seen as a socially necessary context for weddings, funerals and infant name-giving, but little cognizance is taken of the real reason why the church is there at all.

Peter Cotterell takes a detailed look at just what that mission is, with special reference to the universal (though not always conscious) human experience of what the Buddhist would refer to as dulkha, ‘the general unsatisfactoriness of life’ (p. 7)—that life, taken at its face value, is quite simply meaningless. He begins by exploring the various aspects of this meaninglessness before turning to the biblical treatment of the subject and its resolution in Christ. He then considers the situation of the church today in various parts of the world and considers three particular alternative solutions to the problem, in Islam, Marxism and liberation theology. The book concludes with a short, but powerful, challenge to the church to rethink its mission as being to reach out to the world rather than merely to draw into the church.

Too much Christian writing suffers from either an excess of zeal, resulting in prejudice and a contempt for rational argument, or, at the opposite pole, a tendency to avoid making absolute statements at all, so reducing everything ultimately to a bland relativism. Peter Cotterell avoids both these pitfalls: he argues firmly, but fairly, maintaining a scholarly respect for the opposing viewpoint without compromising the view which he holds to be right. His particular familiarity with linguistics and communication theory also ensures that each argument is based on a detailed examination of the evidence. This is particularly exemplified in his chapter on ‘Religions in Conflict’ and in his analysis of liberation theology. In the latter case, while he clearly states his disagreement with, for example, the liberation theologians’ understanding of sin (pp. 131f.), he is quite ready to note also his gratitude for their restoration to Christianity (following Moltmann) of a ‘Jesus of identification’ (p. 257).

Inevitably, where a subject of such depth and breadth is dealt with in a single volume, it will be possible to find areas where more thorough treatment would seem desirable. For example, the question of election is not really adequately examined on pages 139ff.—although it is of course questionable whether an adequate examination of such a subject is ever possible! There are also places where important subjects are touched upon, but the reader is left looking in vain for the further development which would seem to be necessary, as in the case of the very brief comments on the nature of ministry, with particular relevance to the role of women, on page 184. This may well not be a central theme in the discussion as a whole, but is surely deserving of a more detailed analysis as impinging on how the world views the church and how the church views itself.

Such points, however, detract nothing from the value of the book as a whole as a scholarly study with important practical implications. One reason for this is that the author is here dealing with the more foundational issues of motivation and rationale rather than method. Of particular importance is his insight into the mission of the church, mirroring that of the Holy Spirit, as being essentially elenctic (pp. 117ff.)—that is, it is a stand for truth, and a challenge to untruth and sin as being fundamentally anti-God (and therefore anti-humanity); as such, it always seeks a response of repentance and faith. This realization has two important consequences: firstly, it rejects any unbiblical dichotomy between truth and love, challenge and acceptance, for love must embrace truth and the aim of challenge must be to enable acceptance. Secondly, it illegitimizes the dissection of mission into the ‘social’ and the ‘spiritual’ (or ‘proclamational’), for elenctic mission must be both/and, allowing, of course, for differing emphases in different contexts.

Peter Cotterell is to be thanked for a contribution to evangelical missiology which is built on a robust biblical scholarship coupled with an honest appraisal of the reality of the church’s situation in the world today. Above all, it recognizes mission as the thrust of God’s truth through his church to the very centre of human life—the only authentic challenge to meaninglessness and the ultimate relevancy. To describe it as thought-provoking would fail to do this work justice, for it is to be hoped that it will provoke thought only as a prelude to relevant, and urgent, action.