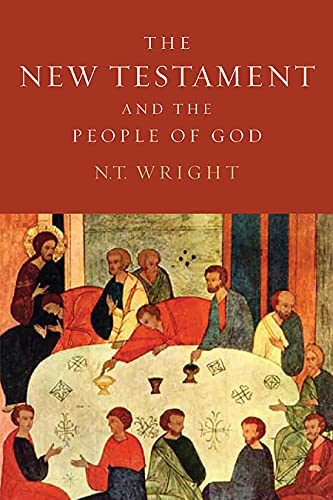 The New Testament and the People of God (Christian Origins and the Question of God, vol. 1)

Tom Wright, whose name will be known to many Themelios readers, here launches a project which, if not quite on the scale of Barth’s Church Dogmatics, is as far as I know unparalleled in recent NT scholarship. It is projected to consister of five volumes, and if other volumes are on the scale of the first this will add up to nearly 3,000 tightly packed pages.

Disarmingly, Dr Wright explains that he never meant it to be like that when he began. It was to be a two-volume study of Jesus and Paul. But a separate volume on the gospels soon demanded to be written, and associated issues expanded to the point where separate volumes of introduction and a conclusion would be needed. The 300,000 words or so which confront us in this volume are thus merely prolegomena!

Given the immense scholarly output in NT studies these days, when no-one seems to feel that one volume is enough to write a commentary on a single NT book, my heart sinks at the prospect of a further contribution, of a quality which one cannot and would not want to ignore, on such a scale. Is this not self-indulgence on the part of the author at the expense of the rest of us? Can even full-time academics find the time to read books on this scale? And is it not ambitious almost to the point of hubris to launch what looks like a life-time’s magnum opus in one’s early 40s?

And yet the breadth of vision is admirable, and to read this first volume is to have no doubt that Dr Wright’s work is firmly founded in an enviably wide and clearly focused knowledge of NT and related scholarship (some of it, especially in literary studies, relatively unknown to many other NT specialists).

There are three main parts to this first volume. The first, a broad-ranging critique of methodological issues in NT scholarship, is full of independence and common sense, enlivened by frequent, well-chosen analogies from music, art and secular literature. One of the main emphases of the whole book is the importance of the concept of ‘story’ for understanding early Christianity, and to this end Dr Wright here offers a full study, with frequent diagrams, of Griemas’ view of how stories work. I share some of his enthusiasm for ‘story’, but remain to be convinced that Griemas’ scheme is as illuminating for the NT as Dr Wright has apparently found it.

There follows a 200-page study of first-century Judaism. Here is an excellent introduction to the current state of scholarship in this fast-moving area. Dr Wright refers copiously to the work of Sanders and Neusner, but is not afraid to take an independent line, often at the cutting edge of developing thinking. The old stereotypes of the era dominated by Jeremias et al are boldly left behind, and the whole has a feeling of ‘critical realism’ (Dr Wright’s preferred label for his own approach) which is heartily welcome. I wonder, however, whether a study so closely tied to current debate, and particularly to the views of a few key figures of the ’80s, may not in a decade or so (before the five-volume work is complete?!) look rather dated. For now, however, if you want to know where discussion has got to on Zealots, Pharisees, Essenes, Jewish monotheism and covenant theology, apocalyptic, etc., here is an excellent place to begin.

The third main section is a study of early Christianity (not yet of Jesus or of the gospels as such—these are still to come). The focus is on Christian ‘stories’, and this leads to some interesting comparisons, e.g. of Luke with Josephus (pp. 373–384), of Matthew with Deuteronomy, of Mark with apocalyptic, etc. In each part of the NT Dr Wright finds, in different ways, ‘the Israel-story, fulfilled, subverted and transformed by the Jesus-story, and now subverting the world’s stories’ (p. 407). He then turns to the smaller story-units, and offers a devastating exposé of the limited vision of classical form criticism. Its fault was that its essential models were Hellenistic rather than Jewish, and so it got the whole development upside-down. Dr Wright now proposes to turn the whole method on its head (a favourite phrase!), by seeing e.g. the simpler, less ‘allegorical’ forms of parables as later, Hellenizing reductions of originally more complex and luxuriant Jewish-type teaching. This section, tantalizingly brief (despite my earlier complaints about the size of the project as a whole!), offers rich food for thought about a new and more ‘critical realistic’ literary approach to the NT. I hope the later volumes will fill it out.

Those are in broad terms the main themes of this rather ‘omnibus’ volume. But its value lies as much in the frequent delights which await the reader in the more detailed issues which crop up along the way. I hope you will enjoy, or at least be provoked by, for instance, the defence of Dr Wright’s proposal (scrupulously observed throughout the volume) to spell ‘god’ with a small ‘g’ (pp. xiv–xv), the rebuttal of Sanders’ view that first-century Jews didn’t mind eating with Gentiles (pp. 238–241), a splendidly creative study of Daniel 7 which overturns a lot of exegetical assumptions (pp. 291–297), and the trenchant dismissal in one paragraph of the scholarly myth of the ‘delay of the parousia’ as a determinative factor in NT theology (pp. 462–463). This is a bran-tub full of such goodies.

Thank you, Tom. I had to make my ritual protest above, but this is a refreshing and heartening book, and I wish the whole project well, even if I don’t expect to find time to read it all!