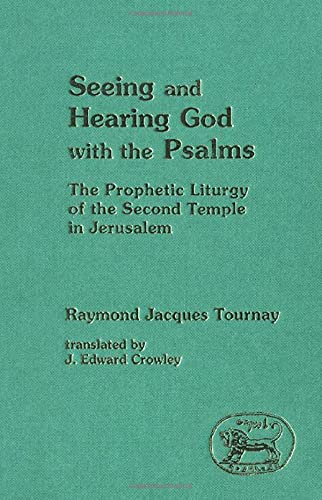 Seeing and Hearing God with the Psalms: The Prophetic Liturgy of the Second Temple in Jerusalem (JSOT Supplement 118)

This book first appeared in French in 1988 and is written by one of today’s foremost ‘connoisseurs’ of the Psalms. The author, distinguished emeritus professor at the Ecole Biblique in Jerusalem, has published extensively on the subject since 1946, and it shows! Though not yet his quintessence on studies of the Psalms, perhaps, it is, in the eyes of this reviewer, no doubt one of the major works published recently. No wonder there is an English translation (and a very good one at that).

The sub-title states his basic thesis: psalmody is part and parcel of prophetic liturgy. This, Tournay feels, has been too much neglected until now in scholarly treatments of the Psalms.

At the end of a thorough overview of recent studies, he opts for the views of Mowinkel (1963) and especially D.L. Petersen (1977) who claimed that psalmody is basically a matter of liturgy and must be linked to prophetism. One ought to pay more attention to the oracles through which YHWH ‘was supposed to have responded to the faithful’ (p. 29). Tournay, then, clearly sides with Petersen and others by stating that the ‘oracles’ (i.e. God’s own words, ‘YHWH-Rede’) in the Psalms, so reminiscent of the prophets, emanate not from the monarchic period (Mowinkel) but from ‘Levitical singers’ of the Second Temple period who took over their role and conducted themselves as cultic prophets: ‘Levitical singers of the Second Temple wanted to make up for the stilling of prophecy, the silence of the hidden God’ (p. 31). In the official liturgy of that time (sixth and fifth centuries bc), the mystical meeting between YHWH and the faithful takes place. This is what we encounter in most Psalms. Tournay goes into great detail to show just this.

Who were these Levitical singers? In the so-called ‘Levitical Sermons’ of the Book of Chronicles, the Chronicler makes use of earlier prophetic writings to undergird his own authority (e.g. 2 Ch. 20:20, quoting Is. 7:9), thus playing ‘a kind of literary game’ (p. 35). Levitical sermons mostly start with an exhortation in a distinctive deuteronomistic tone (e.g. ‘Listen to me, my brethren and my people’, 1 Ch. 28:2). Since such phrases and many similar ones (e.g. ‘be strong’, 1 Ch. 28:10; ‘take heart’, 2 Ch. 15:7) turn up again in the Psalms, it follows that the Psalms, characterized by the same terminology and style, have been ‘reread’ (and thus augmented) in the liturgy of the period of the Chronicler(s). ‘The gradual disappearance of classical prophecy’ (the title of ch. 2) culminated in the awareness on the part of the Levitical singers that they had ‘to make up their own way for the silence of classical prophecy’ (p. 56). This they did by becoming ‘authentic cultic prophets’ (the title of ch. 3) in that they emphasize theophanies (chs. 4–8) and oracles (chs. 9–11). As to the Messianic Psalms (the 12th and last ch.), Tournay sides with those for whom ‘true’ messianism in the religious sense (p. 200) did not appear before (again!) the Second Temple period when the ‘royal’ Psalms were ‘placed back into their prophetic and oracular setting’ (p. 229) by the Levitical singers or cultic prophets.

Acknowledging that scholars do not agree on whether such cultic prophets ever existed, Tournay nevertheless takes up the entire discussion anew, arguing that the prophetic corpus as a whole shows how ‘editors beginning in 515 bc tried to adapt it to the liturgical needs of the Judaic community’ (p. 61). Thus Hab. 2:20, for example: ‘Be silent in the Lord’s presence, all the earth’, alerts hearers to listen to the theophanic poem that follows. ‘Silence should precede every divine oracle (Zeph. 1:7; Ps. 76:9; Wis. 18:14; Rev. 8:1).… this prayer should be considered a continuation of the preceding oracle … was, however, adapted to the liturgy of the Second Temple by the Levitical singers’ (p. 63).

The thorough discussion of so many texts in such a succinct and refreshing way, as well as the biblically holistic approach (references to the NT abound), will be much appreciated by the readers of this journal. There are three very basic setbacks, nevertheless:

This book should be read alongside others, two of which are published by the same publisher, viz. A.R. Johnson, The Cultic Prophet and Israel’s Psalmody (Cardiff, 1979), and J.E. Eaton, Kingship and the Psalms(Sheffield, 21986).