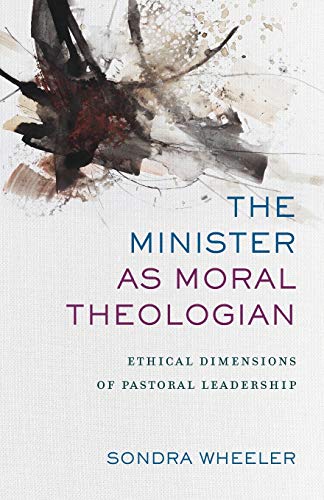 The Minister as Moral Theologian: Ethical Dimensions of Pastoral Leadership

There are many different roles that a pastor or minister fills, such as preacher, teacher, leader, shepherd, and counselor. Recent works have sought to reclaim the pastor’s role as a “theologian,” and this volume by Wesley Theological Seminary Professor of Christian Ethics, Sondra Wheeler, highlights the pastor’s role as a “moral theologian.” Wheeler defines moral theology as the “exposition of how [one’s] theological commitments shape [one’s life] in the world” and contends that any person engaged in ministry does this sort of theology (p. 2). While there are other works that discuss ethics for ministers (such as Joe Trull and James Carter’s Ministerial Ethics [Grand Rapids: Baker, 2004]), this book is unique in that it explores how a minister serves as an ethicist (pp. xi–xvi).

The opening chapter of the book (pp. 1–25) explores what it means for the minister to serve as an ethicist for a local, moral community in what he says and does and doesn’t say and doesn’t do. This discussion lays the foundation for the following chapters that address the moral components found in preaching (ch. 2), teaching (ch. 3), counseling (ch. 4), and one’s living example (ch. 5). The opening chapter also gives a “brief and nontechnical” (p. 13) overview and evaluation of various ethical theories (duty, consequence, and virtue) to help pastors think about ethics.

Chapter 2 (pp. 26–58) focuses on how preaching is an important element in the task of moral theology. The author offers some guiding thoughts on preaching when there has been a tragedy and on texts that give seemingly impossible demands on a follower of Christ, trouble modern readers, or address issues around which there is moral controversy in the community. Wheeler notes that there is great danger in preaching on moral issues, but that this danger should lead one to do it carefully rather than avoid doing it, as failing to say something makes a statement as well. The chapter contains great practical suggestions, such as the importance of providing other places besides the Sunday sermon for further discussion on difficult texts and issues since preaching is monological and good ethical consideration often requires some dialogue and discussion for proper understanding. Above all, Wheeler stresses the need to speak about difficult topics and in tough times, acknowledging hard texts and troubling situations rather than ignoring them or glossing over them.

The chapter on teaching about moral issues (pp. 59–84) focuses on helping people think and talk about ethical issues, something that seems to be greatly needed in the current climate in which people rarely engage in thoughtful, civil debate about issues. Since Wheeler comes from a Wesleyan background, it is not surprising that she advocates using the four elements of the Wesleyan quadrilateral (Scripture, tradition, reason, and experience) as resources for ethical thought. She does not state that these four elements have equal authority, and she notes that all theological traditions draw upon them in some way even when they articulate and emphasize sola Scriptura (see p. 67). In the course of her discussion, Wheeler addresses some potential misnomers about some of the categories, for example noting that reason is more than science and that experience is not simply individual experience but also that of communities. In addition to gaining insights into ethics, a non-Wesleyan reader may gain a new appreciation for the method of that tradition through this chapter.

In discussing the role of the minister in counseling in the fourth chapter (pp. 84–110), Wheeler highlights that pastoral counseling is different from other forms of counseling in that it truly is a moral task; one does not have to stay objective like other counselors but should seek to speak about ethics and right and wrong. That said, pastoral counseling should not be telling people what to do as much as helping them to think properly, asking questions that might help them understand the moral implications of their choices. Among the helpful strategies in this chapter are seeking to engage the counselee’s imagination (pp. 104–7) or asking him to write a letter explaining his choice to someone whom it will hurt (pp. 108–9).

The final chapter (pp. 111–37), dealing with the moral example of the pastor, does not call for perfection in the pastor but highlights the need to have an overall pattern of growth that can be seen by others. It is a reminder that there is power not just in the words of the minister but also in the life. Major sections of this chapter examine how love (as defined by 1 Cor 13) can serve as a guiding principle in ministry, the importance of leading through conflict, and some practical pieces of advice for pursuing godliness in the midst of the unique challenges in ministry. At multiple points in this chapter, Wheeler points to further discussion of issues that will appear in a forthcoming companion volume, Sustaining Ministry: Foundations and Practices for Serving Faithfully.

Overall, this book is a welcome addition to the field of pastoral theology, as it addresses an issue underexplored in other works in a readable style featuring many practical insights. At times, Wheeler’s stance on particular ethical issues is unclear (e.g., see p. 48 and mention of texts discussing divorce and sexuality as texts that are troubling to modern readers). However, even if one would disagree with Wheeler in terms of a particular issue, one can learn from the overall approach to the issue of moral theology as well as the guiding principles and practical wisdom she offers. The book is about how to think about issues and not what to think about issues. Therefore, this would be a great book to read in a course on pastoral ministry or Christian ethics, and the chapters on preaching and counseling could also serve as additional reading for classes on those subjects. Seasoned pastors would also be wise to consider this volume, as it helps ministers gain a greater understanding and appreciation of their role as a local ethicist or “moral theologian” and also offers new tools to address ethical issues and help congregants think about ethics.