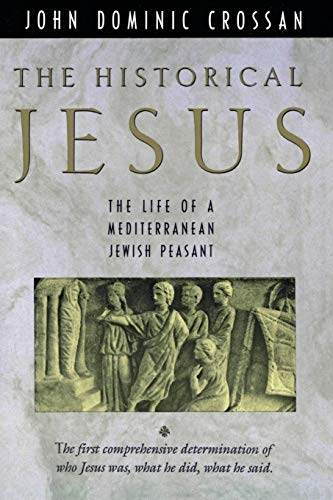 The Historical Jesus: The Life of a Mediterranean Peasant

This book is divided into four main parts. After an ‘Overture’ listing various Jesus traditions and a ‘Prologue’ discussing presuppositions and methodology, we have ‘Brokered Empire’ (chs. 1–4) and ‘Embattled Brokerage’ (chs. 5–10). These two parts consist of a sociological and anthropological analysis of the history and social movements of Jesus’ day in which Crossan creates a model of social action which can determine what took place in Jesus’ life. This reconstruction of the historical Jesus is found in the third part, ‘Brokerless Kingdom’ (chs. 11–17).

The fourth part consists of various appendixes. The first, ‘An Inventory of the Jesus Tradition by Chronological Stratification and Independent Attestation’, is the basis for Crossan’s conclusions concerning the historical Jesus. After presenting a chronological arrangement of the Jesus traditions, the various traditions are listed according to their attestation by various sources. Thus when we find ‘19 What Goes in [1/4]’, this refers to tradition 19 in the list of traditions (522 in all) which appears in the first or earliest strata of the tradition and is attested to by four different sources.

The result of his analysis is that ‘The historical Jesus of his day was … a peasant Jewish Cynic’ who, in contrast to the religious hierarchy of his day, brokered an egalitarian kingdom of God, broke down the patriarchal family and was non-eschatological in nature. As for the title ‘Son of Man’, this was a later creation of the church which read Daniel 7:13 back into the life of Jesus. Due to the lack of an explicit reference to the bread and wine being the body and blood of Christ in Didache 9–10, the meal Jesus instigated was a symbol of ‘open commensality’ rather than a ‘Last Supper’. The Lord’s Prayer, despite its triple attestation (Matthew, Luke, Didache), is not authentic because if Jesus had taught such a prayer it would have had a wider attestation and, more importantly, it would assume that Jesus established a group of disciples. In the section entitled ‘Resurrection and Authority’, his view can be surmised by this statement: ‘The thesis of this chapter is that the “nature” miracles of Jesus are actually credal statements about ecclesiastical authority …’.

Crossan’s reconstruction of the life of Jesus is a radical one. Despite its date, this book is essentially a 19th-century ‘quest’ clothed in modern sociological and anthropological garb. Although in the ‘Prologue’ Crossan discusses methodology and presuppositions, he does not discuss the most basic presupposition which predetermines the outcome. If one starts out with a methodology closed to the supernatural, it is not surprising that the result is a Jesus who is non-supernatural. (Perhaps it should be mandatory in writing a life of Jesus to state at the beginning where one stands on this issue and to state what the implications of this are!)

Regardless of one’s theological stance, however, there are numerous aspects of this work which are questionable. One involves Crossan’s view of the sources. Crossan’s three main sources for investigating the life of Jesus are The Gospel of Thomas, a hypothetical ‘Cross Gospel’, i.e., the supposed original passion narrative which is best seen in the Gospel of Peter, and the ‘Secret Gospel of Mark’, which supposedly lies behind our canonical Gospel of Mark. The ‘Secret Gospel of Mark’ is, Crossan admits, known only from a letter written by Clement of Alexandria (150–215), which is known only from a fragment copied in the mid-17th century, which in turn is known only from a photograph! A critical analysis of these three sources cannot be undertaken here, but needless to say, few researchers of the life of Jesus would prefer them over Matthew, Mark and Luke!

It must also be objected that Crossan has turned one of the most objective criteria for investigating the Jesus traditions into a most subjective one. Over the years, ‘multiple attestation’ has meant that a tradition was found in such sources as Mark, Q, M, L, John, and the Gospel of Thomas. Assuming, as Crossan does, the priority of Mark and the existence of Q, it is a rather straightforward process to see if a teaching or activity is attested to in various sources. The value of this criterion is completely compromised, however, when the sources are now a hypothetical ‘Cross Gospel’ and ‘Secret Gospel of Mark’. For example, even though the Son of Man title is used in an apocalyptic sense in Mark, Q, M, L and John, Crossan rejects its authenticity by arguing that they are all the result of the creation of this title by Mark. This, however, confuses the question of origin with that of attestation. Ironically, Crossan even uses the criterion of dissimilarity (if there are no grounds for deriving a tradition from Judaism or for ascribing it to primitive Christianity, it must be authentic) in reverse. He argues that the Son of Man title is not authentic because Paul did not use it. Here, one of the most powerful arguments for authenticity is rejected and an attempt is made to use it negatively!

Another question that must be raised involves the relationship between sociology/anthropology and history. A great deal of this book (at least half) deals with recent studies in these areas. Yet how are sociological and historical disciplines related? Which builds upon which? Historical studies seek to establish what happened in the past. Sociological studies then seek to classify and categorize the results of such studies. Crossan reverses this. By the categorization provided by sociological studies, he determines what could or could not have occurred in the life of Jesus. But how can Jesus be unique, if we have predetermined that he must fit within certain categories of behaviour? Yet the Jesus of the gospels is portrayed as unique, a sui generis who fits no human category. He is different in kind, not simply degree. Crossan’s historical Jesus, however, is predetermined from the start. He must fit within certain established sociological categories and models of behaviour.

It was common in the 19th century when writing a life of Christ to produce a Jesus in one’s own image. No-one pointed this out more astutely than Albert Schweitzer in his The Quest for the Historical Jesus. Crossan is well aware of this flaw in the old quest, yet he commits the same error and produces a Jesus who is an advocate of egalitarian commonality, a deliverer from demonic imperialism (read = revolutionary deliverance from colonialism) and one who offers an inclusive fellowship meal of open commensality. He is a Jesus who opposed the dehumanization of women, children and non-dominant males and took the role of a female by taking, blessing, breaking, and giving bread at his ritualized meal. Etc. Such a Jesus appears to be less the product of historical investigation than the author’s looking down a deep well and seeing his own reflection.